Update July 18, 2021: Maplewood Township released a statement with the additional information that there was a “sudden smell” of chlorine — although not specifically stating what made people ill. The township reports that the pool is safe, that the township health officer is working with families, and that the pool will be open Sunday, July 18. Village Green is continuing to follow up.

Numerous parents have reported that their children became ill on Saturday, July 17, after a greenish, brownish plume appeared in the main pool at the Maplewood Community Pool complex accompanied by a strong odor of chlorine, with several reporting that they had taken their children to area urgent care centers and hospital emergency rooms with trouble breathing, vomiting, blue lips, lethargy and coughing. At least one child was admitted to the hospital overnight.

Parents reported the illnesses on the SOMA Lounge Facebook group, as well as by contacting Village Green via email, FB messenger and text.

Parents said that the trouble began just before a green-brown plume was released from the pool filter near the ramp of the main pool at around 12:45 p.m. They reported a strong odor of chlorine. (One parent reported smelling a strong chlorine odor closer to noon.) 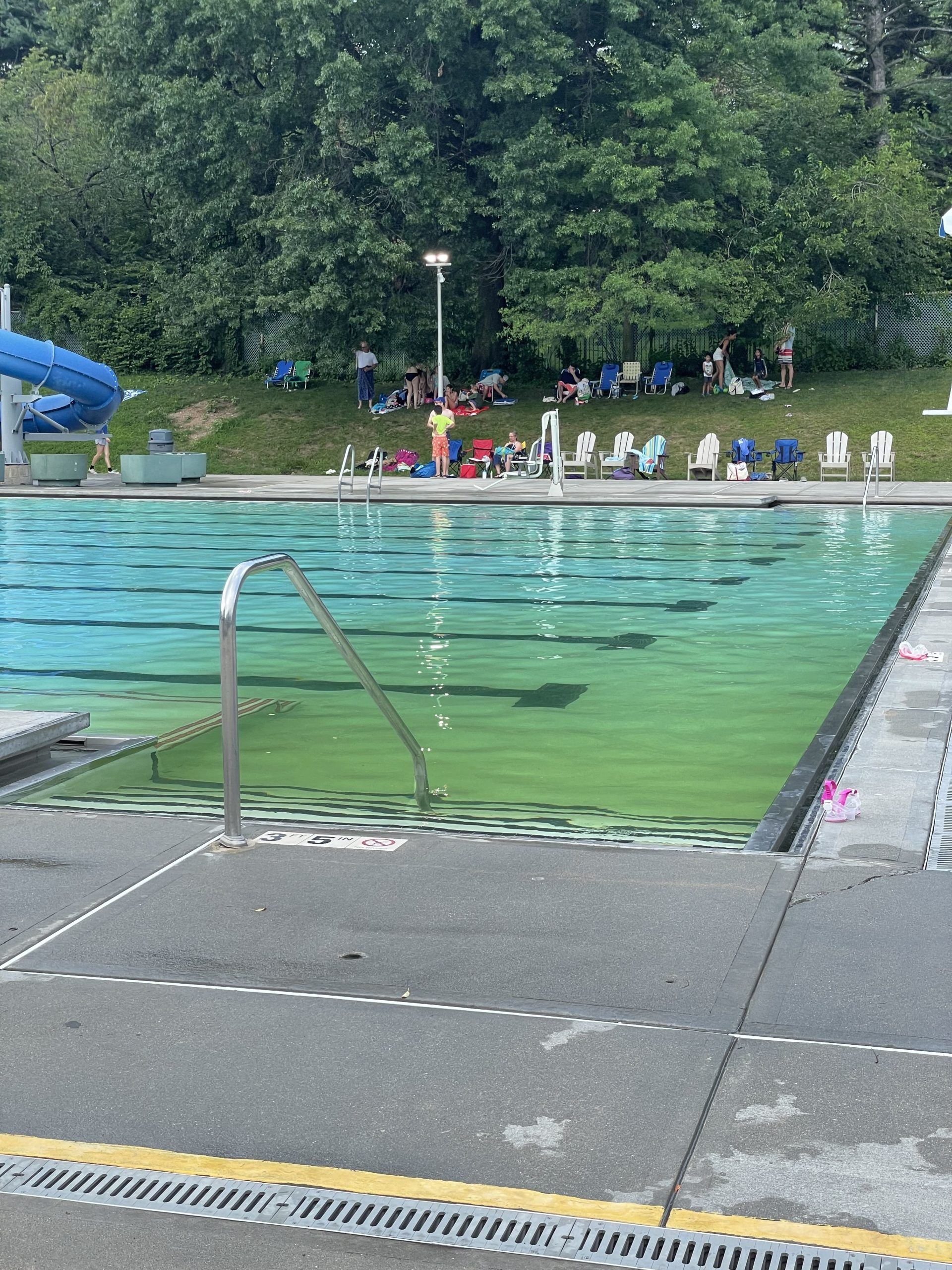 The Maplewood Pool on July 17, 2021, after an apparent mechanical failure

“The jets turned on really high for a minute (which I thought was weird, but didn’t think anything of it),” Michael Kirkwood wrote to Village Green. “Then we smelled the chlorine and the water was turning green / brown. We got out as quickly as we could along with everyone else. Basically we breathed in the chlorine and then started coughing.”

Kirkwood said his five-year-old son “vomited at the pool right after he got out and has been lethargic. Took his first nap in 2 years. Our pediatrician advised us to call 911 if he had genuine trouble breathing but he got a little better so we’ve just been monitoring him.”

“I know my son was coughing like he has never before, so bad he could barely breathe, couldn’t talk,” another parent of a six-year-old told Village Green. “Once I knew it was bad I grabbed him [and] came home to give him a breathing treatment,” said the parent, whose son has a history of asthma as a baby but has not had symptoms in the last few years. He continued, “I almost called 911 from my house.”

The parent, whose son seems to have recovered, said he remains concerned about what the boy might have ingested and whether he could have breathing issues in the future. “Something caused my son and others to cough so severely that it made breathing difficult for a prolonged period.”

However, Maplewood Director of Community Affairs Melissa Mancuso reported on SOMA Lounge, “Today we experienced a mechanical problem that caused a main pool filter issue that has now been resolved. As the system restarted we saw sediment cloud the main pool, so we closed it as a safety precaution. There was no chlorine or other chemical spill.”

Parents pushed back on that statement.

One mother wrote on SOMA Lounge, “My kids are in the hospital. Can’t breath well. One is throwing up. Don’t tell us that wasn’t chemical? Please tell us what it is, so we can tell the [doctors].”

Another father posted, “My son is at the hospital. He threw up several times and is now on oxygen. How can you say there was no chemical spill? What was that brown liquid my kids drank?”

At approximately 4:20 p.m., the Township posted this following statement on its Facebook page:

Good afternoon Maplewood residents. Please be advised that there was not a chemical or gas leak, as stated on social media, at our swimming pool today. The result of the discoloration was from sediment/dirt as a result of a brief malfunction of the pool filter. The pool water is tested every two hours and has passed all tests. It will continue to be tested as we get ready to reopen tomorrow. The pool is currently closed due to weather and will remain closed for the rest of the day as we prepare for tomorrow’s re-opening.

On Sunday, July 18, the Township released a statement on the “malfunction … within the filtration system” with the additional admission that “some experienced a sudden smell of chlorine as the filter was restarted.” While the statement did not explicitly state that there was a chlorine gas emission or explain specifically how that happened or how the township would guarantee it did not happen again, the message continued, “We deeply apologize that this malfunction occurred and we are working with a third-party vendor, CFM, on testing and a retrospective evaluation regarding yesterday’s malfunction.”

The Township statement also reported that “our health officer has contacted the families impacted by the malfunction and we will work with them” and that the pool would be open on Sunday, July 18.

The statement continued, “We have worked closely with a third party contractor and have specifically identified what occurred and we know why it occurred. Furthermore, we have taken all the necessary steps to fix the problem and we have been assured that based on the contractors actions and our follow up procedures this will not happen again.”

Village Green will continue to follow this story. In particular, we have asked township officials if they can specify what caused children to become ill and if they can provide more information on how/what was “specifically identified” as occurring as well as what are the “necessary steps” taken to fix the problem and assure “this will not happen again.”