From the Archdiocese of Newark Office of Communications and Public Relations:

The pastor of St. Joseph Church in Maplewood performed a musical meditation for Ukraine on April 8, raising funds for the shipment of much-needed supplies to the war-torn nation in the process.

Father Jim Worth’s concert brought in nearly $1,000 from the approximately 100 people in attendance, which included Maplewood Mayor Dean Dafis, Deputy Mayor Vic DeLuca, and numerous members of the North Jersey Ukrainian community. But the money was not the only reason Father Worth performed. By playing the piano while singing uplifting songs, Father Worth hoped to inspire those listening to work towards peace.

“Our first recourse is to pray for a conversion of hearts in all those who are displaying hate,” said Father Worth, who performed songs like “Can You Feel the Love Tonight?” and “Behold the Cross” as a statement of peace. “Then we must use our time, our talent, and our treasure to help our Ukrainian brothers and sisters, some of whom live in our own backyard. It’s the right thing to do. When our neighbor hurts, we all hurt.”

St. Joseph Church has done much to support the Ukrainian people in recent weeks. In addition to holding the musical meditation and a March prayer service, the parish has collected numerous medical, military, and baby supplies from the Maplewood community. It has also raised close to $10,000 — including the $1,000 from the concert — to pay for shipping costs. These resources will be donated to Maplewood’s Ukrainian Orthodox Church of Holy Ascension, which will distribute all materials to its contacts in Ukraine.

“I thank Father Jim for reaching out to our parish very early to offer help and support,” said Father Sviatoslav Hot, the Ukrainian Orthodox Church of Holy Ascension’s pastor. “Our friends and family in Ukraine have watched the livestreams of our prayer services and other events and are impressed and appreciative of the community support that we have shared. They truly see that the whole world is praying for their safety and the liberty and freedom that they are fighting for.” 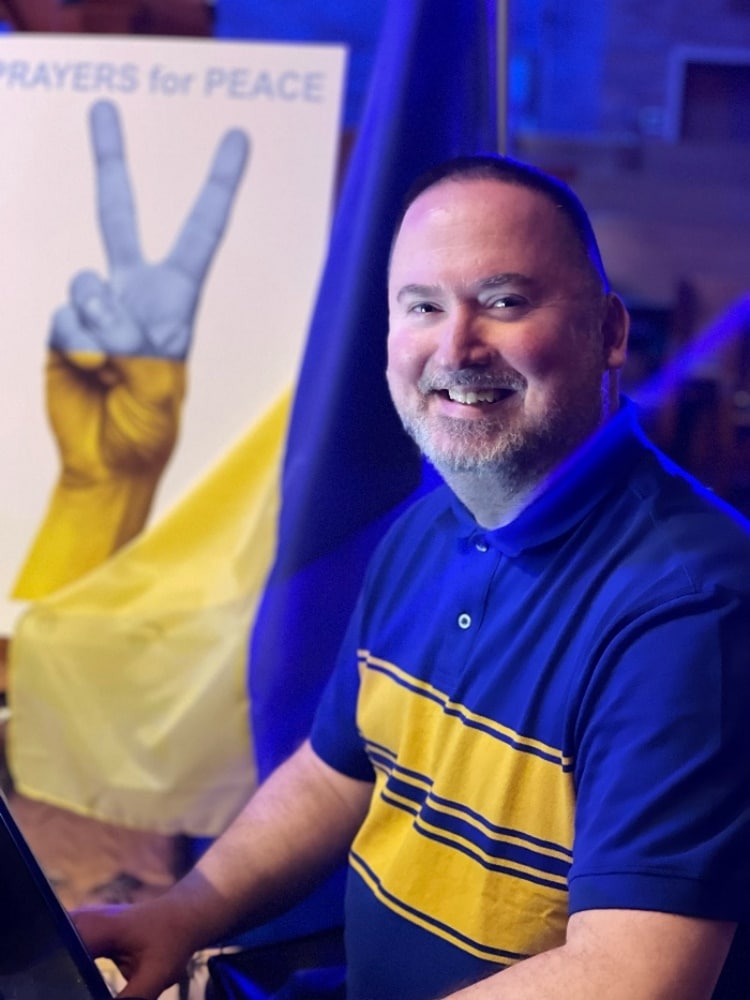 Father Jim Worth performs a medley of uplifting songs to raise money for Ukraine aid during a musical meditation at St. Joseph Church in Maplewood on April 8, 2022. (Photo by Victoria Hot) 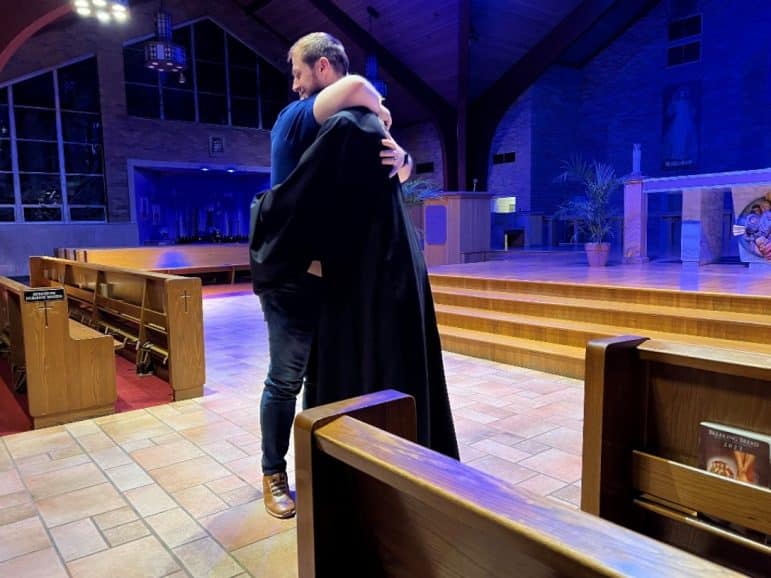 Father Jim Worth embraces Father Sviatoslav Hot during a musical meditation for Ukraine at St. Joseph Church in Maplewood on April 8, 2022. (Photo by Victoria Hot) 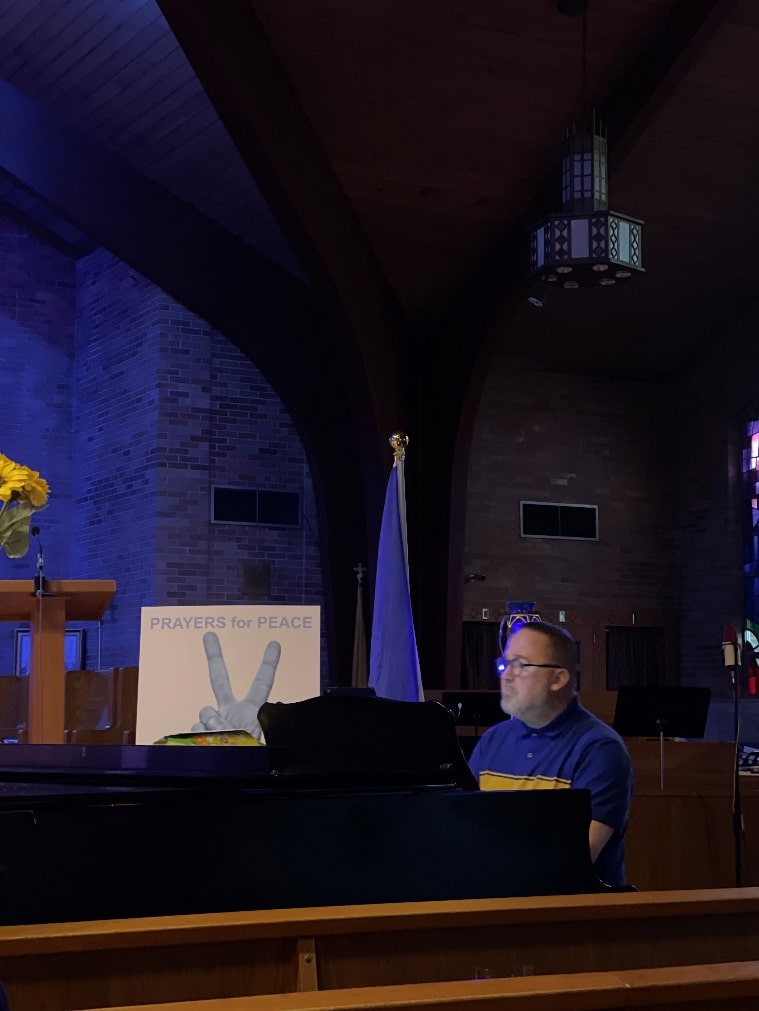 In addition to his musical meditation, Father Jim Worth and St. Joseph Church in Maplewood have collected about $10,000 to ship supplies to Ukraine. (Photo by Victoria Hot) 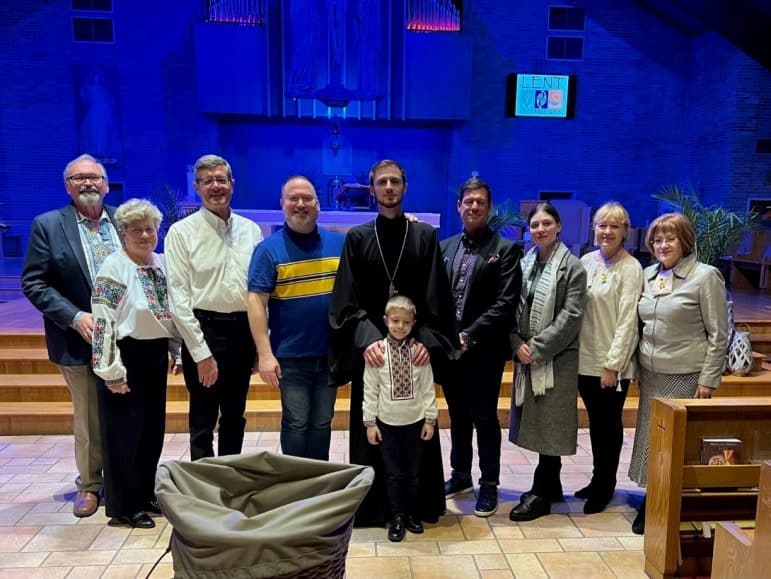