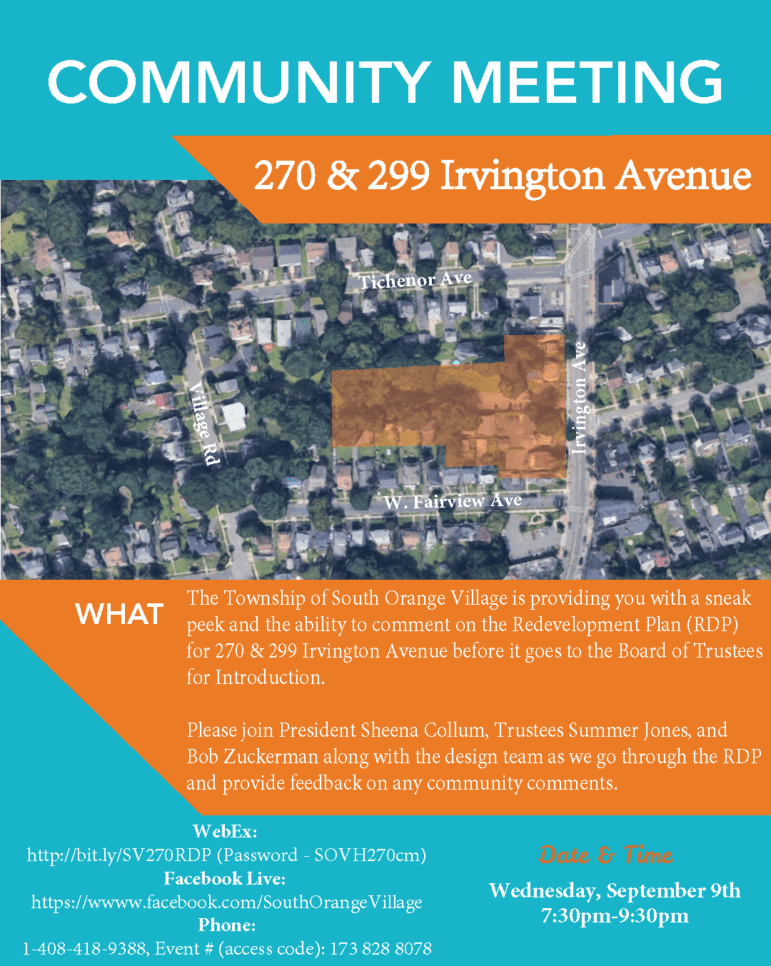 The South Orange Board of Trustees is hosting one more community meeting before introducing a redevelopment plan ordinance for a 60-unit mixed-use housing development at 270 & 299 Irvington Avenue. The proposal includes 12 units of affordable housing.

NOTE/CORRECTION: The project is asking for a 5-year short-term tax abatement that steps up over 5 years – 20, 40, 60, 80 to 100%. This article originally and incorrectly reported that the project developer was not seeking an abatement.

The final community meeting will take place virtually on September 9 at 7:30 p.m. via WebEx and Facebook Live and phone.

“We’ve committed to public and the neighborhood that we will have one more session before introducing the redevelopment plan,” said Village President Sheena Collum in July. She predicted then that the community meeting would take place about a week before the plan’s introduction.

Plans for the project are available on the southorange.org website, which stated in July, “We expect to see a submission within by September/October 2020 from the Developer.” Feedback is being accepted at https://bit.ly/270Feedback.

The Township previously held community meetings about the proposed development on February 5 and June 17, 2020.

While the town rejected a proposal to build 49 residential units on the 270 Irvington Avenue property in 2015 and a potential development in 2017 fell through, property owner Saiyd Nagim is now proposing a total of 60 units spread out across two properties — with some across the street at 299 Irvington Avenue. The proposal could bring between 10,000 to 15,000 square feet of commercial space.

From the Township of South Orange:

As promised, we have scheduled our next community meeting for 270 & 299 Irvington Avenue on Wednesday, September 9, 2020, at 7:30 pm.  This meeting will focus on the Redevelopment Plan (RDP) before the introduction to the Board of Trustees.  The meeting will be held virtually via WebEx and Facebook Live.  Prior to the meeting, we will have a copy of the RDP on the project plan.