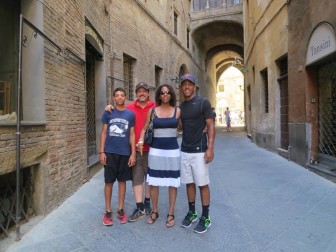 Tanya Gibson-Clark with husband Brian and sons Brendan and Quincy.

Tanya Gibson-Clark of South Orange passed away today. She is survived by her husband Brian Clark and sons Brendan and Quincy.

Gibson-Clark worked as an actress and dancer, at one point performing with Al Pacino in the Circle in the Square Theater’s 1992 production of Oscar Wilde’s Salome — a production attended by her future husband who wrote her a note after being enthralled by her presence and performance. (See The New York Times’ Vows column detailing their courtship here.)

Tributes are pouring in to Gibson-Clark’s Facebook page, where one friend called her “true artistic mentor and rare soul.”

Gibson-Clark had been battling a liver disorder.

There will be an hour-long service followed by a reception and celebration of Tanya Gibson-Clark’s life on Saturday, March 5, from 12 p.m. to 5 p.m. at the Maplewood Tennis Club, 489 Ridgewood, Road, Maplewood.

Parking is limited so guests are advised to arrive early.