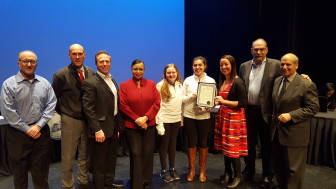 Sisters Quinn and Emma Joy, who helped launch the “Girls Helping Girls Period” campaign to collect feminine hygiene products for girls and women in need, were honored on Monday night with a proclamation from the South Orange Village Board of Trustees.

The campaign was so successful (the girls say they have aided more than 150 young women thus far) that the South Orange-Maplewood School District has since expressed interest in working with the effort. The campaign has captured the imagination of many for filling a need that many had overlooked. Noted Village President Sheena Collum, “This is expanding well beyond the boundaries of South Orange and Maplewood.”

Said Trustee Deborah Davis Ford, “It never even dawned on me that this was an issue. I’m surprised that I as a female never thought of that.”

See the proclamation as part of the Board agenda here.