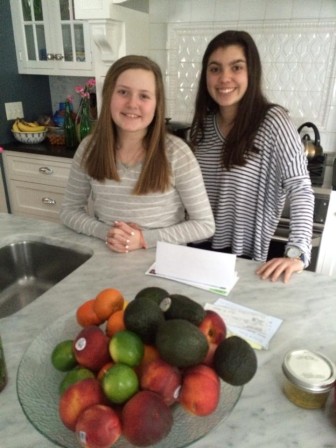 Editor’s note: donations to Girls Helping Girls Period will be accepted through the end of March.

When South Orange sisters Emma (14) and Quinn (11) Joy were volunteering on a project to collect canned goods for a local food pantry last fall, they were shocked to learn that feminine hygiene products are not covered by the Supplemental Nutrition Assistance Program (SNAP), better know as the food stamp program.

“It startles me that such an important necessity for girls is considered a luxury toiletry,” said Quinn, a sixth-grader at South Orange Middle School. “Some girls can’t even go to school because they cannot properly prepare themselves…It is important that money isn’t a roadblock for getting feminine hygiene products for some women.”

“Missing school on a monthly basis is unimaginable,” said Emma, a freshman at Columbia High School. “This issue is a matter of self dignity and respect for others.”

With the support of their mother, Elise, the Joy sisters launched “Girls Helping Girls. Period,” a campaign to collect feminine hygiene products — and cash donations to purchase them — for girls and women in need.

Through – the end of March, GHGP is collecting donations of tampons, sanitary pads, or panty liners, or gift cards or checks. The Joys will donate the items to a local shelter or food pantry. GHGP also seeks to raise awareness of the issue, and to encourage others to find ways to collect items.

Elise said so far, there were enough donations collected for 30 women to use for a year, and their goal was to supply 100 women.

Feminine hygiene products cost roughly $70 a year for the average woman. While that might not seem like a great deal of money to some, it can be a true hardship for low-income or homeless girls and women.

“While we would ultimately love a change in policy, our main focus is to spread awareness about the simple fact that so many girls and women can’t afford the products,” said Elise. “We want the stigma around periods to go away. It’s stupid.”

Recently, the Joys hosted an open house and asked people to bring donations. They are inspiring others by their example: one local family is hosting a mother-daughter tea,  another is having a potluck dinner. Fringe Salon in Maplewood is asking clients to donate, and is also a collection point.

In a recent blog post on The New York Times, Jennifer Weiss-Wolf, a Maplewood mother whose family is involved with the campaign, said her family will post a Valentine’s Day challenge on Facebook, “asking friends who plan to exchange heart-shaped boxes of chocolate to simultaneously donate a box of tampons.”

Despite the campaign’s name, Elise stressed that this isn’t just a female issue, “it’s a human issue.” She noted that the project has received a great deal of support from men, and they hope to encourage boys to participate as well. “Educating boys on…’female’ issues is the key to actually making change,” she said.

Quinn puts it succinctly: “This problem needs recognition from anyone. It’s not just about girls helping girls, it’s everyone helping each other.”

The girls are not strangers to volunteering. “My parents always reminded us that giving back is a good deed,” said Quinn, who assists at a sports clinic for developmentally disabled kids and teaches art classes (“Crafting with Quinn”) at senior centers. Emma has tutored and volunteers at the Interfaith Food Pantry of the Orange. She completed a “1000 Can Challenge” in the fall, which was profiled in the News-Record.

Elise Joy was proud of their efforts, but wanted to find a way to show them the impact they were having, “even little by little.” She helped her daughters to create Small Acts, a group to inspire volunteerism, especially among young people. GHGP grew out of that initiative.

“I like to think about the difference I am making by doing something so small,” said Quinn.

The teens offered some advice to kids who want to volunteer but aren’t sure how to begin.

“Start off by thinking of some things you like to do,” said Quinn, “whether it’s sports, art, or a skill that you have, and find a way you can help others. Also you can think of some problems in your own community that can be improved and make your own from there.”

Emma added, “If you are looking to make volunteering a lifelong project…try to find something that you enjoy so not only are the people you are helping benefit, but you can make a fun learning experience out of it.”

She continued, “What I like most about volunteering is seeing the smile on someone’s face that you are helping and knowing that you are making a direct impact in their life.”

To support GHGP, drop off donations of tampons or pads, or gift cards or checks, at any of the following collection points: