As a tribute to the woman they called their “grandmother,” the South Orange Rescue Squad (SORS) will dedicate its new headquarters to Mary L. Connor, who passed away July 17, for her years of selfless service to the squad and community.

“She was indeed an amazing lady,” said SORS Captain Dan Cohen. “She was like a mother and grandmother to many of us.” Former squad members came from all over the country for her funeral, some to serve as pallbearers for her funeral on Wednesday.

A small procession including SORS squad members, ambulances and members of the South Orange Police Department drove from Preston’s Funeral Home to Our Lady of Sorrows Church, pausing briefly in front of the site of the former headquarters that Connor “loved so dearly” and the site of the new one which will be dedicated to her memory, Cohen said. Upon arrival at Our Lady Of Sorrows, a bagpiper played and South Orange Firefighters stood in formation as the pallbearers  (all South Orange Rescue Squad members) carried Mary into the church. In addition, South Orange Firefighters flew village flags at half staff in her honor.

Connor joined the squad in 1969. In her tenure, she served both as volunteer President and Captain.

Former SORS EMT Marissa Drzewiecki wrote on Facebook that Connor was “the epitome of volunteerism.” She continued, “I will miss you at squad meetings and holiday parties in your tracksuits, I will miss your laugh when I make a joke about computers that you don’t understand, but most of all I am sad that I never came over to teach you how to use your computer. I am sad that I no longer will I be able to be in the presence of a woman that has dedicated so many years of her life to helping others. If I am half of the woman you were it will be an accomplishment.”

South Orange Police Chief Jim Chelel said that in her tenure on the SORS as well as her time as a crossing guard for the Police Department, Connor touched many lives. “She gave much of her time freely to better the lives of others. The Village was fortunate to have someone who gave so much back and made our community a better place to live.”

Former SORS President Sharon Mayers Schwarz said Connor interviewed her for a job on the squad 28 years ago. “Mary was a devoted member. She kept up with her training all these years. She insisted that the rescue squad members be dressed appropriately and act professionally. Mary and I rode every Monday night for so many years. She was my ‘crew chief’ to begin with and I learned valuable lessons from her.” 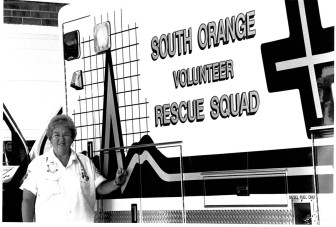 Jeff Hark, long-time SORS Member, said “Mary was the core and gave so many young people a sense of purpose and direction, not to mention the countless lives she helped on the Squad.”

Ken Greene, another long-time member, shared a similar sentiment. “Mary loved the Rescue Squad. She bled green and white (the squad’s old colors). She cared about us as her own family,” said Greene. “She instilled in all of us what it meant to devote oneself to helping others. She will be missed by those who answered the call alongside her.”

Mike Bolger, Former South Orange Police Lieutenant, also commented: “She was as devoted to South Orange and SORS as anyone I’ve ever known. She also had infinite patience with the many rookie police officers whom she shepherded through the various medical calls we bungled.” 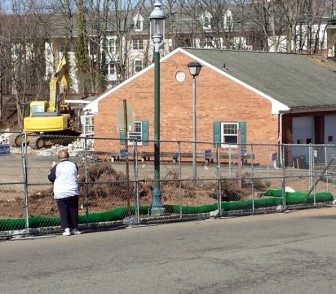 “Mary was heartbroken about our former headquarters being torn down — a place that had basically been like home to her for decades,” said Cohen. “She would ask me every day about when the demolition was set to begin because she wanted to be there. When the day came, SORS member Ken Greene took the picture of Mary standing at the fence with tears in her eyes, watching as they began to knock the building down. She was very excited about [the plans for a new building]…it breaks our hearts that she won’t be there when the doors open this fall.”

Connor is not the first member of her family to be leave a lasting legacy to South Orange — the official name of the South Orange Community Pool is the Peter S. Connor Memorial Swimming Pool. Mary’s brother Peter was a Staff Sergeant in Vietnam when the timing pin on a grenade malfunctioned. “Sgt. Connor instantly realized that throwing the grenade would injure or kill his fellow soldiers, so he instead held it close to his body and dove on top of it — sacrificing his own life to save those of his comrades,” said Cohen. Connor was posthumously awarded the medal of honor. 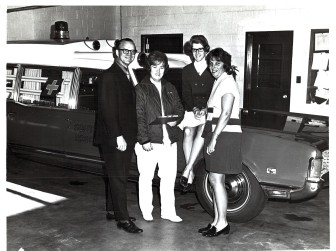 Photo sent to The Village Green by Dan Cohen

“Mary also put other’s lives before her own, and there would be no way to calculate the number of lives she saved during her decades of service on the Rescue Squad,” Cohen continued. “For many years, the most frequent question I am asked by patients and their families is ‘Do you know Mary?’ She has been an institution in the community and it seemed tough to come across anyone who hadn’t been helped by her or knew her in some way.”

Said Drzewieki, “Cheers to you Mary Connor. I hope they serve bottomless White Russians in heaven, because you deserve it!”

Photos are courtesy of Dan Cohen.