You never know who’s going to show up at the Maplewood Ideas Festival. 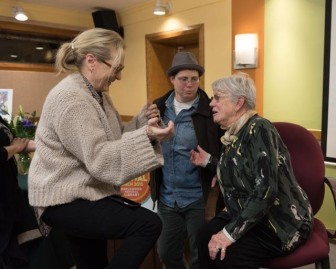 Last year, none other than Meryl Streep made a surprise appearance, at a lecture being given by acclaimed costume designer Ann Roth.

Only in its third season, this free, weeks-long arts and culture festival hosted by the Maplewood Memorial Library has already become a don’t-miss annual event. Featuring lectures, performances, conversations and more with some of town’s most talented artists and creative professionals — including Tony, Oscar and Pulitzer prize winners — the Ideas Festival drew more than 1,300 attendees last year.

This year, acclaimed Maplewood author Dan Barry will receive the 3rd Annual Maplewood Literary Award. Also on tap will be actor Norbert Leo Butz, and a special appearance by world-class fencer Ibtihaj Muhammad, who is about to make history at the summer Olympics.

Here is more information from the Maplewood Memorial Library:

Belle and Books
Meet cast members of Columbia High School’s production of Beauty and The Beast as they read stories and perform musical numbers from the play! Watch as a makeup artist transforms a cast member into The Beast. There will be a Q and A session afterwards. Tuesday, March 15   4 pm at Main Library

Secrets Skeletons TellDiscover how scientists and detectives gather evidence and clues to figure out what happened in the past. Facilitated by Author Marc Aronson, with New York Times science writer Jon Gertner, science teacher John Mead and Detective Raith of the Maplewood Police Department. Tuesday, March 29   4 pm at Main Library

Rebecca Blumentstein and Ilena Silverman In ConversationRebecca Blumenstein is Deputy Editor in Chief of The Wall Street Journal. Ilena Silverman is the Features Editor at the New York Times Magazine. The conversation will be moderated by Brooke Lefferts, the U.S. entertainment video editor for The Associated Press. Saturday, March 26 2 pm at Main Library