“Eventually all things fall into place. Until then, laugh at the confusion, live for the moments, and know EVERYTHING HAPPENS FOR A REASON.” — Albert Schweitzer 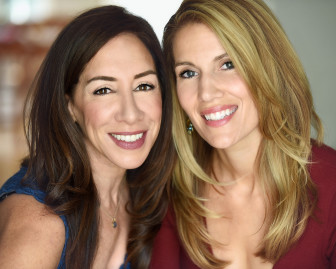 All the single ladies, all the single ladies….Beyoncé might sing it best, but no one relays the message with more heart and soul than Maplewood residents Suzanne Riss and Jill Sockwell in their newly released book ”The Optimist’s Guide to Divorce: How to Get Through Your Breakup and Create a New Life You Love.”

Having possibly crossed paths hundreds of times – at the grocery store, the local library or a school function – they finally came face to face in late 2011 when a mutual friend recommended the two moms meet. At that time, Riss, a freelance journalist, was in the initial throes of a separation from her husband. Sockwell, a real estate agent was navigating her own divorce process.

“My initial reaction was we’d meet for coffee, share a few stories and go our separate ways,” says Sockwell. “I’m a strong believer that to stay happy and healthy, we must stay positive. But divorce is a difficult time and meeting Suzanne turned out to be just what I needed. She gave me a lot of hope.”

“We came to realize that by talking and just being there for one another, the challenges were actually an opportunity to grow and make things better,” added Riss. “We even had a lot of laughs.”

From this new friendship and the realization that there are others out there who could benefit from the same kind of support, the Maplewood Divorce Club was founded. What started with 50 single woman from Maplewood/South Orange, along with adjoining towns, has grown to a sisterhood of 100 strong. This micro-community is built on the foundation of the friendships formed between the newly single mothers and the benefits of sharing experiences. The close-knit group has even established several holiday gathering rituals. A single Mother’s Day picnic in the park and an annual Labor Day “Glamping Trip” help alleviate the void of a spouse during these special occasions.

Like any good former copywriter and researcher, when Sockwell first separated from her husband in 2010, she journeyed to the divorce section of the bookstore hoping to learn from other woman who had already navigated the process. “What I found was either a lot of dry, clinical jargon or memoirs written by women who have travelled around the world in pursuit of self-discovery,” Sockwell explained. “But nothing really offered insight directly from women who have experienced divorce. I was looking for practical advice.”

So together, Riss and Sockwell set out to further their efforts by collaborating on a book that prepares the reader for every phase of divorce. With heart, humor and most of all encouragement, “The Optimist’s Guide to Divorce: How to Get Through Your Breakup and Create a New Life You Love” depicts the experiences of divorced women through the voices of Riss and Sockwell in addition to ten composite characters who share real-world guidance, smart strategies and memorable personal stories.

See the press release for the book below: 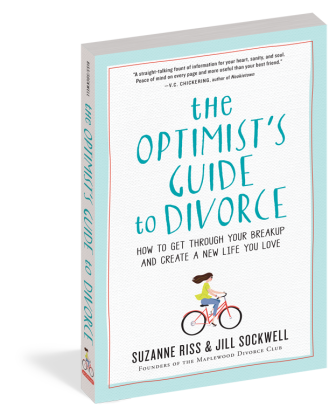 “We each brought something different to the creative process. Just like the formation of the Maplewood Divorce Club, the endeavor proved to be therapeutic for Jill and me,” remarked Riss. “We would give each other small assignments and although work schedules and children –especially as a single parent — make for little extra time, Jill and I agree the effort we put into both the group and book are well worth it and a great source of pride.”

On Thursday, January 26, meet Riss and Sockwell at Words Bookstore in Maplewood at 7:30 pm for a signing of their inspiring gem. No matter what your marital status, for anyone looking for some words of wisdom on the importance of having a positive attitude and working on our most important relationship – ourselves — join the after party at Coda Restaurant in Maplewood Village. And with featured drinks called “Oh no he didn’t” and “Libertini” you’re assured a few good laughs.