The Village Green May 11, 2022
0 FacebookTwitterPinterestEmail

From Maplewoodstock Music and Arts Festival:

Let’s get ready to be All Together Again. Our beloved Maplewoodstock Music and Arts Festival is back for its 17th year. After two years and multiple postponements the event will take place on the weekend of July 9 and 10. Music begins at 12 noon and continues into the night.

“We’re so excited to be back,” declares Maplewoodstock Volunteer Committee Chair Tom Kerns. “The starts and stops were frustrating, but everyone involved including the headlining bands, township officials and vendors were extremely patient and cooperative.”

Tarquin Learned, who chairs the music selection committee. said, ‘We’ve been hand-in-hand with Galactic (the eclectic funk/ R&B/world music band from New Orleans who are headlining Sunday night), through the multiple dates and cancellations and they are more pumped than ever to perform at our little festival.”

“The layout this year will be a bit different than in past festivals,” says Kerns. “The music will continue to be performed in the amphitheater (the hill opposite the train station on Dunnell Road), but other aspects such as the food and art vendors and the beer and wine garden will be in different places.”

According to the MWS committee, the new layout is not finalized at this stage. Katie Clayton, who manages the art vendors, has been instrumental along with other members of the committee in designing the new layout. 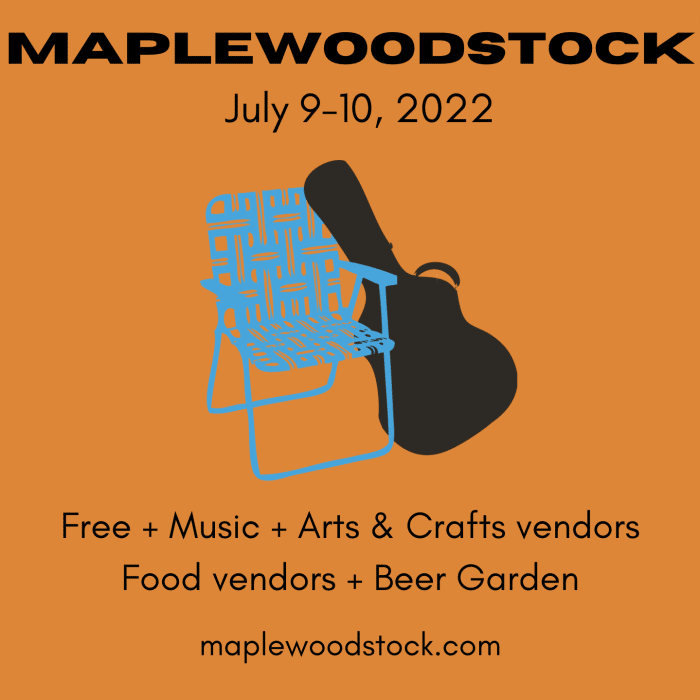 According to Clayton, “While we are all excited to be able to gather again as a community we recognize that Covid is still with us. The resulting changes will allow for less crowding around the vendors. In addition,” Clayton says, “we need to preserve the amazing work done by the Maplewood Memorial Park Conservancy to enhance and preserve the plantings in this historic park. The new layout will be designed keeping these two considerations in mind.”

Another change for this year’s event will be the introduction of a new canopy lottery system which will be managed by Maplewood resident and volunteer Brad Goldman. Details of the lottery system will be announced soon.

Maplewoodstock is funded by advertisers, sponsors, vendors, donations and merchandise sales. As per Kerry Miller, who manages merchandise sales, “We have inventory from 2020, 2021 and 2022 to sell this year. We will begin selling all of it at MayFest on Springfield Avenue on May 15th as well at various dates in Maplewood Village and on Springfield Avenue leading up to the event.” Please keep an eye out for our tables.

In addition to Kerns, Learned, Clayton and Miller, the other members of the Maplewoodstock Volunteer Committee are: Kevin Chandler, Jim Robertson, Susan Rogers, Jamie Ross, and Gary Shippy.