NJ Pride Presents ‘The Hunger’ with Bowie and Deneuve at SOPAC Feb. 11

C.J. Prince is the executive director of North Jersey Pride.

When I was a teenager, I wasn’t so into vampires. It was the 1980s and vampires were still pretty unlikable characters. It would be decades before popular shows like “Vampire Diaries” and films like “Twilight” would humanize the creatures of the undead. I was definitely not a fan. Who wanted to see all that stabbing and bloodsucking? Feh.

Or at least, that’s how I felt until the vampires in question were played by David Bowie, Catherine Deneuve, and Susan Sarandon.

The Hunger, directed by Tony Scott (Top Gun, Crimson Tide), is a “stylishly gothic” tale of a centuries-old Egyptian vampire, Miriam (Catherine Deneuve) and her centuries-old lover, John (David Bowie). Although Miriam can grant her lovers a long life, eventually they die, one after the other, leaving her heartbroken and alone. When John begins to age rapidly, Miriam sets out to seduce Sarah (Susan Sarandon), a doctor who researches premature aging. 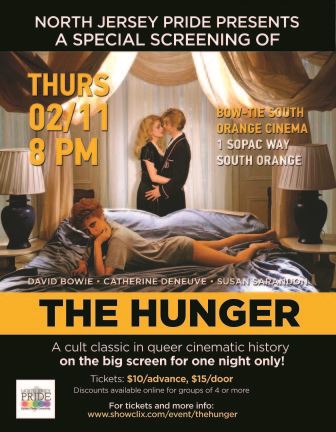 By today’s standards, the love scene between Deneuve and Sarandon would be considered tame. Not so in the ’80s, when it sparked some heavy controversy. Even Sarandon’s mother received hate mail over it.

But LGBTQs everywhere, myself included, thrilled to at least a semi-positive portrayal of lesbians on the big screen. Okay, so they’re blood-sucking vampires. Alright, so they kill innocent people—but not because they’re psychopaths, but because, well, a girl’s gotta eat. The Hunger is ultimately a love story in which the heroine, while flawed, is neither a suspected pedophile (The Children’s Hour) nor a knife-wielding lunatic (Cruising). In 1983, that was certainly something to celebrate.

The Hunger also features one of David Bowie’s most memorable performances in film, depicting, with great depth, the fear and anguish a man feels facing his own mortality as his affliction rapidly bears down on him.

Bowie lost his own battle with cancer on Jan. 10th, and the world lost a visionary artist. He will be remembered not only for his ground-breaking music and his androgynous, ostentatious personas, which gave a generation of wary LGBTQ onlookers “permission” to be different, but also the depth and soul he brought to the mesmerizing characters he played in film.

As a tribute to him, and in celebration of how far we have come these last three decades, North Jersey Pride will be screening The Hunger on Thurs., Feb. 11 at the Bow-Tie South Orange Cinemas (1 SOPAC Way). Tickets are just $10 with advance purchase ($15 at the door, if available). Group discounts are available as well.

In keeping with North Jersey Pride’s “Pride with a Purpose” mission, proceeds from this event will go toward assembling backpacks for LGBTQ foster children, providing them with personal items such as a stuffed animal to cuddle, new pajamas, and school supplies to ease the transition into their foster home. We will be partnering with New Jersey’s Foster and Adoptive Family Services for this program.

We invite the entire community—LGBTQ and straight allies—to join us for this one-night-only blast-from-the-past cinematic experience!