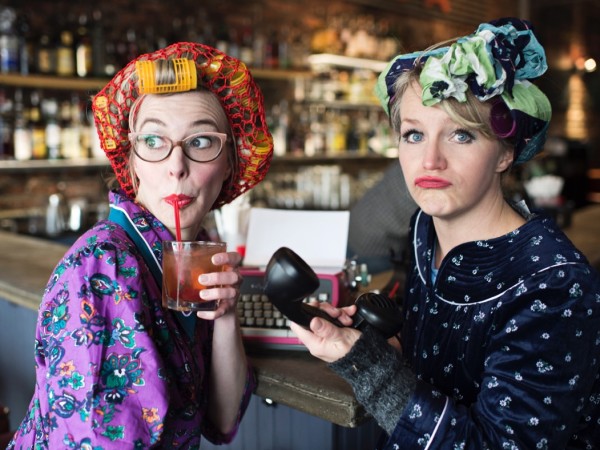 Talk shows have been around since the dawn of time. We all know the format: there’s a host, guests, and segments on current events. Yawn.

Studio B, a local non-profit arts organization known for producing cutting-edge events that feature local artists, is looking at the talk show phenomenon in a whole new way.

“Traditional talk shows are a vehicle for celebrities and endorsements, and they’ve always been ripe territory for satire,” says Studio B Honcho, Jenny Turner Hall “but we wondered what would happen if we stripped all of that away.”

Biscuits and Bourbon, an original theater piece written by Turner Hall and Marcy Thompson (Studio B’s other Honcho), places two unlikely hosts in an even unlikelier location, and asks the audience to go along for the ride.

“Like all of our shows, Biscuits and Bourbon is premise-driven. We have the most fun when we involve the audience in an unusual theatrical experience,” says Thompson. “This show is no different.”

The backdrop for this audio play (which will be recorded live and released as a podcast) is an all-you-can-eat breakfast buffet restaurant where grits, sausage, and entertainment are all on the menu. Turner Hall and Thompson will play central characters in their satirical, absurd, and often poignant take on Americana.

And just to up-end tradition even further, even though this show takes place at 10:00 a.m., the bar will be open.

“True to the title, we’ve got booze. And that should entice … ahem, allow our audience to feel like they’re part of the action,” says Thompson.

Turner Hall adds, “Why should Hoda and Kathie Lee have all the fun?”

Will there be biscuits? Well, you’ll be sitting on them. But there will be complimentary babysitting for wristband holders at Work & Play (details below).

Appearing as part of the SouthNext Festival, Biscuits and Bourbon also features pianist Dave Shields, who often backs up the Honchos at the Studio B Story Slam, and actor Charlie Pollock, who appeared last year in Studio B’s sold-out audio play, Milkwood.

A festival wristband is required for entry; if you want to make sure you have a seat reserved for Biscuits & Bourbon, hit the link below to buy your wristband, and to rsvp.

Studio B Presents: Biscuits and Bourbon

Saturday, June 18
10:00 am – 11:00 am
SOPAC Loft
Part of the South Next Festival
Must be 21 or over
All-Inclusive Wristband for South Next: https://bit.ly/southnext-studiob

Reservations for free childcare at Work and Play: https://www.signupgenius.com/go/10c0a44aaaf28a7f49-southnext 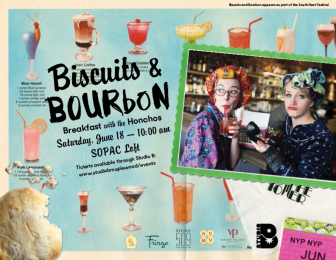