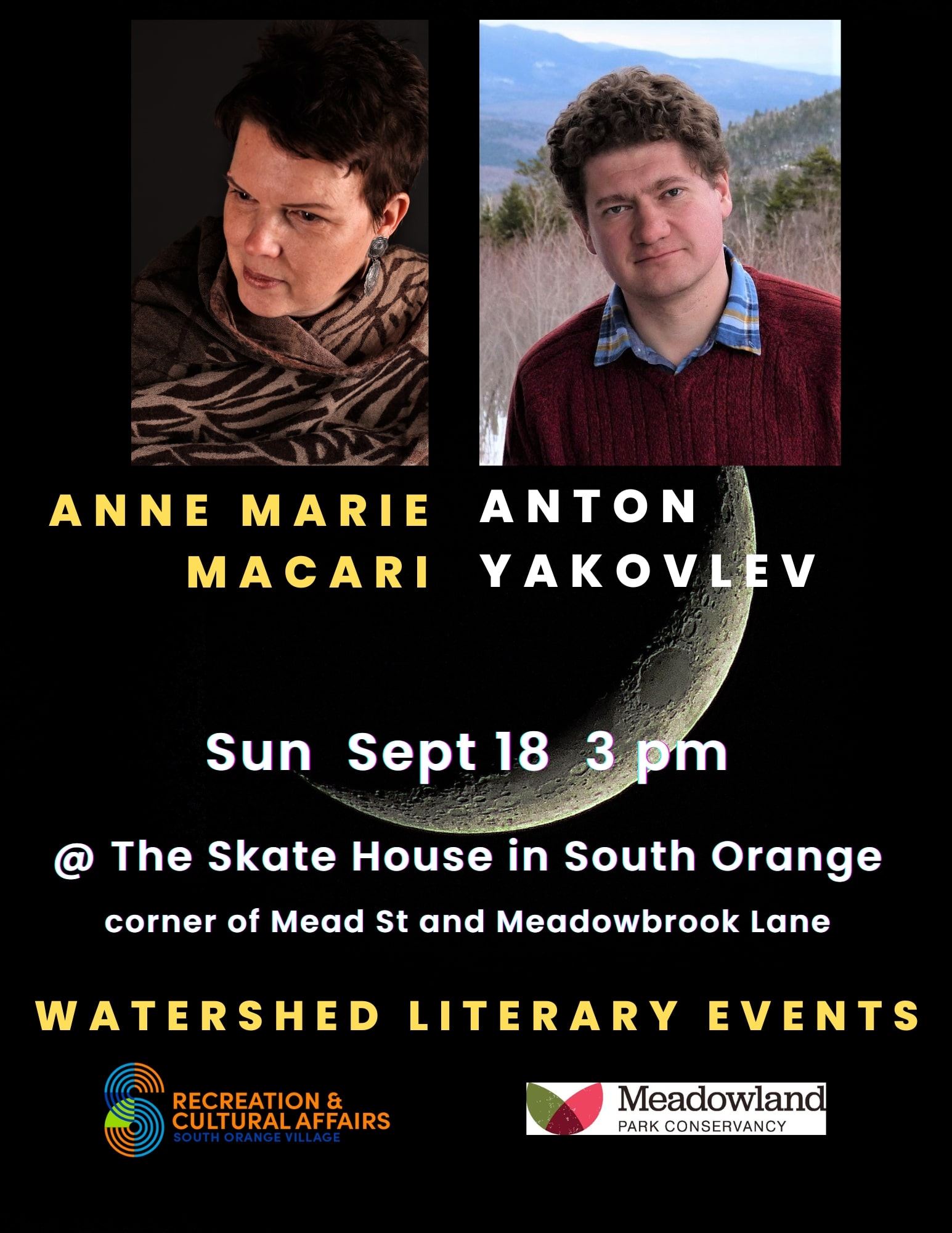 Watershed Literary Events, a spoken-word series sponsored by the Department of Recreation and Cultural Affairs in partnership with the Meadowland Park Conservancy in South Orange, will host two award-winning poets in-person at The Skate House on Sunday, September 18, at 3 pm. The featured poets are Anne Marie Macari and Anton Yakovlev. The event is free and open to the public.

Anne Marie Macari is the author of five collections of poems, including most recently Heaven Beneath (Persea, 2020) which Ross Gay describes as “a book of witness and gathering … mourning and wonder.” Other books include Red Deer (Persea, 2015) and Ivory Cradle (Copper Canyon Press, 2000), which was chosen by Robert Creeley for the APR/Honickman First Book Prize. She is also the co-editor of Lit from Inside: 40 Years of Poetry from Alice James Books. Her subject matter ranges from feminism, religion, and myth, to personal loss and the destruction of the planet.

Macari’s poems and essays have appeared in The American Poetry Review, The Cortland Review, The Iowa Review, and many other publications. She founded, and for many years directed, the Drew University low-residency MFA Program in Poetry. A long-time resident of Lambertville, NJ, she now resides in Manhattan.

Anton Yakovlev’s latest poetry chapbook is Chronos Dines Alone (SurVision Books, 2018), winner of the James Tate Prize. He is also the author of Ordinary Impalers (Kelsay Books, 2017) and two prior chapbooks. Born in Russia, he studied poetry and cinematography at Harvard; his poems have an intimate, cinematic feel, described by one reviewer as “almost flash fictions populated by characters who might have been sketched by Edward Hopper.” His poems have appeared in over 70 journals, including The New Yorker and The New Criterion.

Yakovlev co-hosts the Carmine Street Metrics reading series in Manhattan and the  Red Wheelbarrow series in Rutherford. A frequent translator of Russian, his latest bilingual volume is The Last Poet of the Village: Selected Poems by Sergei Yesenin (Sensitive Skin Books, 2019). He lives in Lyndhurst, NJ.

Watershed, which was founded in 2019, hosts four readings a year, featuring writers and poets with a connection to New Jersey.