For Maplewood’s Park Wood Diner, It’s All About Giving Back

Thursday was a big day at The Park Wood Diner on Springfield Avenue in Maplewood, so one would have forgiven owners Pete and Fifi Kikianis had they been feeling a bit proud.

After all, earlier that day the Star-Ledger’s/NJ.com’s Pete Genovese and his Munchmobile crew had visited the diner to chow down on a slew of menu items as part of a quest to find the Best Diner in the State — and the Park Wood is one of ten finalists. 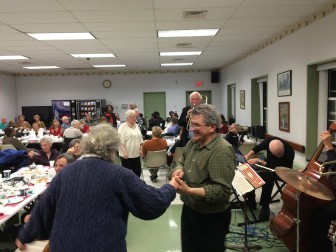 Indeed, when a reporter (and regular) came in that afternoon for a late lunch, Pete Kikianis quickly took out his cell phone to show photos of the “big event” — but it turned out what he and wife Fifi were so eager to boast about was the festive holiday party they had thrown for local senior citizens the night before.

“They had such a good time,” said Pete, who along with waitress Ona Ward described the eating, drinking, dancing and general merry-making that went on at the Irvington Avenue Senior Center in Maplewood. (Suffice it to say that Maplewood and South Orange seniors know how to party.)

This was the second year the Kikianises hosted the event, and it attracted more than 100 local senior citizens. Volunteers including restaurant staff, regular customers and Maplewood Township officials served a holiday meal as a five-piece band featuring Jim Buchanan and the Glenn Franke Big Band played tunes. 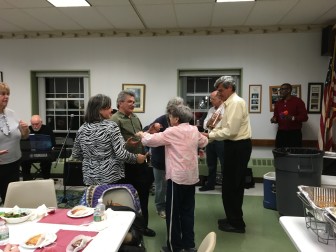 It’s all part of what the Kikianis family are known for: giving back. As a result, the Park Wood is a place where everyone feels welcome, from elegantly dressed ladies enjoying an after-church brunch, to groups of teens coming in post-game, to families, young couples, local workers on a lunch break and seniors having an early bird dinner.

The waitresses know many customers by name. In fact, on Thursday two of them serenaded Maplewood resident John McGrath, who was celebrating his 90th birthday with wife, Grace and daughter, Ellen. McGrath blew out the candle on a giant chocolate cupcake as the staff looked on, calling out, “Happy Birthday, Johnny!” 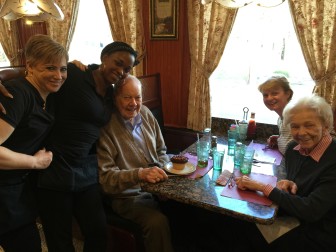 Amanda, Ona and the McGrath Family at the ParkWood Diner

Ellen McGrath said that recently, her family had been to a dinner at St. Joseph’s Church to honor local first responders. Pete and Fifi were asked to donate dessert, but in typical fashion decided to add on sandwiches and coffee.

“We in Maplewood know that Pete and Fifi have the best diner in all of New Jersey,” said Deputy Mayor Kathleen Leventhal. “Their cooking and serving a holiday dinner for local seniors also puts them in the most generous of Maplewood businesses!”

“It was a great event,” said Mayor Vic DeLuca. “Pete and Fifi were gracious hosts and Kathy and my wife, Janey, and I were part of the Park Wood team that served the dinner. We heard music, danced, sang Christmas tunes, and had a menorah lighting ceremony. It was truly a Maplewood inclusive holiday celebration.”

Back to that Munchmobile visit. Pete said as far as he could tell, Genovese and crew enjoyed what they ate. The winner will be announced at noon on December 17. Asked if he was nervous, Pete said a bit, but he is sanguine about whether Park Wood will win the ultimate title. “I made it this far,” he said. “I have all of Maplewood to thank for that. The town gives to me, and that’s why I give back.”

Remember, NJ.com will also crown a Readers’ Choice winner. Voting ends 11:59 p.m. Wednesday, Dec. 16, and you can vote once per day. Vote here.