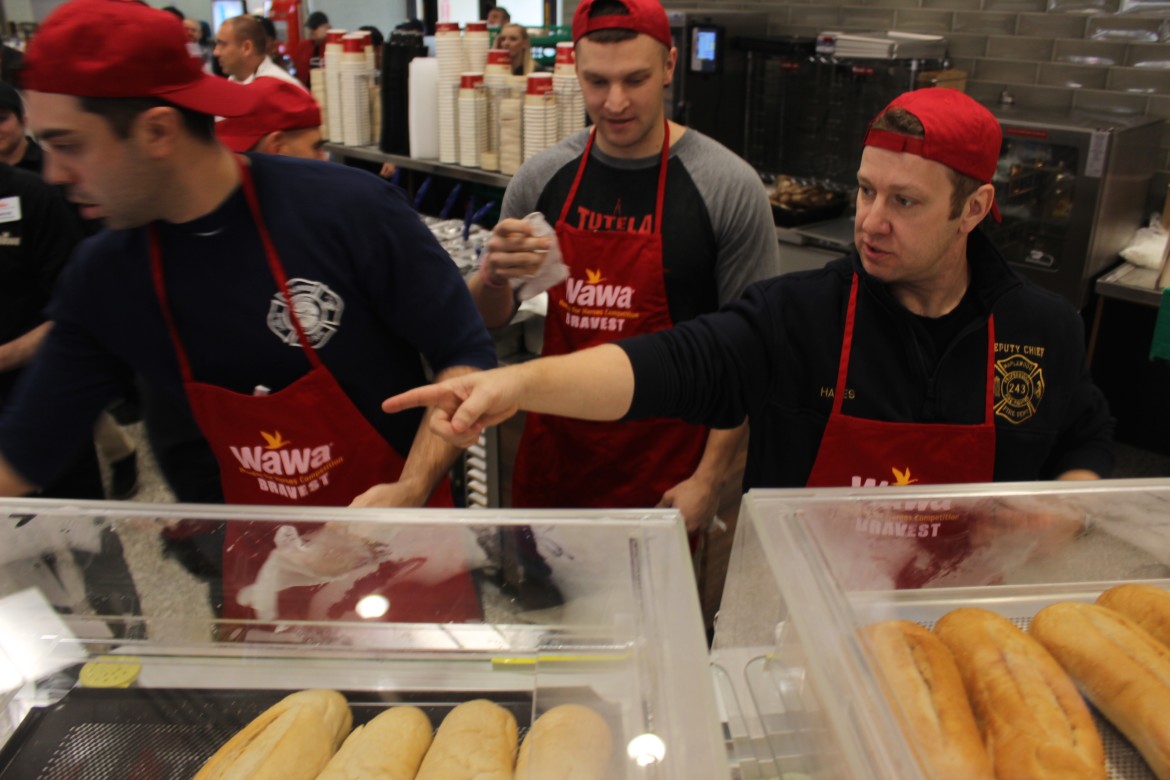 The Hoagies for Heroes Hoagie-making contest at the Dec. 16, 2016 grand opening of the Maplewood Wawa.

What if you had a party and everyone you invited showed up — and brought a few extra friends?

That was the embarrassment of riches experienced at today’s grand opening of the Maplewood Wawa — the first of the Pennsylvania-based chain to operate here in Essex County.

Locals crowded in for the free — and prize-winning — coffee, the French toast, the Sizzli breakfast sandwich, the TastyKakes, the donuts, the beverages, chips, candies, salads, yogurts, milk, the chili, the mac ‘n’ cheese — and, yes, the hoagies.

County Executive Joseph N. DiVincenzo was there. As was Assemblywoman Mila Jasey, Essex County Freeholder Wayne Richardson, Maplewood Mayor Victor DeLuca (and the other four members of the Maplewood Township Committee: India Larrier, Nancy Adams, Greg Lembrich and Ian Grodman). Also on hand: The director and chair of the Maplewood Chamber of Commerce, the director, assistant, chair and board members of the Springfield Avenue Partnership, Township Administrator Joseph Manning, local business owners, curious residents, and hungry and thirsty passers-by who thought they’d pop in for a coffee and instead got a party.

The second most excited participant was probably Vivi Charlap, a Columbia High School student who petitioned Wawa to let her be a part of the ceremony — to represent the youth of Maplewood at the event. Vivi was accompanied by her own TV production crew of fellow CHS students who will edit footage of the opening to air on CCN’s morning announcements tomorrow.

So who was the first most excited participant?

“They said it would be a cold day in Maplewood before we got a Wawa!” exclaimed Mayor DeLuca to the crowd, acknowledging the bitter weather that made for the briefest of ribbon cuttings. “This is a great, great day for Maplewood,” the Mayor added, noting that the east end of Springfield Avenue was experiencing unprecedented investment with the opening of the 5,000 sf Wawa and gas station, the construction of the 235-unit Avalon Bay project across Springfield and opening of the newly refurbished Maplewood Diner across Chancellor Avenue.

The event was capped by a Hoagies for Heroes hoagie-building contest between Maplewood’s Bravest and Maplewood’s Finest. The Fire Department and Police Department remarkably tied at exactly 38 hoagies each. Both played for a charity, necessitating that Wawa split the winnings. Wawa also donated $2,500 to the Rent Party Pantry.

More importantly, the departments would need to split the trophy: The Wally Goose-topped treasure (Wally is the Wawa mascot) will spend the first six months of 2017 at the Maplewood Fire Department and the second six months with the police.

And we buried the lede: The store will offer several grand opening specials including free coffee through December 18, any size Post Mix, Ice Coffee, Brewed Tea and Icee for $0.89, any Shorti hoagie variety for $2.99 and any milkshake for $1.99.