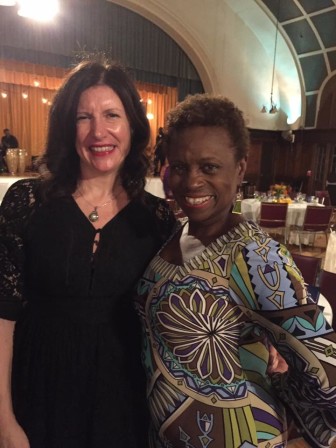 The South Orange/Maplewood Community Coalition on Race celebrated 20 years since its inception with a gala dinner on Saturday, October 22 at The Woodland in Maplewood honoring 20 years of leadership from its chairs and directors.

Since 1996, the Coalition has been working “to achieve and sustain the benefits of a thriving, racially integrated and truly inclusive community that serves as a model for the nation.”

The Coalition has worked to keep Maplewood and South Orange racially diverse and integrated through its programs including marketing efforts (such as house tours and advertising), interfaith programming, and workshops, forums and events such as Conversations on Race, the XRoots Festival, Coffeehouse Discussions and more.

“Many communities are diverse; few are integrated,” reads the Coalition’s vision statement. “Diversity may find people of different races and ethnicities living near each other, but integration finds them living with each other—interacting, forming friendships, participating fully in the community’s economic, political, civic, and cultural life.”