If you are a resident of South Orange or Maplewood, chances are you’ve recently received a flier in the mail, an email in your inbox, or a message on your voicemail from Phillip D. Murphy, Chair of New Way for New Jersey.

Murphy is coming to South Orange for a Town Hall meeting on Thursday, March 31, from 7 to 8:30 p.m. at the SOPAC Loft.

Many who follow state politics know that Murphy — along with NJ Senate President Stephen Sweeney, Middlesex County Assemblyman John Wisniewski and Jersey City Mayor Steven Fulop — are the top Democrats considering a run for governor in 2017.

So who is Murphy and what is “New Way for New Jersey”?

Murphy is a former Goldman Sachs executive who served as U.S. Ambassador to Germany for the Obama Administration from 2009 through 2013.

Politico reported last summer that New Way for New Jersey is a super PAC; Murphy aides filed paperwork with the Internal Revenue Service on July 10, 2015, to form the group, describing it as a “political organization established to promote a progressive middle-class agenda among Democratic voters in New Jersey and work with allies who share that vision.”

According to NJ.com, Murphy launched New Way for New Jersey to “mobilize the Democratic Party to promote middle-class issues like paid sick days and college affordability.” The launch came via a “statewide multi-million-dollar cable television ad campaign and a new website NewWay4NJ.com.”

Although Sweeney and Fulop also have super PACs, Politico reported that Murphy is the potential candidate with the “deepest pockets” since he “was at Goldman Sachs during its I.P.O. that netted top executives hundreds of millions of dollars.”

Wall Street wealth notwithstanding, Murphy positions himself as a champion of the middle class, saying he “grew up middle class” and that his vision for New Jersey is “growing our economy by growing our middle class.” Indeed, the lead quote on the NewWay4NJ.com website reads, “New Jersey families are struggling — and only a new way will turn things around. Here’s our vision: A more secure middle class, a growing middle class. It’s time for a new way.“

NewWay4NJ.com breaks down Murphy’s plan for growing the middle class as follows:

The plan  concludes, “Here’s how you grow New Jersey’s middle class and our economy at the same time: invest in our people, invest in our state, and put special interest politics out of business. It’s time for a New Way for New Jersey.”

Murphy will be at the South Orange Performing Arts Center Loft on Thursday, March 31, 2016, from 7 p.m. to 8:30 p.m. Find out more and/or RSVP via the event Facebook page. 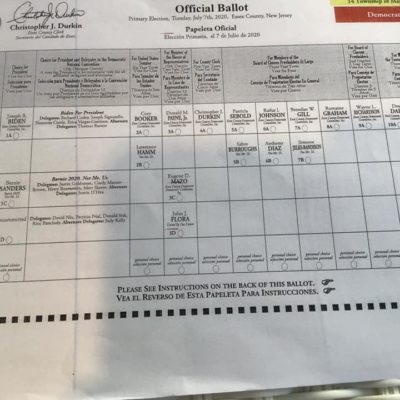