The parking lot of the West Orange Kmart was eerily quiet as I pulled up early on Monday morning. The sprawling former box store still sported a familiar red “K” on its front façade, dwarfed by two enormous banners announcing its new function as an Essex County COVID-19 vaccination site. Another banner across the front entrance carried the stern message, “By Appointment Only.” 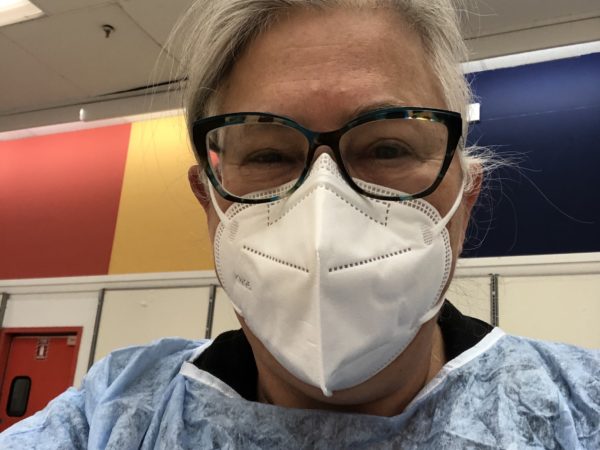 My footsteps echoed on the tile floor as I entered the cavernous space, now empty except for rows of orange-and-white crowd control barriers. A few ghostly figures in full PPE attire — hospital gowns, N-95 masks, face shields, and rubber gloves — waited at a folding table to check me in.

I had a sudden memory, from just over a year ago, of long cash register lines, tightly packed crowds, and incessant announcements blaring from the speaker system: “Attention, Kmart shoppers!” By contrast, Monday’s post-apocalyptic hush evoked a dystopian fantasy. 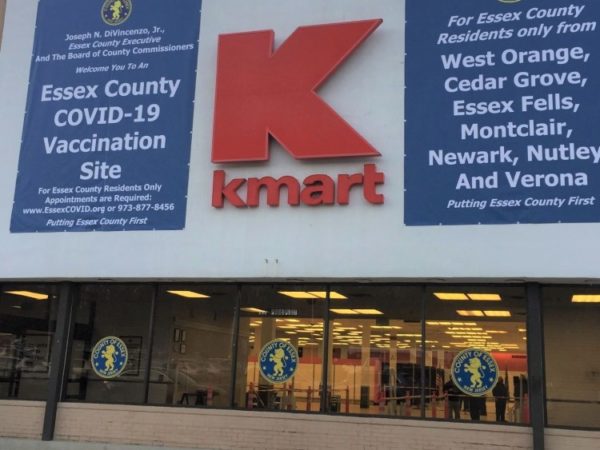 As it turns out, the shells of bankrupt big-box stores — like Kmart or the former Sears at the Livingston Mall — make excellent vaccine distribution centers, with vast parking lots, flexible floor layouts, and climate systems powerful enough to accommodate hundreds or thousands of guests. Our volunteer staff of perhaps 40 was scattered throughout the space, like breadcrumbs on a forest trail, to help vaccine recipients navigate the terrain.

Once I was checked in, a nurse gave me a package of disposable PPE and directed me to a waiting area behind black drop cloths, where I could suit up and help myself to coffee, water, and snacks. After 45 minutes of waiting, the volunteer manager took us on a tour of the facility, dropping people as she went: four near the cordoned-off areas where nurses provided the shots, four at registration, another six in the area where registered patients received their charts, and six more at spots along the way.

As non-medical volunteers, our job was to help in any way needed, from assisting elderly visitors with wheelchairs to pointing the way to the bathrooms (a row of portajohns outside the doors: best to avoid). I was assigned to the front door as a greeter — shades of Kmart — checking appointment confirmations and directing guests to the registration table. 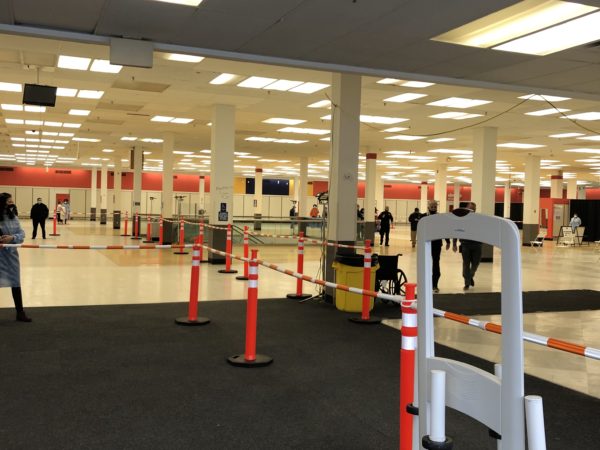 Over the next seven hours, I witnessed the full range of human emotions, from elation to fear, disappointment, and rage. A few examples:

I also picked up some information that may be helpful to others trying to schedule their appointments. Most importantly, you must sign up on the county site if you live in Essex County: https://essexcovid.org/ This system is the only one in current use, and if you aren’t pre-registered, there’s nothing anyone at the individual sites can do to help you.

Second, the phased approach described on the site is being strictly adhered to: first healthcare professionals and nursing home residents (largely complete); then police, firemen, and other first responders (opened this week); then seniors and immunocompromised patients; followed by the general public. Timing for each phase is dependent on vaccine delivery and announced through the governor’s office — no one on site knows when the next phase will open.

Third, all of the staff and volunteers I saw were hardworking, sympathetic to everyone they dealt with, efficient, and unfailingly kind. They, too, have spouses, friends, and ailing parents who have been unable to get the shot. They, too, are frustrated that the centers aren’t operating at peak capacity due to distribution issues. Try to resist the urge to vent your anger in their direction.

Fourth, if you are frustrated because you signed up to volunteer and weren’t chosen, be aware that there were thousands of applicants for a few hundred slots. At this point, only people with unlimited availability have been chosen to volunteer — it made the planning that much easier. As additional phases roll out, new volunteers will be contacted.

Finally, volunteering is satisfying in many respects, but it’s not without its risks. In the course of a typical day, I had close contact with between three and seven hundred individuals, some of whom were almost certainly infectious. Volunteers are classified as healthcare providers and eligible to receive the vaccine, but if there aren’t enough doses on a given day, you may have to return for yours later. Either way, the shot won’t do you much good during your time at the site.

That said, it was an undeniable thrill to receive my first dose of the Moderna vaccine at the end of my shift. There was applause, selfies, and — most of all — a sense that things were finally beginning to change.

It’s not a Kmart special, but I’ll take it.

How to volunteer: The volunteer application is available online at https://forms.gle/V4HsWAmk8LmaNErz7. Right now, Essex County centers are fully staffed, but that may change as new phases open.