Ives, a Maplewood resident, had opened the Maplewood Bike Shed at 1673 Springfield Avenue six months ago, an event celebrated with a ribbon cutting by Maplewood Mayor Frank McGehee on March 7.

As reported in March, Ives’s love of bikes and motorcycles began when he was ten and “began to rummage through people’s curbside junk on days when the Maplewood Department of Public Works told residents to put out their unwanted items. For him, the old bikes he found were not trash, but treasure.” 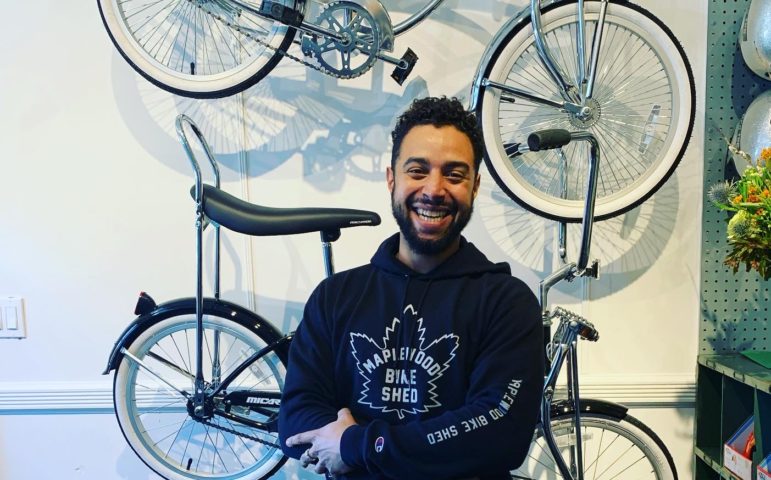 “Anything I could get my hands on, I would kind of tinker with it, take it apart, put it back together,” said Ives. “Then I started fixing other people’s bikes from my mobile van, and now I’ve got a shop that can support and house everything you need.”

From Alli Joseph’s March report, “A very resourceful, well-loved member of the community, Ives was clearly touched to see his grand opening … crowded with energized and happy people — including friends, family, and residents who heard about the opening from Maplewood Bike Shed’s social media pages. Greeting arriving guests with hugs and thanks, Ives seemed particularly pleased when young kids with BMX bikes came by to look through his stock, leaving their bikes on the sidewalk outside — reminding him, no doubt, of his younger self.”

From the South Orange Police Department:

On 9-4-20 at approximately 11:40 pm South Orange Police Officers responded to a 9-1-1 call of a single vehicle crash involving a motorcycle and its lone driver in the area of Elm Ct on South Orange Ave.

Upon arrival officers discovered an unresponsive male lying in the eastbound lanes of South Orange Ave in close proximity to the motorcycle, a 2005 Ducati and adjacent to the old main gate to Seton Hall University.

Officers as well as South Orange Rescue Squad members on scene performed life saving measures but unfortunately were unsuccessful as the victim, a 27 year old Maplewood resident was pronounced deceased at 12:15 am on 9-5-20 by University Hospital.

Preliminary investigation appears the victim had been traveling West on South Orange Ave before coming to a rest in the eastbound lanes. The crash is still actively being investigated at this time.

If any individual or individuals have any information regarding this incident please contact the South Orange Police Department’s Detective Bureau at (973)763-3000 x. 7788
Danny IvesMaplewood Bike ShedMotorcycle CrashSpringfield Avenue
0 comment
0
FacebookTwitterPinterestEmail