How the Search for One Little Dog Made Maplewood Shine 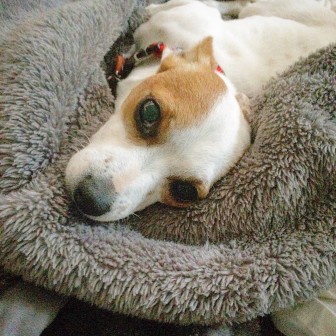 In the last few days, many local residents closely followed the heartbreaking story of Peanut the dog, who slipped his collar on December 30 on Pierson Road in Maplewood and whose body was found on Springfield Avenue in Union on January 2.

In the three days that Peanut was missing, hundreds — if not thousands — of locals shared information about Peanut’s escape and potential sightings in a frantic search to find him. Residents hit area neighborhoods posting fliers and searched street by street, block by block and park by park for the 9 lb. Chihuahua/Jack Russell mix who scampered about on just three legs.

When the tragic news of Peanut’s demise was announced, local residents posted words of condolence addressed to Peanut’s owners, the Delett/Hatch family.

“We are completely heartbroken,” Catherine Delett wrote on the Village Green News & Views Facebook group, Swap SOMa Lounge and other social media platforms. “Thank you to everyone who liked or shared posts, offered kind words and support, helped search or hang flyers, or anything else. There are too many people to list, but we are grateful to every single person in this community.”

Peanut was two years old, Delett told Village Green. He had been adopted in August 2015 from the Jersey Animal Coalition and belonged to Delett’s 12-year-old son Nate, who is a 7th grader at Maplewood Middle School. “Peanut was really Nate’s dog,” explained Delett. “Nate and Peanut were attached from the first day we brought Peanut home. He fed, walked, and trained Peanut, and slept with him every night.”

At Village Green, we thought we would simply relay the sad news via our social media platforms — hoping not to cause further pain for the family with an article about Peanut’s death. However, the Delett/Hatch family asked us to post this story in order to acknowledge and thank the greater Maplewood community.

“If there is one tiny ray of light that I can find in this situation it’s how this community came together to help,” Catherine Delett told Village Green. “I am amazed by and grateful to our community. The outpouring of support and assistance was incredible. And not just from friends and family, but from acquaintances and complete strangers, in Maplewood, South Orange, West Orange, Orange, Millburn, Union, and beyond.”

“I wish the outcome had been different,” Delett said. “But this little 9 lb, three-legged pup gave us all a reminder of how special this community we live in is. And that’s not a bad message for us to hold onto going into 2017.”

Jane Randel, a neighbor of the Delett/Hatch family, also was looking for that silver lining: “The outpouring of support, the boots on the ground looking, the people who did not even know the family well pitching in, even strangers aware and on the lookout, I found all of it so inspiring — especially with such uncertainty and divisiveness in the air. People were invested in what happened to this pup.”

In the end, Delett said she is trying to find perspective. “We are very sensitive to the fact that there are people dealing with much bigger tragedies. We loved Peanut beyond belief and we are devastated, but we recognize that people are dealing with larger things such as missing or sick family members, loss of home or income, etc.”

Nonetheless, said Randel, “While some might say Peanut was ‘just a dog,’ both his life and his untimely passing brought people together in a beautiful and hopeful way.”