In the aftermath of the death of George Floyd while in police custody in Minneapolis, Minnesota, the police chiefs of both South Orange and Maplewood issued strongly worded statements condemning the murder and supporting protesters. The governing bodies in both towns followed suit.

One criticism that arose was that some South Orange police officers wear thin blue line patches which have come to symbolize the “Blue Lives Matter” counter movement to Black Lives Matter. 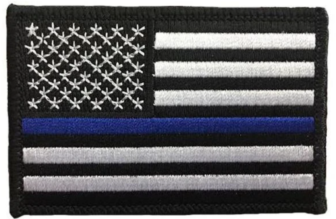 As Politico reports, “Those who fly the flag have said it stands for solidarity and professional pride within a dangerous, difficult profession and a solemn tribute to fallen police officers. But it has also been flown by white supremacists, appearing next to Confederate flags at the 2017 ‘Unite the Right’ rally in Charlottesville.”

In an interview with Village Green on June 9, Kroll said that the thin blue line flag would no longer be allowed on South Orange Police officers uniforms.

“My motto is community comes first,” said Kroll. “If this is something that the community is offended by, then I’m going to go ahead and have officers no longer wear that because I don’t believe in the counter movement.”

Kroll said that the thin blue line flag had “taken on a different meaning than what it was established for.”

“It’s offensive. It’s not the American flag but the blue line [that] represents something hurtful and offensive and because the community has to come first, I’m going to adjust the policy,” said Kroll, who stated that “none of my officers were wearing it to be offensive that they were knowledgeable about.”

Still, said Kroll, “Black Lives Matter and the community has to prevail.”

According to South Orange Village President Sheena Collum, Kroll was one of the first police chiefs in New Jersey to decry George Floyd’s death, writing in a May 30 letter to the community, “As Chief of the South Orange Police Department, I want you to know that like you, I watched the video footage of George Floyd being murdered at the hands of law enforcement. It was appalling, unnecessary, inhumane, tragic, and unacceptable. All four officers involved must be held accountable for both their actions and their inactions. Notably, not one officer intervened to protect George Floyd, a complete dereliction of their duties.”

Kroll continued, “I commit to you that in our community, we are listening and working every day to do better and involve those we serve in helping us become stronger, both as a police department and a community.”

The move comes amid widespread international and local protests and calls to rethink the role of police. At the June 8 South Orange Board of Trustees meeting, two community members — both Columbia High School students — asked for the redistribution of police funding to social services and other community funding.

Maplewood has also faced its challenges, even as Police Chief Jim DeVaul himself expressed his support of Black Lives Matter in a letter on June 3.

In Maplewood, many police officers, led by DeVaul, took a knee in a group photo on the steps of police headquarters. The action prompted some to question if the six officers who were disciplined in 2016 for a police brutality incident were among those kneeling. The names of the six officers, who were caught on video punching and kicking a Maplewood teenager who was handcuffed and face down, have never been released; none of the officers were fired. (Read comments by Maplewood Township Committee member and Public Safety Chair Greg Lembrich about this issue here.) 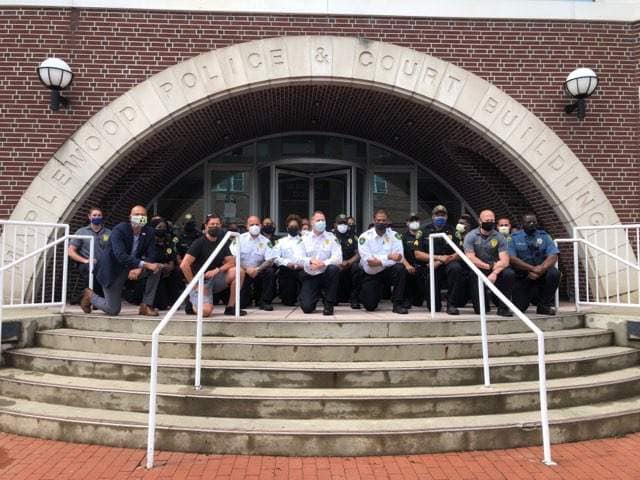 DeVaul addressed that incident and the ensuing mistrust in his June 3 letter, stating, “In full transparency, I must acknowledge this Police Department has dealt with complaints of excessive force and misconduct in the past. I recognized that this history would change the relationship between Police and the community for many years to come. As the new Police Chief, I assembled a team of qualified diverse officers to help change the culture in the Police Department.”

DeVaul added, “The public is outraged and rightfully so because they don’t trust or believe that anything will change.”

Both the South Orange and Maplewood police forces faced criticism in 2019 with the release of the Star-Ledger’s Force Report, prompting community meetings in both towns.

Meanwhile, Kroll is asking protest organizers to contact the police.

Regarding a die-in staged on South Orange Avenue earlier this month, Kroll said, “The biggest threat is vehicles with protesting and marching. The vehicle assault is the biggest threat. I’m concerned as the police chief that organizers are not reaching out to us and putting us in a difficult position to keep them safe.”

“Please reach out to us so we can keep you safe,” said Kroll.

“I want to support every protest.”

Editor’s note: Maplewood is holding a special summit on community accountability on June 19. South Orange leaders are promoting their monthly Community Police Collaborative meeting on June 11 as an opportunity to express concerns and ask questions of Chief Kroll.