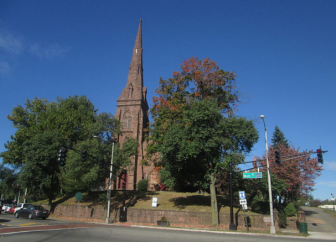 The former St. Mark’s Episcopal Church in West Orange, before its destruction by fire on Jan. 1, 2016. Photo credit: Wikipedia

Firefighters from Maplewood and South Orange along with others from Orange, East Orange and several other towns joined West Orange crews to fight the blaze that largely destroyed the historic building formerly known as Saint Mark’s Episcopal Church on Main Street in West Orange on New Year’s Day.

“At 5:22 a.m. on Jan. 1, Maplewood Engine 32 was requested to respond to West Orange Fire Headquarters on a cover assignment,” Maplewood Fire Chief Michael Dingelstedt said. “While en route, they were redirected to the fire scene at St. Mark’s Church. Upon arrival, they stretched a water supply line from a hydrant to West Orange Engine 3 and then were assigned to assist in exterior suppression efforts at the rear of the church. They remained on the scene until released by West Orange command at 10:00 a.m.” Maplewood Deputy Fire Chief Joseph Callaghan noted that there were no injuries to Maplewood firefighters.

South Orange Acting Fire Chief Daniel Sullivan reported that the South Orange Fire Department responded to this church fire at approximately 5 a.m. and “took up an exterior position and deployed a ‘master stream’ operation on this fully involved structure fire. Our engine company and four members returned to South Orange at approximately 11 a.m.” There were no injuries to any South Orange firefighters.

Although the Episcopal Diocese had closed St. Mark’s in 2004, the building was recently sold, and the current congregation renamed the building the Iglesia De Dios Pentecostal Church. Pix11 reported that the current congregation had failed to receive permission from the West Orange Historic Preservation Commission for HVAC, gas and electric improvements and had been fined by the town.

The main brownstone church was completed in 1828 with the steeple and other improvements by noted architect Richard Upjohn added in 1861. The church was one of the oldest structures in West Orange and predated the incorporation of the town. Maplewood Deputy Fire Chief Joseph Callaghan said that he grew up not far from the church. “Such a shame, it was a beautiful 200 year old church,” said Callaghan. “I had been in it several times.”

Read more about the fire and see video here.

Maplewood Police Officers, Firefighters to be Honored at...