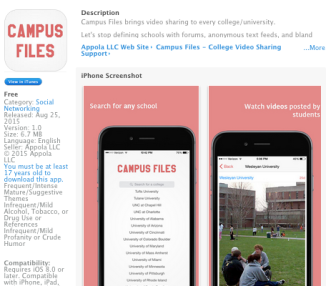 At least one of this year’s Columbia High School grads didn’t wait to earn his college degree before diving into the world of business and technology.

George Poulos, Class of 2015, is now a freshman at Wesleyan University. But over the course of his senior year, he developed an app that closely followed his own life experiences and interests.

“I made Campus Files to solve the problem of prospective student anxiety over choosing the right college,” wrote Poulos in an email to Village Green. “It launched on the App Store on August 25, getting over 250 downloads and ranking #516 for Free Social Networking apps on the US App Store!”

Using the app, enrolled students set their campus and post videos, and prospective students search for any college to watch the videos posted there. Check out the app here. The app is for iPhone only. 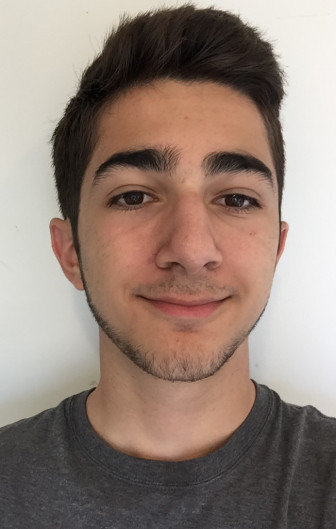 Although he grew up in Maplewood, Poulos attended South Mountain School in South Orange and South Orange Middle School. At Columbia High School, he was active in the the Achieve Tutor Program where he tutored elementary school kids at South Mountain School for three years. He was also in the Millennium Club, the Programming Club (briefly) and took tests for the Math League and Science League.

“Math was always my favorite subject, with English becoming a close second by the end of my junior year,” wrote Poulos. “My favorite two classes in my senior year were AP Calculus [taught by Dr. Scott Stornetta] and Gender Identities Across Literary Movements [taught by Lori Martling].”

Poulos said that Dr. Stornetta was helpful for bouncing ideas off of regarding the app development, as well as with the college selection process. “He wrote me a college recommendation letter,” said Poulos, and “we talked on occasion about programming and app development as well.”

Dr. Stornetta was effusive in his praise for Poulos in an email exchange with Village Green: “What a great student,” wrote Stornetta. “Someone who accepted responsibility for his own education. I haven’t seen the latest version of his app, but I have seen earlier versions.”

“If only we could communicate to all students what George has learned about education,” continued Stornetta. “Then we really would achieve the district’s goal of becoming the best performing diverse suburban school district in the country.”

Meanwhile Poulos is now beginning his education at Wesleyan. We asked, “What will you study in college?”

“I will almost certainly major in computer science,” wrote Poulos.