The following is a letter to the CHS community from Janet Bustrin, an English teacher and the advisor for the Parnassian Society:

The Parnassian Society, Columbia High School’s drama club, has been invited to perform at the American High School Theatre Festival (AHSTF) in Edinburgh, Scotland next summer – 2016 – and we are planning to go!!!

An informational meeting will be held Tuesday, June 23rd at 7 p.m. in the Black Box Theater. Interested students who love to perform or who are in stage crew and their parents/guardians are invited to attend.

Students who will attend Columbia High School during the 2015-2016 school year are eligible to participate.

In 1994, a group of high school and college drama professionals recognized the need for an international forum where outstanding high school performers could showcase their talent and gain valuable experience. The result was the creation of the American High School Theatre Festival (AHSTF), which takes place every summer in Edinburgh, Scotland. AHSTF celebrated its 20th anniversary in August 2014!

Schools winning the honor to represent North America in Edinburgh as part of AHSTF enjoy an exciting journey!

Upon arrival in London, students are treated to a guided panoramic tour of London, the bustling capital city of England. During their two days in London, they enjoy a West End Theatre performance, an optional workshop at Shakespeare’s Globe Theatre, and free time to visit famous sites such as Big Ben, St. Paul’s Cathedral, Buckingham Palace, and more.

On the third day, groups board a private, chartered train and take a scenic trip from London to Edinburgh, Scotland. Groups are greeted at the train station by the stirring sound of bagpipes before boarding coaches to take a guided tour of the majestic capital city of Edinburgh. The next ten days are filled with rehearsals, performance at official AHSTF/Fringe venues, shows, workshops, an excursion to the stunning Scottish highlands and historic Stirling Castle, the Royal Military Tattoo at Edinburgh Castle, and so much more. By the end of their stay, many students consider this beautiful, unique, and friendly city a true ‘home away from home’.

What’s next for our planning/participation?

At the meeting, more information about the festival, costs, logistics, and fund raising will be provided.

Remember: next Tuesday, June 23rd at 7 p.m. in the Black Box Theatre 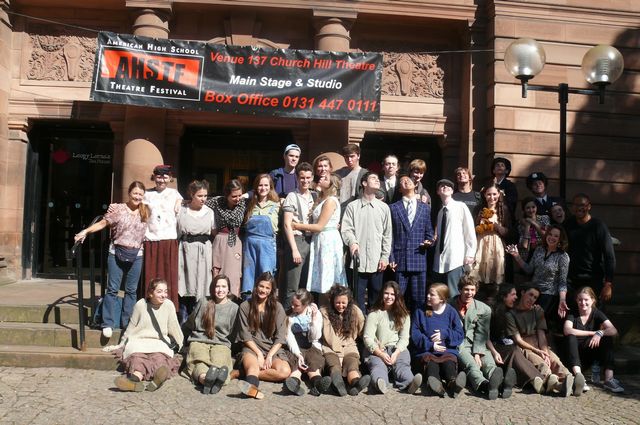 “Every day was magical,” said senior Cristina Tsanas. “We were surrounded by artists from all over the world. The hardest part was choosing which shows to go see.” The students performed Urinetown five times during Fringe and saw nearly 20 other performances, including Shakespeare plays, vocalists’ shows, original dramas, the world-renowned Edinburgh Military Tatoo, and comedy improv groups.

In addition to ten days of performing and touring historic Edinburgh, the students spent two days at Stratford-on-Avon, participating in an acting workshop at the Royal Shakespeare Theatre.

“The Fringe was the best two weeks of my life,” said junior Greg Archer. “ I can’t wait to go back!”