Two candidates — Annemarie Maini of South Orange and Chris Sabin of Maplewood — declared their candidacies for the Board of Education today through a joint press release (see below). They join fellow candidates Wayne Eastman, Board President, and Madhu Pai, First Vice President of the Board, both of whom have indicated their interest in running for re-election.

Incumbent Board member Jeff Bennett has announced that he will not seek re-election.

Three seats out of the nine-member South Orange-Maplewood Board of Education will be up for election this November 3. The terms for each seat are three years. Board members take office in January. The last day to file to run for Board of Education is Monday, July 27.

Read the press release from Maini and Sabin here: 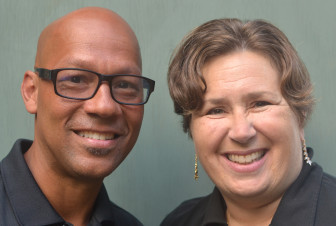 Annemarie Maini of South Orange and Chris Sabin of Maplewood today announced the launch of their joint campaign as candidates for two of the three available seats on the South Orange-Maplewood Board of Education, to be filled in this November’s General Election. The Board of Education consists of nine members, three of whom are elected each year for three-year terms.

For the past eight years, Annemarie Maini has owned and directed the education program of the highly respected South Orange Country Day preschool in South Orange (socds.com). She is immediate past co-president of the South Orange Middle School Home and School Association (2014-15) and served on the Board of YouthNet from 2010-14. Maini is active in a wide range of South Orange community activities, including service as South Orange 2015 PlayDay Volunteer Coordinator, as a South-by-South Orange volunteer this past June and as board member of the West Montrose Neighborhood Association from 2012-15. She also found time to serve as Team Mom for the U12/U14 Morris Rugby Club for many years.

Maini was employed by Chase Manhattan Bank from 1994-2000 and then by the merged JP Morgan Chase until 2005. She worked in a range of increasingly senior roles in the retail bank, eventually serving as a Vice President in charge of customer balance growth. Maini’s business expertise is focused on the design of quantitative models for use with large data sets to understand risk and predict market and consumer behavior.

Maini’s work at SUNY included a semester of student teaching middle school mathematics. At Syracuse, she served as a graduate teaching assistant and participated in the design and implementation of a cooperative group work approach for math instruction in Syracuse public high schools as part of a university-led research project.

Maini’s teaching experience includes three summers of the step-up algebra course for incoming Syracuse freshmen, supervision of undergraduates who were student teaching in Syracuse area schools, and one year as an instructor at Jefferson Community College in Watertown, NY, teaching Probability, Linear Algebra and Calculus.

Maini and her husband Harpal are the parents of two boys, a rising eighth grader and a rising tenth grader.

Chris Sabin was born in Brooklyn and moved to Maplewood with his family as a second grader. He is a 1983 graduate of Columbia High School. He has been active in a range of community sports activities as a volunteer parent, including lacrosse and football. He served as Team Commissioner for the South Orange-Maplewood Packers football team from 2009-13 and in a variety of roles for the Maplewood Lacrosse Club.

Sabin is an award-winning senior marketing and promotions executive with credits from a range of major Fortune 500 clients. One of Sabin’s key marketing specialties focuses on serious health and lifestyle issues, and his work has included major awareness campaigns related to sickle cell anemia, diabetes, asthma and the dangers of smoking for teenagers. His recent client base includes the NAACP, for whom he helped organize the NAACP Leadership Summit in 2011, 2012 and 2013, securing talent, panelists and corporate sponsors. He also does work for Marsan Consulting (marsanconsulting.net) and F2F | 660 Digital (https://f2f660.com). Past positions include serving as Program Director for the “Be Sickle Smart” campaign of Novartis from 2008-10, as Director of Marketing for TV Land/Nick@Nite from 2004-08 and as Director of Events & Promotions for UniWorld Group from 2001-04. One of his most significant credits is a year-long campaign in 2002-03 for the Harlem Educational Activities Fund (heaf.org). HEAF changes the lives of underserved young people beginning in middle school and continuing in college and beyond through a youth development approach that includes rigorous year-round academic enrichment, social and cultural exposure and constant individual attention.

Sabin graduated from the University of Maryland in 1987 with a BS in Finance and Marketing. He is the father of one daughter, a rising sixth grader, and two boys, a rising eighth grader and a rising tenth grader.

In declaring their candidacy, Maini and Sabin issued the following statement:

“We are excited to share with our many friends — especially fellow parents — that we’ve decided to throw our hats into the ring in this year’s school board election. We want to help make this a district of which we can all be consistently proud.

“We look forward to a hard and exhilarating campaign. Our goal is to meet thousands of people across the community in the next three and a half months. We are gratified that so many of our friends and neighbors have offered enthusiastic encouragement and pledged their active support throughout the campaign.

“Our school district has many accomplishments over the years and offers much to our children. At the same time, a review of our district’s strengths and weaknesses reveals many unmet challenges and shortcomings that loom much larger than they should.

“Many people we know are hopeful that the arrival of Dr. John Ramos in August as our new Superintendent will lead to addressing many of the concerns felt by so many of us. Having met him in April, we look forward to his arrival and believe he can help move the district in the right direction. At the same time, he is only one person and needs the active support and engagement of our Board of Education, to help him set priorities and understand our community. And he needs a Board whose members are continuously engaged with all segments of our parent community to give him feedback on what’s working and what’s not. We want to be part of that process and believe that we have the understanding, energy and experience to help make this a district where all parents have confidence that their children will be served well, whatever challenges arise in the K-12 journey of each.

“We share with other parents the vision of a district where all students are active and engaged members of the school community, where excellence is not just an aspiration but a reality for all students, where students’ needs are the first, middle and last things we think about when pondering every issue, where every teacher is enabled to become just like that one special teacher who each of us remembers from our own school days.

“While we intend to talk about vision and necessary long-term change during our campaign, our short-term, number one priority — if elected — will be to get the district back on track in all of its basic operations. The district needs to eliminate some of the conditions that give rise to a never-ending stream of angry parents at the “Public Speaks” portion of Board of Education meetings.

“We need to provide the necessary information to help parents navigate the system, with full transparency for all district decisions that affect students. To enable parents to advocate successfully for their children, we need to ensure that all phone calls and emails to district employees get a meaningful and timely response. We need immediate improvement in our special services evaluation, referral and intervention efforts. We need to ensure that student discipline measures from K-12 are consistent, fair and effective. The Board needs to end its sole reliance on snapshots of standardized test scores and instead review summaries of individual student progress based on multiple measures. That would enable us to tell whether district efforts are successful for each and every student, especially those who enter in the later grades or exit our district before graduation. Finally, the district needs to improve the middle school math placement process that has been the focus of so much controversy for nearly six years.

“We realize that the noblest goals for our school system are a dead letter unless we can fund and sustain them. In light of the ongoing tax stress we face as a community, we will push for heightened Board scrutiny of district finances throughout the year, but especially during the budget process, and more transparency for the entire community on where all the money goes. In the course of our campaign, we will discuss approaches that might produce substantial budget efficiencies and a proposed political strategy that would win our district’s rightful share of state aid under New Jersey’s school funding formula.

“There are many other specific issues that we intend to discuss in the course of our campaign, and we welcome input from all parts of the community. Stay tuned!”

Amplifying their joint statement, Sabin added that he is particularly concerned to see the district make more progress on closing the racial achievement gap: “As the parent of three children of color in district schools, I am particularly worried about the pattern of underachievement for too many of their peers. We know all kids are capable of work at the highest levels, given the right engagement, motivation and academic support. Our district must do better. That is part of what motivates my candidacy.”

For her part, Maini noted her experience as a pre-school educator for the last eight years, observing that “children arrive at pre-school full of energy, curiosity and limitless potential. We need to make sure we continually engage them, support them and nurture their curiosity into full bloom. I am concerned that in the rush to meet the never-ending stream of state and Federal mandates, we may have lost sight of our intention to become a community of learners where children work to their full potential throughout the entire K-12 experience.” With respect to Columbia High School, Maini expressed her concern that CHS seems to over-emphasize the need for students to take full charge of their own educational planning and coursework. “We certainly need to empower students to be fully independent as part of their preparation for college, but at the same time, we need to model for them what that looks like and establish a better safety net for those who may stumble. We need to see every teacher-student interaction as an opportunity to make a positive connection. For students who are disengaged, we need to explore every avenue for discovering and unleashing their latent enthusiasm. ”