Editor’s note: This article has been updated with quotes from the candidates. 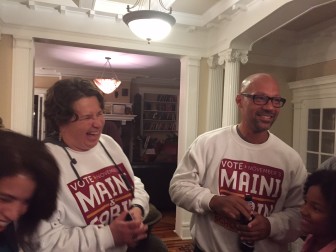 Annemarie Maini and Chris Sabin celebrate their win for two seats on the South Orange-Maplewood Board of Education.

Annemarie Maini, Chris Sabin and Madhu Pai all won seats on the South Orange – Maplewood Board of Education Tuesday.

There were nine candidates running for three seats on the nine-member BOE; the terms are for three years. Maini and Sabin ran together on a ticket. Pai was running for reelection on a slate with Margaret (Peggy) Freedson and incumbent (and current BOE President) Wayne Eastman.

“We are ready and prepared to serve our community, and for the real work to start,” said Annmarie Maini and Chris Sabin at their election night party at Maini’s home in South Orange.

When asked what his most memorable campaign moments were, Sabin responded, “There were lots of memorable moments from the campaign. Most recently, my 13-year-old son Quincy was at a coffee with me and there were very heavy, serious conversations about race, levels, and people being educated together. We left the party and he was really impressed. Quincy said, ‘That was really interesting, Dad.’ and I realized that adults and children are having the same conversations about race and equality but we are not communicating with each other. That needs to change. The children can really teach us a lot.”

“I was very moved by the people who remember my mother, who served on the school board,” added Sabin. “It was very emotional for me. One woman told me, ‘Your mother gave my daughter her diploma.’ My mom and dad were both very involved in the community and I consider it my responsibility to continue to serve our children.”

“I don’t see this as a victory,” said Maini. “The community is entrusting us to work with the board and with Dr. Ramos. We are on the cusp of a new energy and new willingness to work at every side of problems. We will not get everyone to agree on all solutions, but I hope that they will have faith that the process was transparent and comprehensive. I also believe people will now want to run for the board and serve the community, and not fight just for specific issues. This has been a very long haul, and we are grateful for all of our supporters as well as those in the community who voiced different opinions. This is what makes a democracy, and keeps people engaged towards positive change.”

“While I am grateful for the support of the community in my re-election, I am disappointed that we are losing the leadership and experience of Wayne Eastman, and the unique and necessary curriculum and teaching qualifications of Peggy Freedson on the Board of Education,” said Pai in an email to The Village Green. “I look forward to working with Dr. Ramos to ensure the successful implementation of the Access and Equity Policy.”

She continued, “Congratulations to Annemarie Maini and Chris Sabin, and many thanks to all the candidates who were willing to serve our community. A highly contested race such as the one we had is yet another reminder of what a passionate and engaged community we have!”

Wayne Eastman suffered a difficult loss, coming in just out of contention at fourth place, but was gracious in defeat, posting the following to his Facebook page: “CONGRATULATIONS to my running mate Madhu Pai, to Chris Sabin, and to Annemarie Maini! The SOMA schools will very much continue to be in good hands come January. This campaign has been the one that I’ve enjoyed by far the most of the three I’ve been in. The two biggest reasons for that are below—thank you very, very much, Madhu and Peggy! You are both wonderful!”

Eastman followed up with the following comment in an email, “It’s been a great run on the board.  As one of the poets of my era said, two out of three ain’t bad.” He continued, “My loss kind of reminds me of the passing of the elves at the end of The Lord of the Rings. We who came to SOMA in the early 1990s and hung out in the Newcomers Club with our young children are now moving off center stage.  It’s sad, but with loss there’s gain. Definitely in Madhu, and definitely also in Annemarie and Chris, I see hope, and a new generation that will be as great—and maybe greater—than we who came before them.”

Team SOMA 2015 — consisting of Marian Raab, Shannel Roberts and Elissa Malespina — offered this concession statement: “We want to thank all of our supporters and we are proud of the campaign we ran. We ran a campaign based in facts and wish the winners the best of luck. They have a lot of work ahead of them.”

Candidate Dorcas Lind sent an email statement to The Village Green on Wednesday: “I am pleased to have been part of the 2015 BOE election process. I feel confident that our communities are paying attention to what matters and more involved than ever before in ensuring the district meets the educational and enrichment needs of all of our children. I’m looking forward to seeing the new board members bring a new perspective and welcome participation in the summit to help drive the change we want to see.”