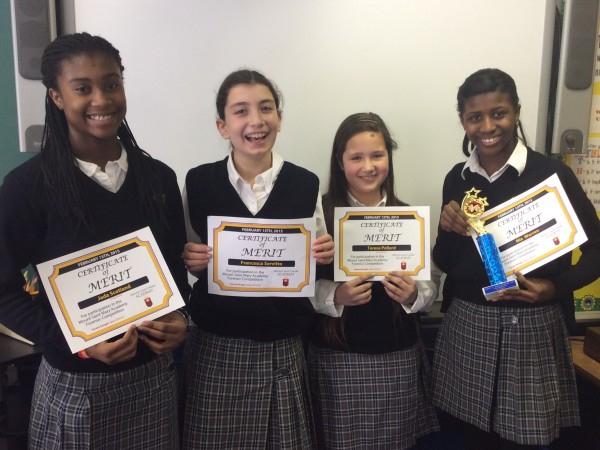 On February 11, students from Our Lady of Sorrows School in South Orange participated in the tenth annual Junior High Forensics Competition at Mt. St. Mary Academy in Watchung. The OLS team competed against eleven other schools from the counties of Essex, Union, Morris and Somerset. Representing OLS were sixth graders Teresa Pollard and Francesca Servitto, plus eighth graders Jada Scotland and Nia Warren.

There were three events that students could enter: Declamation, Oral Interpretation of Literature and Dramatic Pairs. For the third time in the past 5 years, an OLS student (Nia Warren) placed first in Declamation, winning a $1,000 scholarship to the Mount. She follows in the footsteps of Jada Warren and Devon Glenn.

OLS School has been a member of the Junior Forensics League for over twenty-five years. The OLS Forensics team is open to fifth, sixth, seventh, and eighth graders. Each year, the students compete in four meets, in addition to the invitationals. This year, our members have placed in the finals for two of the meets. One meet remains, as well as the Union Catholic Tournament in May. Last year, Christina Appiah, an OLS student, won in this meet and is looking forward to a repeat performance.