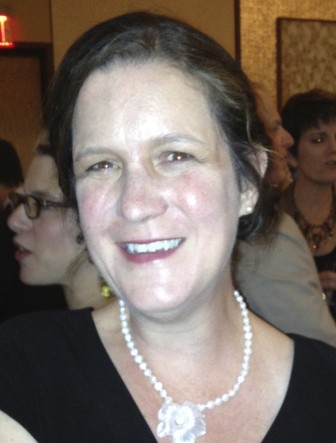 A funny thing happened to Lisa Hershey when she was studying acting with the legendary Uta Hagen.

“Through her I decided that I wanted to become a theater teacher,” said Hershey, now a professional theater educator and Maplewood mother of two.

Hershey recently recalled studying “very seriously” with Hagen during her 20s, while picking up extra work in mainstream films, acting in student films, running her own theater group, and dashing from audition to audition.

“I was inspired with how she gave critiques to other actors.”

Hershey was also inspired by Hallie Flanagan, director of the Federal Theatre Project, a part of the WPA that put out-of-work actors back to work during the Great Depression.

“She was a playwright and also a teacher. She was very interested in the idea of using drama to improve the lives of everyday people,” said Hershey of Flanagan, whom she studied as an undergraduate. “There was something more than wanting to be a performer, some grain of good.”

An NYU Education Theater Masters degree, years of theater education work and a Tony Honor later, Hershey is the education director of interACT theater at The Baird. This summer, Hershey is bringing that “grain of good” to our towns by running interACT Drama Camp, a two-week camp for children grades 2 through 6, from July 28 through August 8 at The Baird in South Orange.

“I’m so passionate about this camp. We wanted to do something very child-oriented where the kids take ownership. Literally they do everything. It’s written by them. It’s directed by them. They create in groups. They make their own sets, design their own costumes.”

Hershey said she was inspired by Lydia Johnson (of Lydia Johnson Dance in South Orange) who “does something similar with dance. I thought that would be great for theater,” said Hershey.

Working with Hershey will be two counselors: a college student from Vassar and a CHS student. “I’m trying to mentor them so they are leading some of this learning experience too.”

In her other life, Hershey is currently Program Coordinator at Open Doors, a program of the Theater Development Fund that brings NYC high school students into contact with Broadway and Off-Broadway theater productions. Open Doors was the recipient of a Tony Honor in 2012. “We were the first arts education organization to receive one,” reported Hershey.

Hershey said she is particularly excited about the second week of the camp this year. “The kids will make up their play from an improvisation.” Hershey said, “They’ll really be forming a nice community and learning artistic skills in the meantime.”

Hershey fully believes that theater is important to children even if they don’t want to pursue acting.

“Learning about the creative process is a really important life skill.”

There are still spaces for weeks 1 and 2 of interACT Drama Camp but they are filling up fast! Register here.