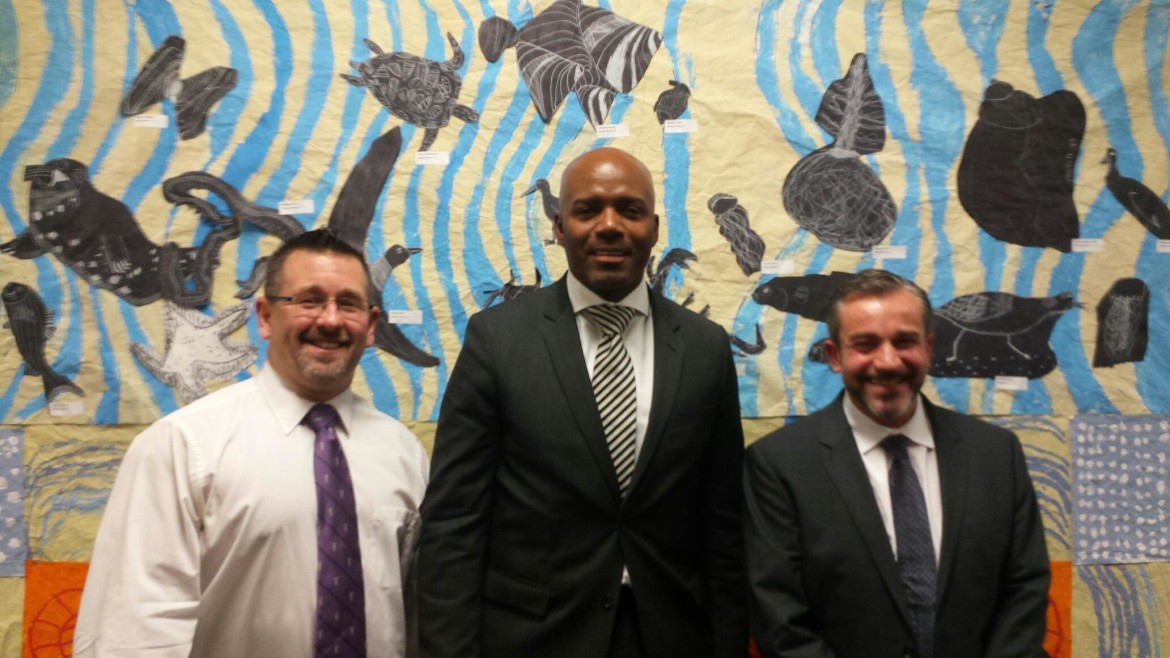 The Board of Education approved three new administrators at its October 19 meeting, including an assistant superintendent for administration to replace James Memoli, who is retiring. The appointments were made at the recommendation of Superintendent Dr. John Ramos, Sr.

Waldron and Robles were approved by 8-0 votes; Walston was approved by a 7-1 vote, with board member and 2nd Vice President Johanna Wright voting against. Walston was formerly principal of Warren Harding High School in Bridgeport, CT, where Ramos previously served as Superintendent.

Seemingly alluding to Wright’s vote, Ramos said, “I think I need to be very clear that although Mr. Walston is someone whose work I knew something of, he was not in anyway someone that I brought [with me]…as superintendents often do…He competed [for the South Orange – Maplewood position] like everyone else and he was unanimously accepted by the senior leadership team. I don’t want that idea hanging over his head, so I’m stating it publicly just to reinforce it.”

The Village Green has reached out to Wright for comment and will update this article.

Here are biographies of the three new administrators and their comments to the board.

Mr. Walston holds a BS in Black Studies with a minor in Secondary Education from the Herbert H. Lehman College in Bronx, New York and an MS in School Administration and Supervision from the College of New Rochelle, New Rochelle, New York. Mr. Walston served as Principal of Warren Harding High School in Bridgeport, Connecticut and of the Community Academy Public Charter School in Washington, D.C. Most recently he has been serving in a Central Office position as the Instructional Leadership Director for the Waterbury Public Schools where he has been supervising and supporting principals at 15 schools with 10,000 students.

Saying he was “deeply honored,” Walston noted the qualities he will bring to the position, including a results-driven and optimistic mindset, professionalism, effectiveness as a communicator and collaborator and his success in preparing students to be productive members of society. “I will do my very best to justify this recommendation,” Walston said.

Mr. Waldron holds a BA in Physical Education from Montclair State University and a MA in Administration and Supervision also from Montclair State University graduating with a 3.9 GPA. Mr. Waldron began teaching at Central High School in 2000, where he was also the head football and wrestling coach. He went on to become an Athletic Director and later Vice Principal of Arts High School in the Newark Public Schools. He has written curriculum for the Health and Physical Education programs and designed a weight training program for the district. Mr. Waldron was also the lead PARCC Technology coordinator providing workshops for teachers, administrators and parents. He was the lead on the Restorative Practices initiative since 2012. Mr. Waldron not only supervised and evaluated instructional staff but coordinated the efforts of instituting Common Core aligned lessons and assessments in the Physical Education and Health classrooms. He has an outstanding track record of raising expectations and standards for both staff and students to ensure the students experience social and academic success on a daily basis. Mr. Waldron has demonstrated competencies as a supervisor of both instructional and non-instructional staff, school finance, facilities management, and community partnerships. Most importantly, he has a solid background in developing a variety of learning environments that actively engage students.

“I am very excited to become part of the South Orange Maplewood School District,” said Waldron. “I am excited to bring my talents and passion for education and students to South Orange. It’s a wonderful town, and a great place to do a lot of exciting things.”

Dr. Robles holds a BA and MA in Second Language Acquisition with a minor in English Literature and Language from the University of Barcelona, Spain and a Ph.D. in Urban Education from the City University of New York, Graduate School and University Center. He has been a Spanish teacher in the South Orange and Maplewood School District since 2000. Dr. Robles continues to serve as an Adjunct Professor of Education and Spanish at Montclair State University and taught ESL for the South Orange and Maplewood Adult School. The title of his doctoral dissertation is: Youth Engagement: A Study of the Impact of Students’ Beliefs and Attitudes toward Civic Participation.

“I am really excited to begin this new path in my career,” said Robles. “I have worked in this community since 2000, since I came to America. I feel like I am part of this community. I look forward to bring our World Languages department to what it should be in the 21st century. I have a lot of ideas, and I’m really excited about this opportunity and want to thank all of you.”