The Maplewood-South Orange Board of Education paid tribute at its monthly meeting on Monday to board member Jeffrey Bennett, who after three years is stepping down.

First Vice President Madhu Pai, who was elected along with Bennett and outgoing President Wayne Eastman three years ago, spoke about Bennett’s impact as a board member. 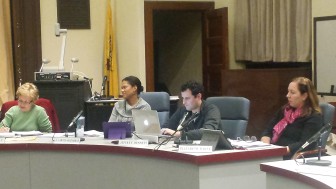 “Of all of us who have been on the Board in recent years, Jeff is the one most likely to have a major impact on education policy in New Jersey ten, twenty, and thirty years from now,” said Pai, who was also delivering remarks on behalf of Eastman, who was absent for personal reasons.

“Jeff’s diligence in gathering and evaluating data, and the work he had done to shed light on the state aid disparities will surely be missed on the Board of Education. Calling it “a great honor” to run and serve with him, Pai reassured Bennett the board would “carry on the great work that you started to keep the district healthy and strong.”

Bennett initially began his service with a focus on curriculum development, but soon found his passion lay in analyzing state aid. Thanking his wife, Megan, Bennett told the board and audience, “I hope I have done my part to broaden the agenda.”

In January, the board will welcome two new members, Annemarie Maini and Chris Sabin, who were elected along with Pai in November.

It was also the last Board of Education meeting for former Acting Superintendent and Asst. Superintendent Jim Memoli, who is retiring after 57 years in the district. Superintendent Dr. John Ramos praised Memoli and thanked him for his service, as the board and audience rose to give him a standing ovation.