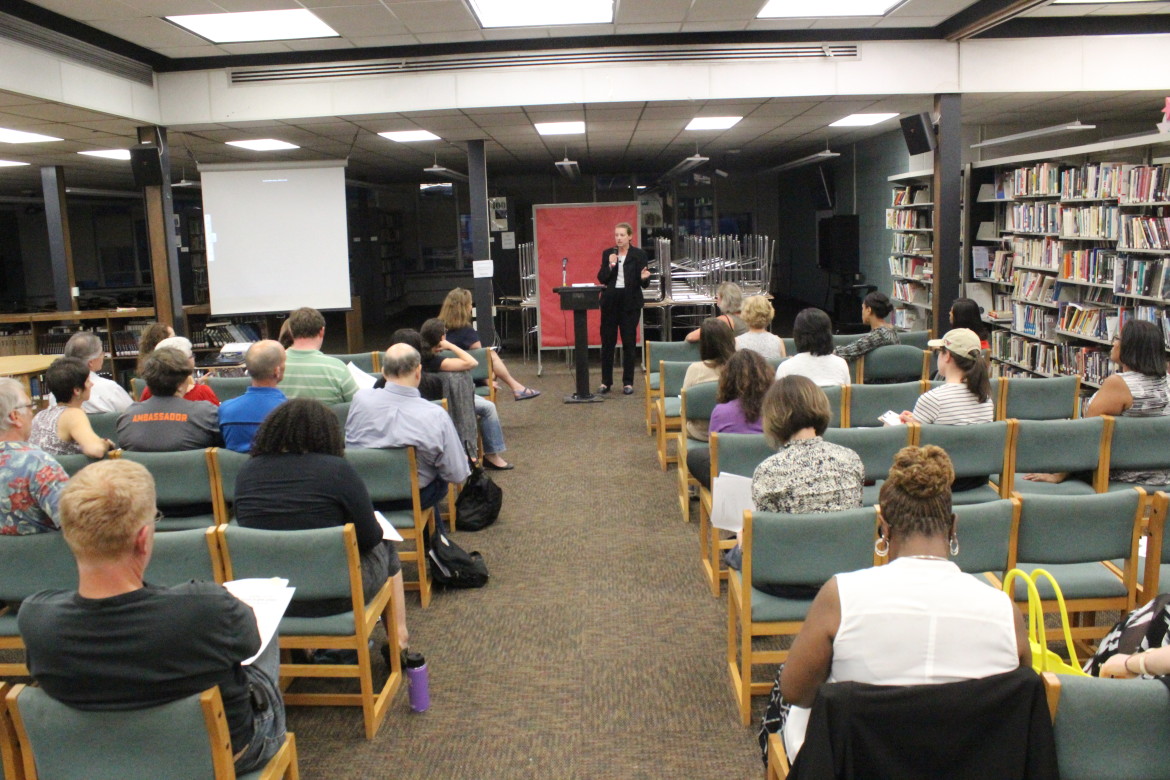 We’re mad as hell and we’re not gonna take it any more.

In short, that was the take-away Thursday night during an evening of complicated state aid school funding formula conversation at the Columbia High School Library that boiled down to one thing: South Orange-Maplewood is one of a number of New Jersey school districts not receiving its fair share of state funding.

To start off the conversation, Beth Daugherty, former President of the Board of Education, noted that the district is funded 94% from local tax levy and “a pathetic 3.4% from state aid.”

Daugherty reported that the district formerly received more aid but lost about 80% of its state funding during the fiscal crisis when then-new Gov. Chris Christie cut state aid drastically in fiscal year 2011 to help fill a critical funding gap in the state budget.

“Then it started to work it’s way back up, but we are only at about 67% of where it was before the cut. We haven’t come close to recovering where we were a long time ago,” said Daugherty.

Daugherty discussed how costs were increasing at greater than the 2% cap rate, and exhibited a chart projecting the district’s growing budget gap (see Daugherty’s full presentation below).

“When you lose nine teachers in the high school, that’s incredible,” said Daugherty, referring to cuts made to balance the 2016/17 budget. “We’re kind of in dire straits.”

Daugherty and Lindy Wilson of Assemblywoman Mila Jasey’s office discussed how the School Funding Reform Act formula, which had been briefly put in place in 2008, was abandoned during the financial crisis and that the formula used by the State Department of Education to determine state aid per district was now a mystery.

“Basically because the state doesn’t have the money to fully fund,” said Wilson, “they’ve been allowed to partially fund, but that has not been evenly done across the board.”

“There is a lot of places where they are just backing into the number that they need to fund schools,” she added.

“We understand that the State doesn’t have enough aid to fully fund the formula but if you are going to partially fund it, at least do it fairly. Some districts are getting over 100% of what they should get. We are severely under-aided,” said Daugherty.

“You can find out what it should be,” Wilson later said, “but you can’t actually see how they are arriving at the numbers/formula used. You can trace what you’re getting and what you should be getting, but you can’t find out how they are putting it together.”

But how can this be fixed?

Former Board of Education member Steve Latz said that the “real reason” for the underfunding was that “there is an uneasy truce in the state legislature between gangs and unfortunately our legislators don’t belong to any of the gangs. Our funding would savage someone.” Fixing the formula inequities, said Latz, “would take political will.” (Daugherty noted that the current Board of Ed does not endorse Latz’s viewpoint.)

Current South Orange-Maplewood Board of Education President Elizabeth Baker said, “The cuts and pain we are experiencing is very, very real. There’s a debate now statewide and everybody’s getting in the fray. Last year, Montclair got a bill through to get a million dollars — it didn’t get signed by the Governor, but it got that far.”

Baker argued that supporting a current bill sponsored by Jasey and Assemblyman John McKeon (see below) that would procure more than $2 million in aid for SOMSD for 2016-17 was also “a way to identify more districts that are not getting their fair share.”

However, Wilson noted that another bill, sponsored by Senate President Steve Sweeney (see below), had a greater chance of success and that it would set up a commission to study the problem.

“If this bill passes to form a commission, we have to get our message to that commission and advocate for a strategy to actually make a difference,” said Baker. “This is our opportunity for one shots as well as to start organizing for the long game.”

Baker added, “If we don’t advocate, we could even get less.”

Community members then started strategizing about how to reach out to other districts and advocacy organizations. Local residents Ronni Schwartz and Mary Barber said they would lead a grassroots effort to organize South Orange-Maplewood residents to advocate for school funding. (Email somafairschoolfunding@gmail.com.)

But Wilson, noting other state aid crises in transportation and pension funding, had a final warning: “Sometimes when you free up money it disappears to other places. Be careful what you wish for.”

To join the fight for more state aid for the South Orange-Maplewood School District, contact: somafairschoolfunding@gmail.com.