Although their numbers were limited by COVID-19 social distancing protocols, members of the South Orange Maplewood Education Association — better known as SOMEA — filled the meeting room at the school district’s Administration Building on November 15 to address the Board of Education, bringing an energy that was reminiscent of pre-pandemic meetings.

Even as other teachers needed to remain outside, those inside the meeting room made the most of their presence by cheering and banging pots as fellow union members addressed the BOE during public comments.

The teachers said they were there to protest their pay and treatment as contract negotiations have broken down with the district.

SOMEA did not counter the second offer, Joshua said, which led the Board to declare an impasse. “The Board’s Negotiations Committee is fully confident that it has negotiated in good faith and made fair and reasonable opening offers to the Association that provided a pathway for negotiation and settlement of the contract,” Joshua said.

SOMEA members, meanwhile, have shared salary step rates from Montclair, West Orange and Millburn school districts showing that SOMSD lags behind those districts, even as it experiences high rates of teacher attrition and is having difficulty attracting teachers of color.

On November 15, South Orange-Maplewood teachers complained of low wages, increased work responsibilities, the outsourcing of services, and a lack of respect from the BOE and administration — while struggling with the impacts of the COVID-19 pandemic.

Columbia High School history teacher Christie Thomas said, “For me the reality of our salary guide is quite grim … I’m on step 7 in our guide despite 11 years of experience. There is no incentive for us to stay. In fact, if I left the district and was rehired next year, I’d make $11,000 more.” Thomas said she worked two other jobs to make ends meet.

Claire Sinclair, a graduate of CHS whose sons also graduated from CHS, was one of three Tuscan teachers who read a letter they wrote together. (The full letter is attached below.) 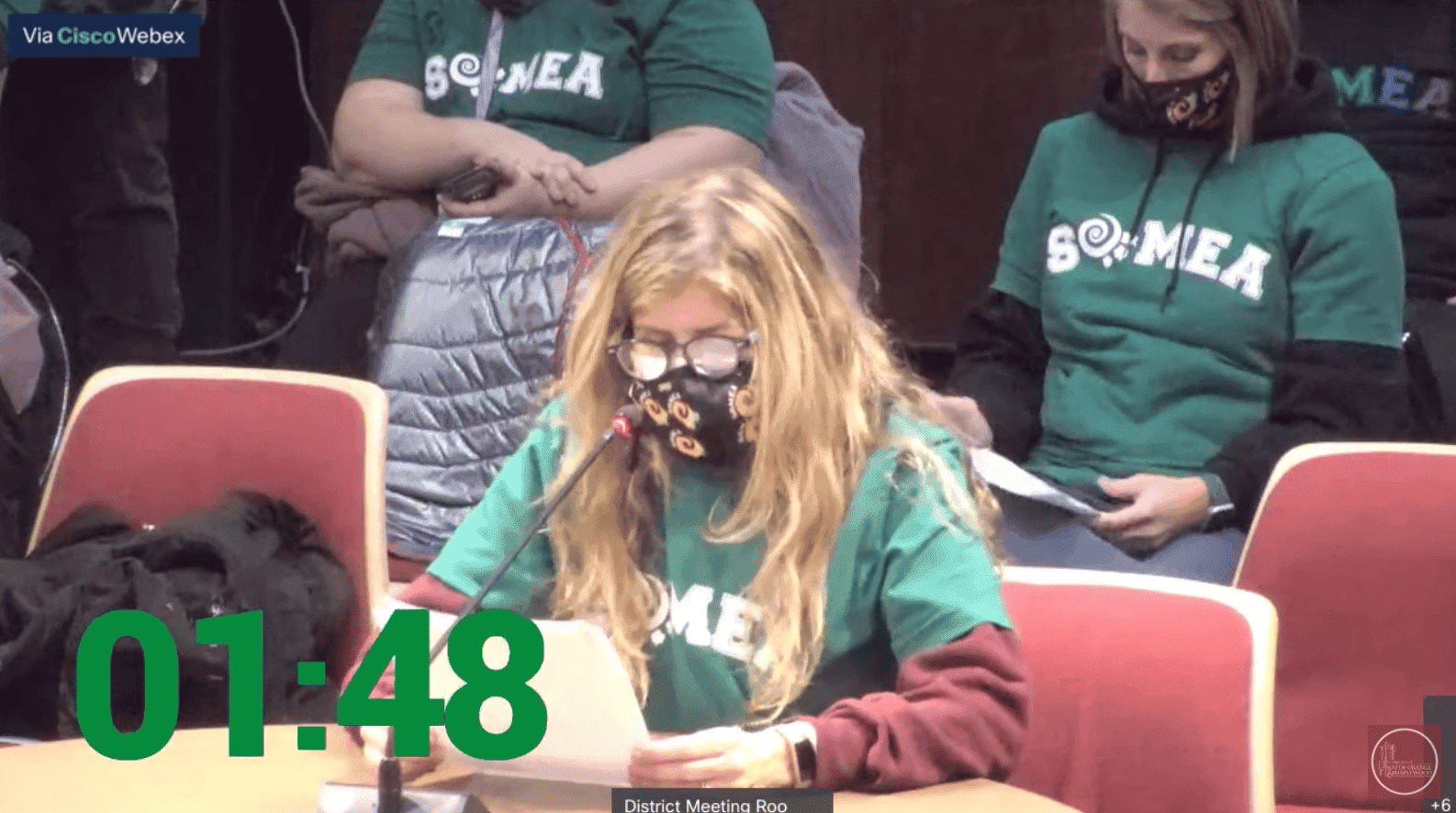 “Most importantly we are facing extreme challenges in supporting students who have been greatly impact by this pandemic,” read Sinclair, who has taught in the district for 15 years. “We see a much larger gap between our lowest and highest performing students.” She said students were struggling with focus, stamina and executive function skills, as well as the emotional and social impacts of missing in-person school for more than a year and a half.

“We teachers are completely exhausted and drained. We are constantly being reminded of self care by administrators, but seriously when are we supposed to practice this self care? And now most importantly we are seeing exactly how little our district has appreciated our sacrifices and how much our hard work and precious time are taken for granted.”

Tuscan teacher and district parent Jessica Wheeler read, “We started this year without a contract, but we were hopeful that negotiations would go smoothly – especially considering that the pandemic exposed just how important and irreplaceable educators are. Instead, negotiations broke down as soon as SOMEA asked for a pay raise.” She noted that Superintendent Dr. Ronald Taylor had received a $30,000 raise in September and a new contract [editor’s note: Taylor received a raise but performances bonuses were removed in his new contract].

Seth Boyden teacher Leah Van Doornick said she had struggled to live in the community with her rent comprising 52% of her gross income when she first started teaching. Van Doornik says that percentage has decreased as she now lives in a two-bedroom apartment with her four children. “It’s embarrassing but I’m putting myself out there,” said Van Doornik to the BOE. “Shame on you.” 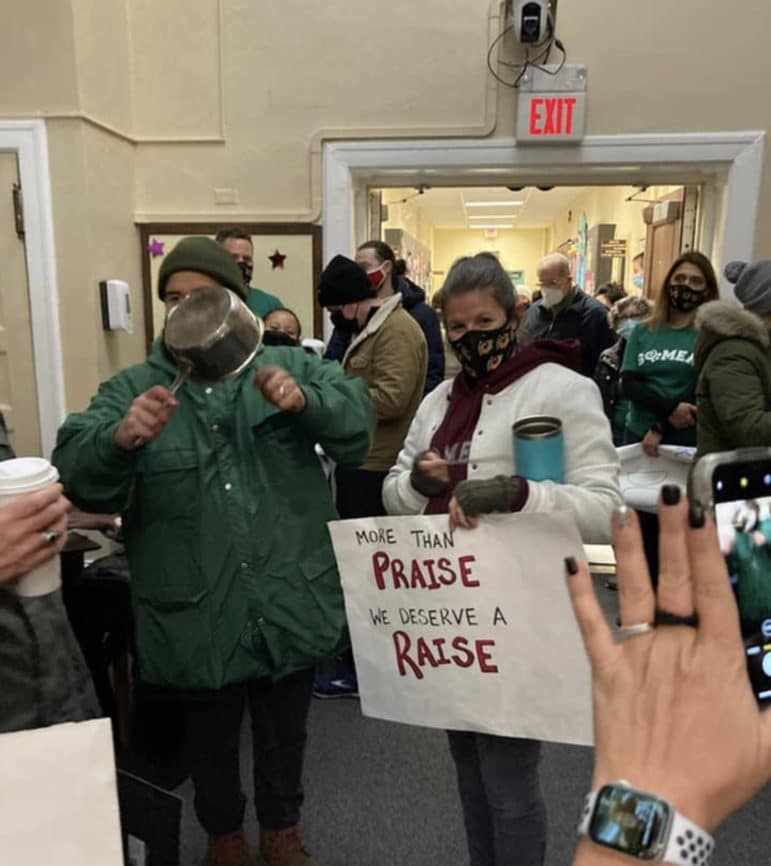 She also questioned the community’s values. “Are we really progressive?” asked Lopez. “Are we dividing, more and more, the people in power versus the workers?” Lopez noted that the district was budgeting money for re-turfing Underhill “and here’s a lady making $54,000.”

“We’ve giving you everything we have. Our mental health, our health. We’re here every day and you’re forgetting about that. … We do this because we love the job. We love the kids. And we give them our best,” said Lopez.

“But when people don’t care about your own family and your own children, you have to think twice. This is what you are putting us through. This is what we are suffering right now.”

Said Dr. Taylor, “I can’t respond to negotiations, but thank you for coming out this evening, Ms. Lopez.” 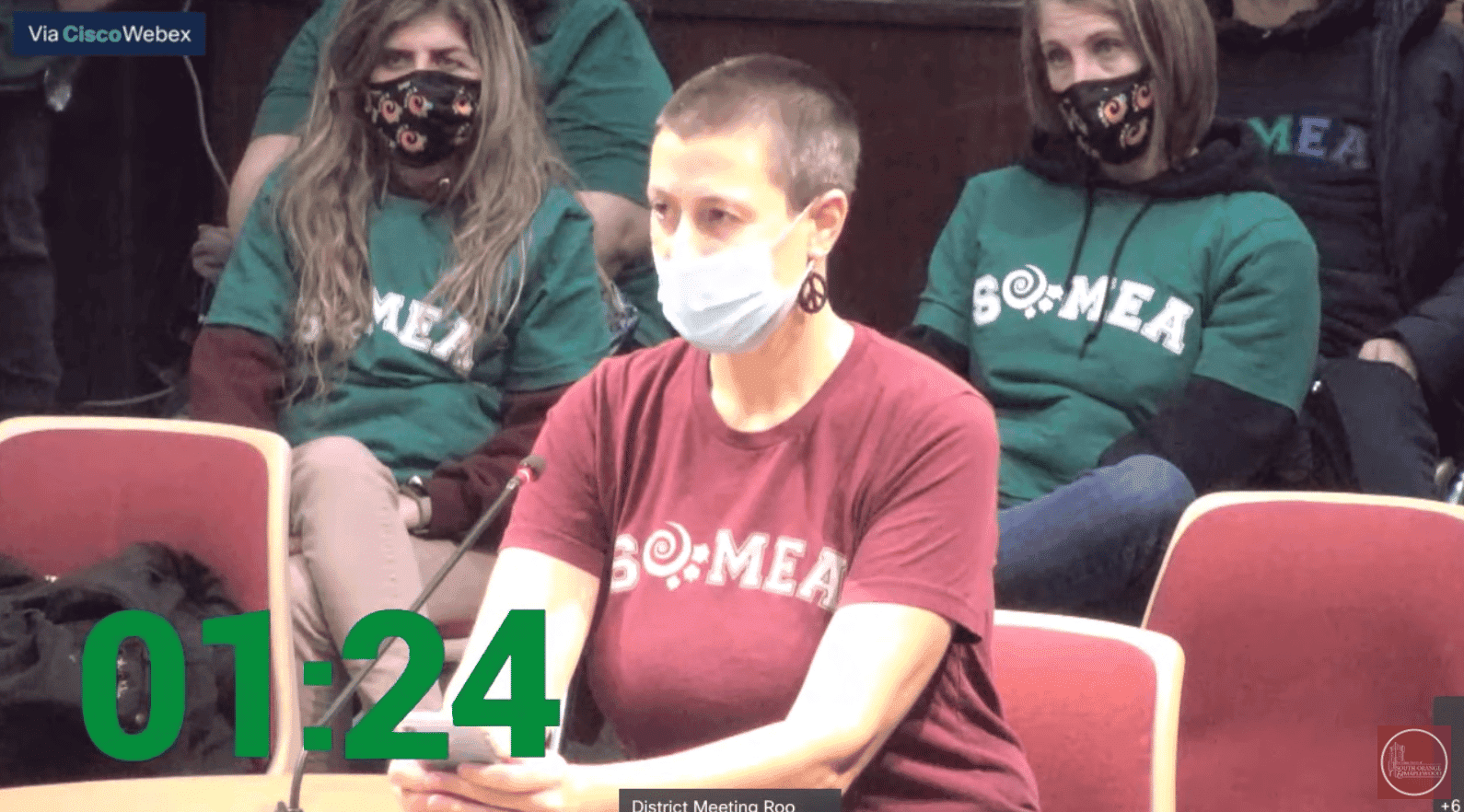