The Columbia High School Boys Soccer team entered their 2021 season ripped by the tragic loss of teammate Moussa Fofana, but the team honored Fofana’s memory by lifting their game to new heights.

Led by head coach Ryan Muirhead, the team finished with an 11-7 record, including winning the Super Essex Conference–Liberty Division championship with a 6-1 division record. As a result, the Cougars will be promoted to the SEC–American Division for next season — the top division in the conference — marking the second year in a row that CHS has been promoted within the conference. 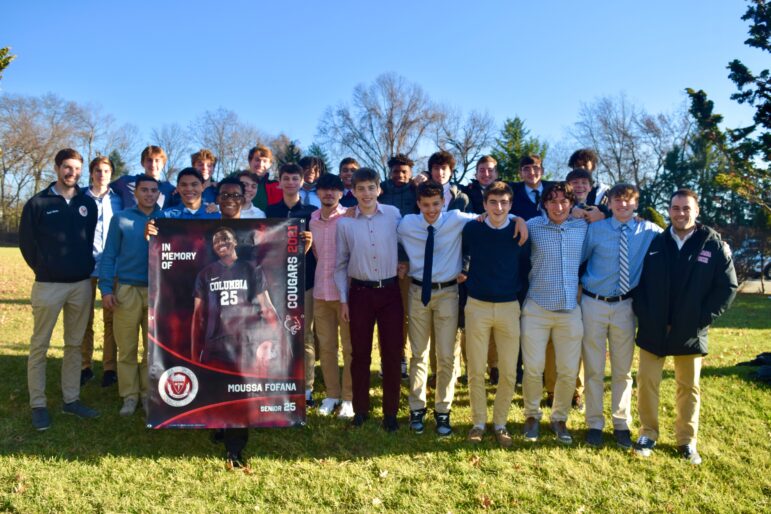 “We know there’s a lot of challenges ahead of us,” Muirhead told Village Green. “We’ve had a lot of success on the field the last two years. But we are hopeful because the bar has been set by the last two senior classes. And CHS has a strong soccer history which we are returning to.”

Muirhead said that the team owed a lot to administrators in the high school overcoming difficulties such as bus shortages, referee shortages, and damage to Ritzer Field — where the team practices — which needed to be shut down due to a pipe breaking in the aftermath of Tropical Storm Ida flooding. “[Acting Athletic Director] Mr. [Ken] Mullen did a great job getting us all on the field at Underhill as much as possible.”

The loss of Fofana hit the team hard, and the boys helped raise funds and attended vigils both to remember Fofana and aid in the arrest and prosecution of the man who murdered him. On Senior Night, the team invited Fofana’s mother Hawa to the field for a special memorial during which she was presented with a soccer ball signed by every player on the team.

The challenges have been hard, said Muirhead, but have generated an appreciation for “what they do have.”

“We have a really good group of kids,” said Muirhead. “They love soccer. They love playing together.”

Looking forward, Muirhead said, “We’re excited to see what the next couple of seasons hold.”