The Village Green May 18, 2015
0 FacebookTwitterPinterestEmail 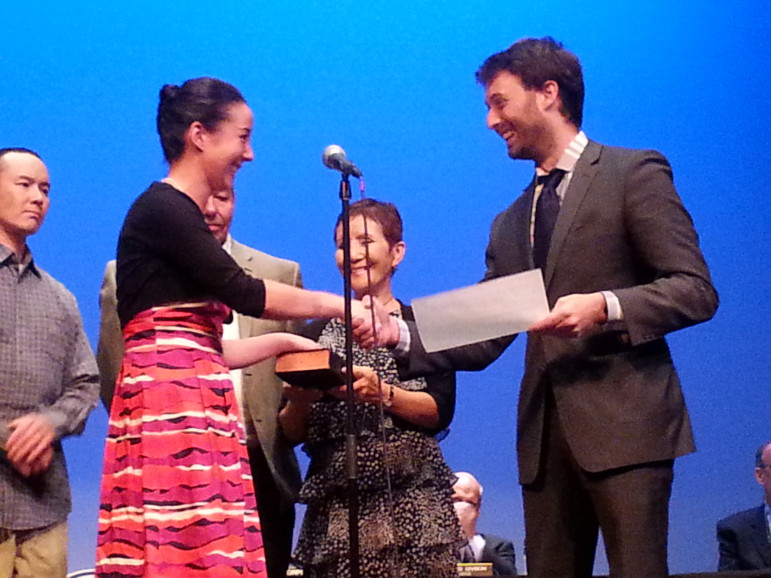 Before an enthusiastic audience of current and former elected officials, Village staff, family members, supporters and citizens, Sheena Collum made history Monday night as she was sworn in as South Orange’s 49th — and first female — Village President.

Incumbents Deborah Davis Ford, Howard Levison and Mark Rosner also were sworn in as members of the Board of Trustees at the ceremony at the South Orange Performing Arts Center (SOPAC). 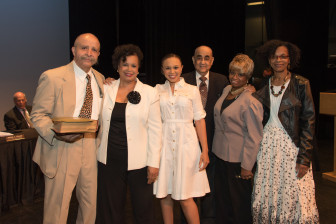 The historical significance of the election was a common theme of the evening. Collum joins 75 other female heads of municipalities — just 13% of the total — in New Jersey.

Collum was sworn in by outgoing VP Alex Torpey, after which the two exchanged an exuberant high-five and a hug. “It’s truly an honor beyond words; it’s really overwhelming,” said a beaming Collum.

Sitting down in the Village President’s seat for the first time, Collum glanced at her nameplate and quipped, “Yeah, that’s me!” to laughter and applause.

The new VP thanked the South Orange community, her supporters, Village staff, and her opponent Emily Hynes, whom she commended for “car[ing] about the issues.” 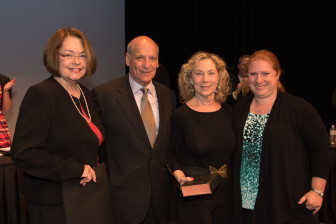 She also lauded her colleagues. “I’m really honored and privileged to serve with these folks. This was not a calculated marriage [of] convenience. It was caring about the people that I serve with.

“We want to do right by the people we serve…we always put the community first [and] I think more often that not our goals are the same, it’s just that we each have different ways to…achieve those goals.”

Collum said that despite being elected with 70 percent of the vote, her focus going forward was to engage those who didn’t vote for her (or didn’t vote at all) and “show them that their voice matters. That’s the mandate.” 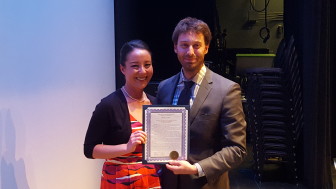 Her first act as Village President was to issue a proclamation to Torpey, for his leadership and service to the township. Noting that while having the first female leader of the town was significant, “It is minor compared to how much you have done for South Orange.

“South Orange is lucky to have you,” Torpey said. “When [democracy] works, it really works. This is a product of that.”

Davis Ford, sworn in by Essex County Clerk Christopher J. Durkin, said South Orange was going to become a model for other towns, noting that it was not only diverse but that its neighborhoods were fully integrated. She commended the work of South Orange Police in reducing crime, singling out Chief James Chelel, who was in the audience.

Levison, who was sworn in by Maplewood Deputy Mayor Kathleen Leventhal, mentioned accomplishments including upgrades to the township’s IT, investment infrastructure and establishing financial stability. Going forward, the board would focus more on shared services as well as lobbying the legislature for a change to the state’s school funding formula. 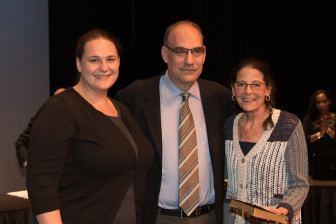 Sworn in by his daughter Shera, Rosner thanked his running mates, who he said had convinced him to run again despite some reservations he had. “I look forward to the next four years.”

Trustee Steve Schnall, who ran on a ticket with Collum two years ago, spoke for many when he commended her energy and passion. “You have no limits,” said Schnall. “I see nothing that can stop you from anything that you set your mind on.”

Collum singled out her family, who were in the audience, for teaching her self-sufficient, resiliency and — alluding to her Korean heritage and her mother’s penchant for sending her to school with kimchi for lunch — that “it’s OK to be a little different.” 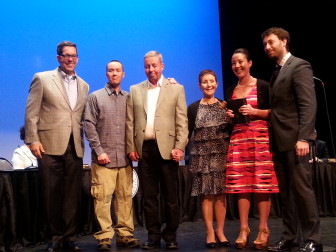 Collum with her family

She thanked her brother, a veteran of the US Army, for showing her what “real service” means, and her mother, for instilling in her the importance of volunteering. From her father, she got her competitive drive. She drolly recalled a Christmas photo with her father where she was wearing a T-shirt that read “No Fear” on the front, and on the back, “Second Place is the First Loser.”

“Thanks, Dad,” she said wryly, adding, “If you don’t have people in your life who love you so much that they push and push, then who do you have?”

Looking forward, Collum said the board would engage in a lot of strategic planning and would strive towards wanting the community to be the best. “What will define the next four years is partnerships,” she said, and South Orange’s successes and failures were linked with those of neighboring towns (including Maplewood) and the school district.

“In my administration I will value excitement,” she said. “I enjoy passionate people and new ideas.” Finally, she promised to “always be honest.”

Reached by The Village Green before the ceremony, three people who know Collum sent their comments.

“At Seton Hall, Sheena never stopped asking two basic questions; Why and Why not?,” said associate professor Matthew Hale, Ph.D., MPA (Public Administration) Program Chair for the Department of Political Science and Public Affairs. “It was very clear back then that she was not afraid to say what she thought and to fight for what she believed was right.”

“On behalf of the board and staff of the South Orange Village Center Alliance, I congratulate Sheena Collum on being sworn in…and wish her nothing but the very best of success,” said executive director Bob Zuckerman. Noting SOVCA’s close work with Collum on numerous initiatives such as the Business Code Review Task Force, he said, “We all look forward to an even greater partnership with Sheena and the entire Board of Trustees over the next four years. This is a great day for South Orange Village.”

“I know a big deal has been made of Sheena being the first woman to be Village President and as the father of three girls I think that’s great and know why that has made so many headlines; however, more importantly, Sheena is the most qualified, creative and talented person I have seen come into this position since we moved here,” said Doug Zacker, who chairs the Seton Village Committee. “That’s what has me really excited about the future of South Orange.”

“My heart and soul are lit up,” said Collum as she drew her speech to a close.