In an 8-0 vote last night, the Maplewood Planning Board approved a new site plan for Winchester Gardens, the retirement community located at Elmwood Avenue and Boyden Avenue.

Major additions to the complex had already been made in the 1990s.

The new plan allows for new additions as well as reconfigurations of existing buildings including the original circa-1920s Ward Homestead building designed by noted architect John Russell Pope, whose firm also designed the Jefferson Memorial in Washington, D.C. The grounds of Winchester Gardens — originally the Marcus L. Ward Home for Aged and Respectable Bachelors and Widowers — were designed by famed landscape architects The Olmstead Brothers.

Experts testifying on behalf of the applicant, Springpoint Management, said that Winchester Gardens needed to make the changes in order to remain competitive with other CCRCs (Continuing Care Retirement Communities) in the area.

The main component in remaining competitive would be the construction of a skilled nursing facility. Other plans included changes to existing buildings and two small additions to the Ward Homestead that would allow Springpoint to reconfigure common spaces and provide more and better amenities to residents. 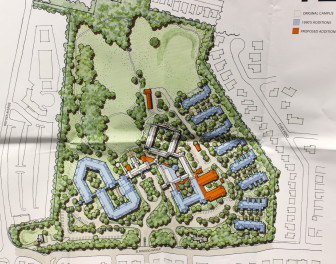 This site plan shows additions made in the 1990s in blue. New proposed additions are in orange.

However, in a letter copied to Planning Board Chair Tom Carlson, Virginia Kurshan of the Maplewood Historic Preservation Commission asked Springpoint Management “to re-visit the plans for the project” regarding proposed changes to Ward Homestead.

Kurshan wrote, “Regrettably, the plans we reviewed seemed to violate, if not destroy, some of the important elements of design that are unique to the original buildings. In particular, the proposed additions to the manor house remove the serenity of the beautifully defined main hallway and conference room by introducing asymmetrical open areas that have no central focal point. The proposed wings at the rear of the main building introduce design elements (windows, roof lines and materials) not at all sympathetic to those of the existing building.”

Kurshan acknowledged that the HPC had “no regulatory role over the Winchester Gardens buildings, as they are not officially designated as a local landmark.” (See Kurshan’s letter below.)

Springpoint’s architect for the project countered that the changes were sympathetic and necessary. David Danton of KDA Architects explained that not only was Springpoint “making state of the art amenities” but that the changes and additions to the Ward Homestead “enhanced the original.” Danton noted that Pope himself had created a one-story flat-roofed addition to the homestead building.

Danton said that the removal of one wall in the Great Hall would create “a gracious single room with two fireplaces” and that this “small” change would enable the room to function better. Danton acknowledged the “dichotomy” he was faced with in “making a museum or making [the space] function.”

A number of residents and their family members also spoke at the meeting expressing concerns about communications by the leadership of the facility to residents. (Mayor Vic DeLuca suggested to Winchester Gardens Executive Director Susan Lippy that the town could help facilitate a meeting with residents regarding these issues.)