(Editor’s note: this article has been updated with a correction to an exchange between John Harvey and the Township Committee. In addition, we’ve added video of the event, courtesy of Joy Yagid of SOMAtv.org.)

The Hilton Neighborhood Association sponsored the Maplewood Township Committee Candidates Forum on Thursday at the DeHart Community Center. Roughly 40 people turned out to hear the candidates face off on pertinent issues that face the town. 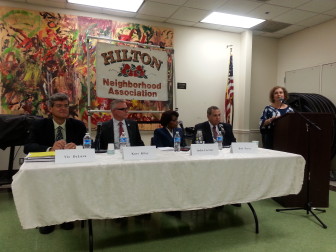 The four candidates — incumbents Vic DeLuca and India Larrier (each running as Democrats on separate tickets), Kurt Kiley (Independent) and Bob Perez (Republican) — are running for two seats, which have three-year terms.

The four gave prepared statements and responded to questions provided in advance.

The candidates found much common ground on the issues of seniors, litter and speed limits.

However there were deep divisions — largely between the incumbents and the other two candidates — on how the town should move ahead with the Post Office redevelopment and how to improve economic development on Springfield Avenue.

There appears to be a reduction in the amount of senior programs and trips that are sponsored by the Township. What specific steps would you take to expand Maplewood’s senior programs? Would you be in favor of creating a senior services coordinator position?

Kiley, who has addressed the issue of senior citizens in his campaign platform, said the situation should be reframed as how to achieve “lifelong living in Maplewood…There’s a place for [people] in Maplewood at all stages of life,” Kiley said.

DeLuca and Larrier said the town has a senior program supervisor, who is part of the Recreation department. DeLuca said the town also issued a monthly newsletter, Senior Spotlight, and ran a minibus to take seniors to the Livingston Mall and Shop Rite.

All the candidates agreed the town needs to do a better job of reaching out to seniors to let them know what is available. DeLuca said the town did a “bad job” of reaching residents of the Irvington Avenue senior citizen apartments, as well as residents of Winchester Gardens (which he said the TC was working on).

DeLuca and Larrier said the town needs to do better at reaching African-American seniors in town. Both also mentioned the town has built and is planning apartments that will appeal to seniors. 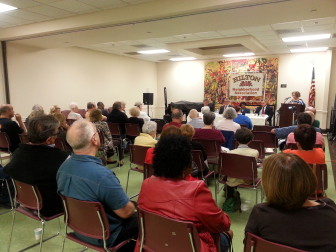 Now that the recent developer of the post office property is no longer involved, describe what you think is the best way to utilize this property.

DeLuca and Larrier firmly believe the town should stick with the original redevelopment plan. Larrier said the TC is meeting with three potential developers next month.

“The building needs to come down,” said DeLuca. He noted the proposed 25 apartments would help bring vitality and foot traffic to the northern end of Maplewood Village. He also said a new developer would likely reduce the amount of retail to 7,000 square feet and add some parking in the basement.

“There was no plan B,” said Perez bluntly. He said the town needs a “vigorous marketing plan” to attract potential businesses – he mentioned a Trader Joe’s, an office supply store or an urgicare center as possibilities.

“Our brand is our charm and character,” said Kiley, who has been outspoken about his disagreement with the TC on how the space should be developed. He said whatever is built should be smaller scale, mixed-use, with “lots of retail” and “maybe apartments.”

There are empty stores on Springfield Avenue. What actions would you take to attract more anchor stores?

DeLuca said the town used a consultant to recruit outside businesses to the town. He said officials were constantly reaching out to and negotiating with potential retailers — including a bank to replace the Santander, a “create-your-own-sushi-restaurant,” a craft brewery that might move to an industrial space on Rutgers, and a “major South Jersey retailer that wants to move to North Jersey.”

He cited the PSE&G development, a new owner who plans to reopen the former Maplewood Diner, and potential development in the area of Jacoby and Chancellor as steps that would be “game changers” for that part of Springfield Avenue.

“We are nimble, ready, proactive and out there,” DeLuca said.

“It doesn’t seem like there’s a vision,” said Kiley, who said he disagreed with DeLuca about how to develop Springfield Avenue. “I don’t see [it] as highway businesses, but as pedestrian friendly.” He said the town should start small, by attracting smaller businesses to build foot traffic, and then focus on attracting larger, anchor stores later. Kiley and Perez both cited their business experience as assets that would give them an edge on economic development issues.

“I disagree with Kurt regarding [attracting] smaller stores,” said Larrier. “Look at Walgreens,” which is now a thriving anchor. She said that the town’s economic development and business recruiting committees will be able to get the businesses the town needs.

Perez said the town needs to hire a full-time, dedicated marketing/PR person. He wondered if something like a Gap outlet store could be enticed to move to the PSE&G building.

What specific steps would you take to decrease that amount of litter all over town? How would you go about enforcing the anti-litter ordinance?

The four candidates agreed the existing litter ordinance should be better enforced. Perez said people should also take responsibility for not littering. Larrier and DeLuca said the town plans to get more of the Belly Buster trash compactors in town.

Often speed limits are not being observed and drivers are not stopping for pedestrians at crosswalks. What specific steps would you take to educate people and to enforce laws so that our streets are safer for pedestrians, cyclists, children playing and drivers?

Kiley said he is “passionate about pedestrian safety.” He said the town should conduct random speed traps and consider a program such as the one South Orange conducted with crosswalk stings. Referring to a recent neighborhood petition to improve traffic safety on Prospect Street, where residents said dangerous accidents and near-accidents had been occurring for years, Kiley said, “It shouldn’t take that long” to get the town to act.

Larrier agreed that the town should conduct more speed traps and stings, such as the recent one on Valley. Perez mentioned installing speed cameras on certain roads.

DeLuca noted the town had added speed humps on some roads, worked to get the speed limit on Valley reduced to 25 mph and added a crosswalk at Valley and Pierson. The town is also investigating installing push button lights on some Springfield Avenue intersections that would light up to alert drivers when someone is crossing.

An audience member asked the candidates if they believed the Township Committee — which has been comprised solely of Democrats for many years — should have people who are members of different political parties.

Perez said yes, and that diversity meant working with different kinds of people. Kiley said he thought the town’s problems were not partisan ones. He said the issue is that the Township Committee doesn’t deliberate on issues that really matter — such as the PSE&G and Post Office developments — in public.

DeLuca countered that the TC members represent a variety of thought. “We start with different opinions, and work together and compromise to come to a joint decision.” He said the TC has “good, hot discussions” and that he wanted every member’s views on the table.

Resident John Harvey said he had figured out that of 317 votes the current TC had taken, 301 had been unanimous decisions. He asked the incumbents if the TC members do discuss and debate issues before taking a vote, “Where do [disagreements] happen in public, a la the Sunshine Laws?” DeLuca said the TC follows both the Sunshine Laws and the Open Public Meetings Act.

“That’s an incredible number,” said Kiley. “What are the other members contributing if all the votes are unanimous?”

Larrier said it was not a bad thing that the TC took time to deliberate and debate and then often came to the same conclusion. “I don’t always agree with Vic and I’m proud of that.”

Perez said that power should not be concentrated in the hand of a few, because “mischief happens.” He said it was easy to fall into a trap of arrogance when “nothing will make you lose your office” and “you are above it all.”

In concluding statements, Perez surprised the audience by saying he agreed with many of Kiley’s positions, and asking people to cast votes for both of them. He said it’s time for a “fresh look” in Maplewood.

Kiley thanked Perez for his “endorsement.” He said running for TC had been the most growing experience he had ever had. “I can’t express enough how great this town is,” he said, noting a “new energy” in Maplewood. “Nothing can hold us back.”

Larrier said she had much more to contribute. DeLuca called the job “a privilege and an honor” and said he wanted to continue to work to make Maplewood the best it could be.

He mentioned an encounter with Hillary Clinton in an elevator in Denver, where he introduced himself as the Mayor of Maplewood. “I know Maplewood!” Clinton said.

Kiley noted that he had met the former secretary of state as well, and introduced himself as a Maplewood resident.