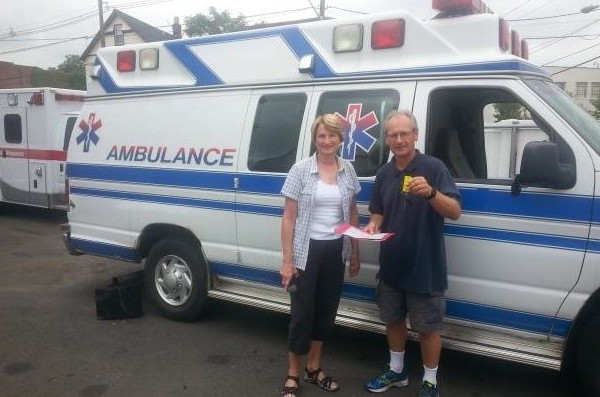 Morrow Memorial Methodist Church in Maplewood needs your help to fight a disease thousands of miles away.

The church is part of a larger effort by the United Methodist Church to aid Sierra Leone with medical supplies. A recent visit by Bishop John Yambasu to Morrow and Maplewood revealed that there was a great need for ambulances and medical equipment in Sierra Leone following the outbreak of the Ebola virus.

In response, Morrow’s Outreach Committee located a Ford 6.0 Diesel ambulance in good condition for $8,500.  The ambulance is being shipped in a container and stuffed with much-needed medical safety equipment.

Morrow has raised the funds to cover the projected costs.

“We’ve actually just completed it and I just took the shipping materials to the depot in Pennsylvania where it is going to be loaded with protective medical supplies such as ebola suits, gloves and masks,” said Tim Roebuck of the Outreach Committee. The ambulance and supplies will be loaded into a container going to Freetown, leaving in a couple of weeks.

“We think it will take about three weeks to get to its destination,” said Roebuck, who works in the travel business himself planning private tours to places like East Africa, Europe and Egypt.

In fact, Roebuck was in Sierra Leone last year with Morrow, where the Church has been working for some time sending educational supplies and the like.

However, said Roebuck, two months ago Morrow received an appeal from hospitals run by the church to help get people out of villages who are suspected Ebola patients in order to isolate them.

“Vehicles are in major short supply,” said Roebuck. “If you put people in a taxi, the next person gets in….” Roebuck said that using taxis to get to the hospital has been identified as one of the major points of contagion.

“You can clean out an ambulance and hose it down.”

Although the ambulance is purchased and ready to ship, the need for more aid continues.

“The real problem is that even if the Ebola outbreak is solved tomorrow, there is the economic impact. It’s going to lead to a real decline in the economy and they are on a tightrope already.”

Roebuck said he was just talking to the staff at Christian Relief Services; they are now working to pull together seeds and a tractor for shipping.

To support this effort, or learn more about other ministries in Sierra Leone, contact the Morrow Memorial Methodist Church office at: opendoors@morrowchurch.org.