This essay was adapted from an entry on A Project for Kindness, a daily blog by life-long Maplewoodian Claire Sinclair. Sinclair writes that she was looking to post daily about “inspirational things … kindness, good deeds, inspirational people.” Read more of Sinclair’s blogs here. 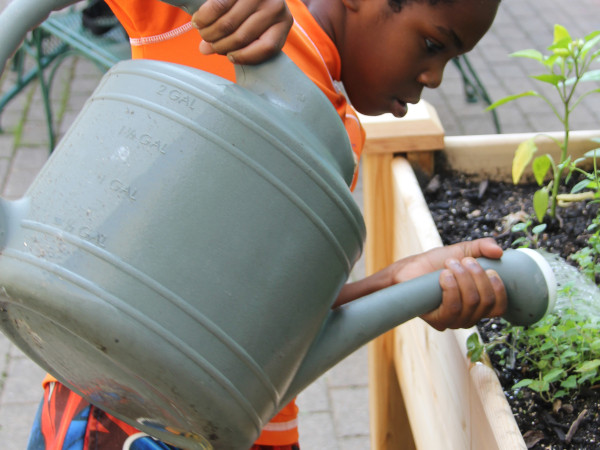 At Camp Maple, where I am working this summer, there is a small interior garden in the building. It is in a courtyard in the center of the building.

If you have never been in the DeHart Community Center, you’d never know it was there.

Recently, the women who maintain the garden asked us if we wanted to let our campers help out with the garden. Our campers are all boys and have different needs and intricacies so we weren’t sure how they would react to this. We told them that we’d try it out and see how it went.

Then, the day arrived.  The counselors discussed it ahead of time and made a plan so that we could see how it went and see how long the boys would be able to last in the garden.  We would stay as long as they could handle it.

It turned out to be the best day of the program up to that point.

The three women who run the program were patient and kind with the boys. They took them from area to area explaining the different plants that were growing. They each planted sunflowers which shouldn’t take much time to sprout. We weeded the cobblestones, watered the vegetables and added to the compost that they have created. One of the boys found a caterpillar that was just beginning to create its chrysalis. This fascinated all of the boys.

Each of those boys was engaged the entire time we were in there. They asked if they could come back again the next day.

In that hour, as I sat there weeding with the boys, I felt a calm come over me. I think the boys did too. They entered that garden and explored on their own. It seemed to make them calm and comfortable as they worked around the courtyard. While they were gardening, they were practicing social interaction not just with each other, but with grownups as well. They had the chance to play in the dirt and the mud as they squeezed the soil between their fingers so it was a great tactile activity for them.

All of the counselors noticed the change in temperament and attitude that came across the boys while we were in there. We decided to go back again. It would be a fun way to start or end each day. We wound up going into the garden at least two times a week to water, weed and track the progress of the plants.  Also, a big thing for the kids, was getting to take home some of the things that grew (basil, parsley, swiss chard).

The best part of the experience was that the campers were able to watch the progress they made in that garden as they come to camp each day and it gave them a great sense of accomplishment.