After 14 years as chair of the Maplewood Planning Board, Tom Carlson is stepping down. He was succeeded by longtime board member and former chair Jerry Ryan, who was elected on Tuesday night. Carlson, who has served more than two decades on the board, will continue to be a member. 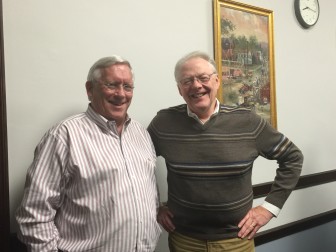 “I have enjoyed it immensely,” Carlson told Village Green just before the meeting, during which members also elected Ed Bolden as Vice Chair. “More important, I am humbled by the trust that the board has placed in my leadership for all those years. But now I’m looking forward to ‘taking a seat at the other end of the table,’ so to speak.”

Over the last few years, Carlson has presided with grace and equanimity over numerous contentious — and lengthy — planning board meetings involving the controversial development of the former Post Office site. (A continuation of an application by the developer to amend the site plan for that project was carried last night to the February 14 meeting, at the developer’s request.) 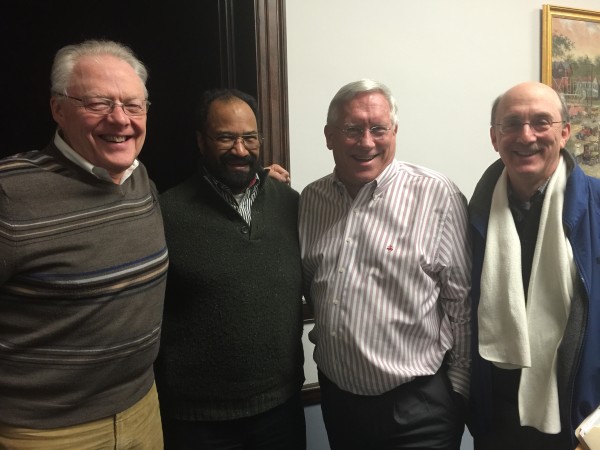 Ryan is a 23-year veteran of the planning board. “[He] is eminently qualified for the job,” Carlson said. “I am sure he will serve the board – and the town – very well in this capacity.”

Ryan was the Township Committee’s representative to the board for 13 years; he served for three years when he was Mayor, five years after being appointed by then-Mayor Fred Profeta, and was appointed again last year by Mayor Vic DeLuca. (Read more about Ryan’s long and illustrious history of public service to Maplewood here.)
“I am very happy to have the opportunity to serve as Chair of the Planning Board,” Ryan told Village Green. “This is a terrific group of people, and working with them is a real delight. I look forward to the work ahead of us.”
Ryan had the highest of praise for Carlson. “His service has really been admirable: the kind of knowledgeable, reasonable, steady leadership that he provides has been an important part of helping the board be as effective as it has been. I’ll be working hard to fill those shoes!”
Chair of Planning Board Jerry RyanEd BoldenJerry RyanJim NathensonMaplewood Planning BoardTom Carlson
0 comment
0
FacebookTwitterPinterestEmail