The long-awaited reopening of South Orange’s former Village Hall as a restaurant, beer garden and catering hall is now slated for summer 2022 – according to South Orange Village President Sheena Collum.

Collum posted an update to her Facebook page on August 26, stating, “I can’t thank you all enough for your patience and understanding as the redeveloper’s timeline has shifted due to a variety of unforeseen circumstances but we are expecting an opening of the new Village Hall Restaurant and Beer Garden in less than a year, likely Summer of 2022.”

“I remain incredibly excited for this new and exciting use, and grateful to Landmark Hospitality for undertaking a significant adaptive reuse of a historic landmark. Watching the spectacular details materialize has been particularly rewarding.”

The renovation of South Orange’s historic Village Hall has been a long and winding process.

Beginning in 2015, Village Green began reporting on the efforts to turn the former site of local government (and before that a fire house) into the restaurant and beer garden. In fact, a timeline for the project presented in fall 2015 initially estimated completion by mid-2017.

Historic designations and permitting, legal hurdles (including a lawsuit brought by a neighboring property owner in 2017) and COVID-19 have delayed the project. In summer 2020, Collum predicted an early-to-mid-2021 opening.

Despite the delays, local residents posted positive comments on Collum’s post, most of them appreciative of the careful restoration work going into the building.

“Personally I am astounded by the project,” wrote one local resident. “I spent 30 minutes watching a guy reconstructing the brick on the corner of the building, and he did an absolutely beautiful job. Care and craftsmanship. When he was finished it looked like original work. Probably an overstatement, but it looks like they’re really committed to making this as original as possible. And that is so gratifying as a resident that this may very well turn into a centerpiece of our town.” 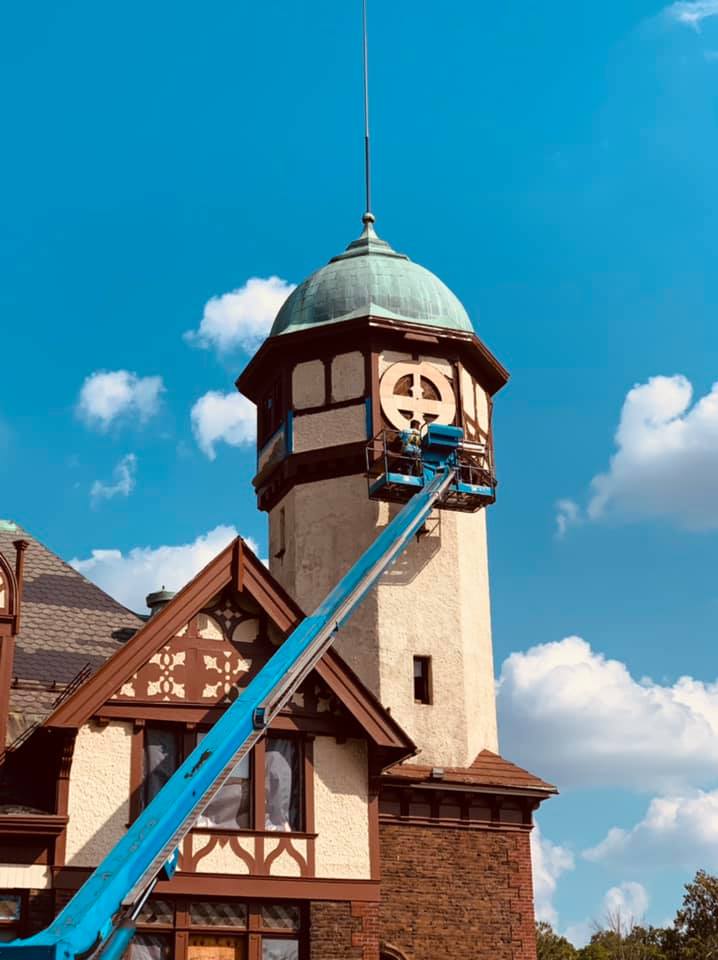 Village President Sheena Collum posted this photo of Village Hall on August 26, 2021, writing, “Here is a shot of today’s progress – restoration of our historic clock tower. The beauty of this building is being brought back to life.”