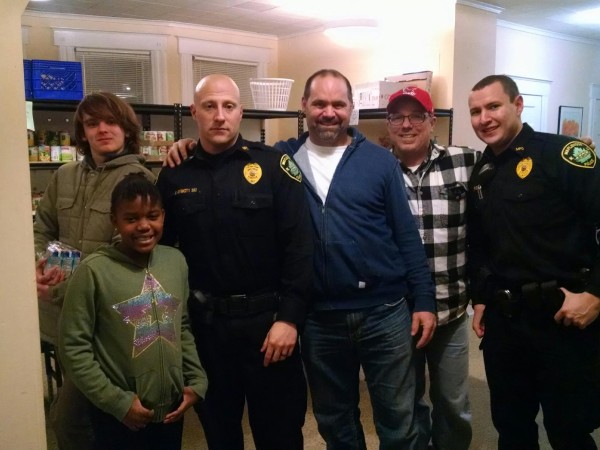 BackPack Pals was founded by Rent Party in 2011 to help children in need in South Orange and Maplewood by providing food for the weekend and holidays.

Run by Chris Dickson and David Wagner, Rent Party BackPack Pals provides child-friendly, shelf-stable food to “food-insecure” children in the South Orange-Maplewood School District. BackPack Pals has a relationship with social workers in each school throughout the district to identify students in need. Items are distributed in pre-packaged bags and placed in the children’s backpacks at the end of the school week.

The number of children supported by BackPack Pals each week has grown to 95.

Wright and Alexander hope that this is the first of many chances for the PBA to work with BackPack Pals.

“This is an awesome program and we’re excited to be part of it,” said Gyimoty.

Maplewood Police Chief Robert Cimino said that he assigned Wright and Gyimoti from their evening shift to work with the Backpack Pals “knowing what great work they have done with similar community efforts.” Cimino added that both officers are members of the Maplewood Police Crime Prevention Unit and are both very active in PBA Local 44  and community programs.

“Our new partnership with the Back-Pack Pals program is a great fit for the Maplewood Police Department, the PBA and the community,” said Cimino.

Although many of the children receive free breakfast and lunch in school during the week, the weekends can be a time of little to eat, said Dickson. BackPack pals helps to bridge the gap. 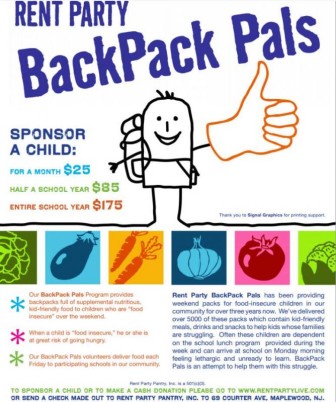 To sponsor a child or to make a cash donation to BackPack Pals, visit the Rent Party website or send a check made out to Rent Party Pantry, Inc. to 69 Courter Ave, Maplewood, NJ 07040. Those interested in volunteering, can contact David Wagner at bpp@rentpartylive.com.