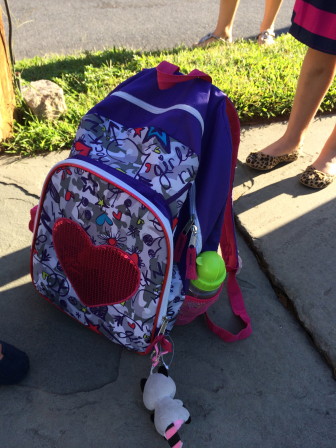 The toughest thing about fighting hunger in Maplewood and South Orange is that many don’t realize that the problem exists.

But it does, says David Wagner, director of BackPack Pals, Rent Party’s effort to send school kids in need home with food for the weekend and holidays.

BackPack Pals was founded by Rent Party organizer Chris Dickson in September 2011, with the aim to provide kid-friendly, shelf-stable food to in-need children in South Orange and Maplewood. Items are distributed in pre-packaged bags and placed in the children’s backpacks at the end of the school week.

“These children are typically those who receive free in-school breakfast and lunches during the week, but may face the prospect of a weekend without food,” Dickson told Patch back in September 2011. “BackPack Pals is an effort to bridge this gap.”

Back in 2011, Wagner began running the program as a stay-at-home dad. As such, he had the time to coordinate the volunteer food drives and packing events. Groups like Girl Scout troops were big helpers, distributing flyers, collecting food, and packing bags for students in need.

In Year 3 (Fall 2013), Wagner went back to work and outsourced the food procurement to the Community FoodBank of NJ: “The Community Food Bank does this for 6,000 kids throughout New Jersey,” said Wagner.

Now, Wagner is working part-time and is transitioning BackPack Pals back to its original model of local participation.

“We had lost the community involvement with the packing events.” Wagner said the drives and packing events were important in that they “raised awareness and created volunteer opportunities — especially for kids.”

Also, Back Pack Pals can once again be anonymous; the Community Food Bank required that forms be completed to qualify for the program.

An individual pack from Back Pack Pals

So how does BackPack Pals find the 70-85 kids who benefit from the program each year?

“We have a relationship with the social workers in each school throughout the South Orange-Maplewood School District,” said Wagner. In fact, after a recent meeting with all the district social workers, Wagner was touched by this action: “After the meeting, they called me back in the room. They had passed the hat and sponsored one child for the  year.”

Wagner is looking for more locals to organize BackPack Pals drives with their community groups. He’s also seeking sponsors for kids in need. It costs only $25 to sponsor one child for Back Pack Pals for one month, $85 for half a year, and $175 for an entire school year.

To sponsor a child or to make a cash donation to BackPack Pals, visit www.RentPartyLive.com or send a check made out to Rent Party Pantry, Inc. to 69 Courter Ave, Maplewood, NJ 07040. Those interested in volunteering, can contact David Wagner at bpp@rentpartylive.com.