The following is from the South Orange Performing Arts Center: 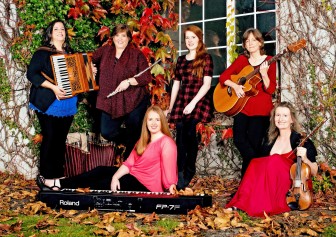 Grammy Award nominated Irish-American supergroup, Cherish the Ladies will perform at SOPAC on December 17, 2016 at 8:00 p.m. Called “passionate, tender and rambunctious” by the New York Times, Cherish the Ladies was formed in New York City in 1985 to celebrate the rise of extraordinary women in what had been a male-dominated Irish music scene. They have since toured the world, played the White House and the Olympics and recorded 16 albums.

Taking their name from a traditional Irish jig, Cherish the Ladies share timeless Irish traditions with audiences worldwide. In this program, the Ladies perform classic Christmas carols in their signature arrangements highlighting unique Celtic instrumentation, beautiful harmonies, and spectacular Irish step dancing. Together with their roster of regional, national, and world champion step dancers, the artistry of Cherish the Ladies has made them one of the most captivating and enchanting ensembles in the history of Irish music.

The all-female Irish-American band have grown from a one-time concert concept to a traditional Irish music sensation, literally the most successful and sought-after Irish-American group in Celtic music. They have been named Best Musical Group of the Year by the BBC, Entertainment Group of the Year by the Irish Voice, the Glasgow Royal Concert Hall’s International Group of the Year Award at the Celtic Connections Festival in Scotland and voted the Top North American Celtic act by NPR Radio’s “Thistle and Shamrock.” The Ladies have shared the stage with such noted entertainers as James Taylor, Joan Baez, Emmy Lou Harris, The Clancy Brothers, Tommy Makem, The Chieftains, and dozens of symphony orchestras. The Celtic Album, their collaboration with the Boston Pops Symphony led to a 1999 Grammy nomination.

Cherish the Ladies have recorded ten highly acclaimed albums. Their quintessential holiday album On Christmas Night was released to rave reviews and was chosen as one of the top Christmas Albums of the Year by The New York Times, Washington Post, The Village Voice and many other national newspapers.

SOPAC programs are made possible in part by the New Jersey State Council on the Arts.

The South Orange Performing Arts Center (SOPAC) is a 501(c)(3)charitable organization. SOPAC received funding through a grant from the NJ Department of State, Division of Travel and Tourism, visitnj.org.

Applications to be a Vendor at the South...