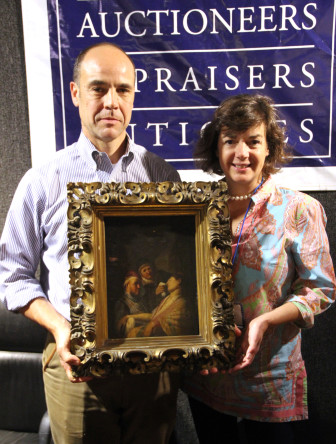 South Orange residents John and Kathy Nye, owners of Nye & Company Auctioneers in Bloomfield, were shocked senseless to learn that a painting sold at their auction house on Sept. 22 turned out to be an authentic Rembrandt.

The work has been discovered to be a lesser known work done by the Dutch Master as a teenager around 1625. It is part of a series of five paintings, each portraying one of the five senses. This one shows a woman who has fainted being revived by a man with a sachet as another man, possibly her husband, looks on, depicting the sense of smell. Only three of the paintings from this series are known to exist, this one is the fourth.

“This is the kind of thing that you wait for your entire career,” John Nye said.

Before the auction, the painting was part of what John sees on a regular basis – an estate with many items being sold by the children without much knowledge of the history behind them. The painting only measures 12.5″ x 10″ and has some paint loss and small cracks to the wood panel.

Nye says they often see excellent reproductions that still end up selling very well. He also explained that if an item does turn out to be something of this caliber, there are usually signs before the auction. There would be dealers and collectors asking for more information about the work or they might want more pictures beyond what is shown on the website. That didn’t happen. The estimated auction price for this painting was $500-$800; the opening bid was $250.00.

The bidding began as usual but then whittled down to two European phone bidders, neither of whom had seen the painting in person. The bidding continued in small increments, starting off by jumps of fifty or one hundred dollars and eventually climbing to the thousands. As the bids reached the hundred thousand dollar level the bidders volleyed back and forth raising each other by ten thousand dollars. The final selling price was $870,000 which, when combined with the buyer’s premium, becomes nearly $1.1 million. 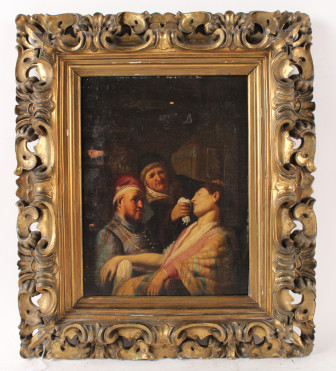 Even with all of the reality shows and media attention stories like this get, it is still very rare to stumble upon something so significant, unknown by the family, in a pile with other random pieces in a basement, Nye said. The story exploded in the European media and has made a splash here as well. There are articles on many art/auction websites and a podcast is available on the PBS Antique Roadshow website.

John and Kathy Nye acquired Nye and Co. several years ago from Dawson Auctioneers. Prior to that, John worked in many different capacities in the auction world including a stint as Senior Vice President and department head at Sotheby’s. He is also a frequent appraiser on the PBS series Antique Roadshow. Kathy Nye is an art historian with many years of experience appraising. She, too, has worked on Antique Roadshow, behind the scenes at the triage table vetting items of would-be guests. Ms. Nye can also be found backstage heading up the costume department of the Columbia High School musical where she has offered her talents for many years. She and John live in South Orange with their three children.