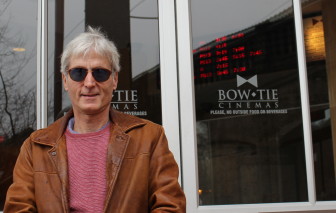 Toronto native Andy Myers — now a South Orange resident — has spent 30 years working primarily in film distribution/marketing both in Canada and the U.S. He has represented the likes of Sony Pictures Classics, New Line Cinema, Miramax, Samuel Goldwyn and Lions Gate and acquired and distributed such award-winning films as Dirty Dancing, Crouching Tiger Hidden Dragon, A Room with a View, Stop Making Sense, All About My Mother, Run Lola Run and You Can Count on Me, to name but a few.

“One of the things I did shortly after arriving in the US was co-develop a virtual film festival. We collaborated with Comcast, whose on demand initiative was in its infancy at the time and Chris Blackwell’s Palm Pictures,” Myers said. “As a result of the digital revolution, the number of orphaned films that had commercial promise was staggering. The virtual festival essentially served as an incubator for a selection of ten at a time — for a two-month window — during which our viewers were encouraged to vote for their favorites on the companion website. The most popular films were released theatrically thereafter by Palm Pictures.”

“They were extremely obscure films. But the interest in the festival was incredible-we were getting as many as a million views a month,” Myers added.

Myers noted that the streaming revolution that is impacting television is also impacting film. “The paradigm has changed, and it continues to change and that’s good for smaller films. But I think it’s somewhat fatuous for a filmmaker to think his or her film can make it via do-it-yourself distribution. While there are avenues, namely Netflix, Hulu, Amazon Prime, etc., without a requisite amount of energy behind it, which typically comes from conventional distribution, it’s extremely difficult to get on the public’s radar screens. There’s plenty of noise out there.”

Myers is hoping to add some energy and noise to South Orange/Maplewood with some original, provocative and often ground-breaking films and discussion. Reel Talk runs for eight consecutive weeks beginning on Sunday, March 15. The screenings will take place at 11 a.m. and feature a continental breakfast. Film enthusiasts can subscribe to the series by visiting the Reel Talk website at reeltalknj.org or go to the Bow Tie Cinemas box office. Currently, there are 16 films profiled on the Reel Talk website — all of which are slated for theatrical release later this year — from which the eight films will be chosen. Visitors to the website can vote for the films they’d like included in the series.

Myers said, “I’m trying to curate in such a way that there is a cross-section — at least one foreign film of import, a nonfiction film, independent films and maybe a mainstream film.”

“Bow Tie Cinemas and SOPAC have been very supportive of the initiative,” said Myers. Bow-Tie has been giving out promotional postcards at its locations in South Orange, Millburn, Montclair and Summit, and both Bow-Tie and SOPAC sent email blasts to their respective customers and subscribers.

Locally, Bob Zuckerman of the South Orange Village Center Alliance has already promoted the series on his weekly email newsletter “Village Vibe.” It had an impact: “Within minutes, dozens of people were on the site,” said Myers.

Reel Talk has some other secret weapons. One is a film literate audience locally. “I’m sure many local residents have attended Reel Talk-like series in New York and New Jersey.” Reel Talk is modeled after the New York Times Film Club, the New York Film Critics Circle Film Series, and Talk Cinema.

“I doubt it will necessitate a lot of persuading on our part to get them to subscribe. Reel Talk is long overdue here in South Orange/Maplewood, a community that is culturally driven and appreciates filmmaking at its best” (the series subscription rate is $180).

Other secret weapons include local film professionals such as Stephen Whitty — the Star-Ledger film critic, Millburn resident, and Chair of the New York Film Critics Circle.

“In a time when more and more movie theaters are showing fewer and fewer movies,” said Whitty, “it’s important to have a series that spotlights the very best of what filmmakers have to offer — and create a space where casual fans and serious cinephiles can come together and talk about the world’s most popular, and passionately debated, art.”