Abril Cocina, a Mexican fusion restaurant run by a Maplewood resident and chef, has opened in Maplewood Village.

Valadez Trevino, a culinary school graduate, worked for two years on some of the recipes, which he and Rosario — his culinary school classmate — have tweaked in a “collective effort.”

Rosario previously worked at Keens’ Steakhouse as well as Tavern on the Green under renowned chef Jeremiah Tower.

“We want to give people a more modern take on Mexican food,” that is “playful and impressive at the table,” said Rosario. 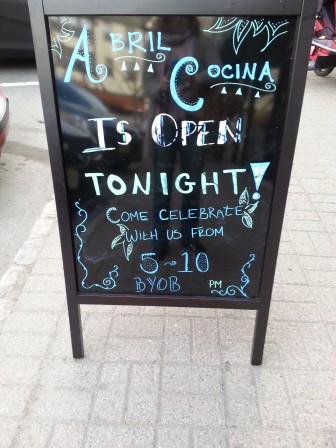 See the full menu here; prices range from $4.50 for a taco to $22 for the Lobster and Chorizo Burrito.

There is a small kids menu as well. The restaurant is BYOB; diners can bring wine that the kitchen will mix with fruit to make sangrias. They do not take reservations; however, diners can add their name to the wait list and the restaurant will text them when their table is ready.

The Gobernador is served smoked, and when it arrives at the table servers open the lid to let out the incredible aromas. “People love it,” said Valadez Trevino.

Creamy Tamal Colado is a spin on the classic tamale, but in place of the usual corn husk it is wrapped in a leaf of tender swiss chard and filled with succulent pork in adobo, served over a bed of tomatillo salsa and garlic crema.

“We roast all the salsa ingredients here and make everything fresh,” said Valadez Trevino. (If he can’t find the specific, high-quality ingredients he needs for a dish, it doesn’t make it onto the menu.)

Valadez Trevino got the idea for Pozole Pho from his travels in Vietnam. It is his take on the classic Vietnamese soup, made with bone broth and hominy.

The kitchen turns out 250 fresh corn tortillas a day. The chips, served with the housemade guacamole (sprinkled with pepitas for a bit of crunch), also are made fresh. The pork carnitas are cured for two days.

So far, the response has been very positive, and the restaurant has been very busy, said Valadez Trevino, who lives in the Village with his wife and two young children. Diners are saying the food is very high quality and a “different concept” from basic Mexican fare.

The chefs are being very creative in a very small kitchen, trying new things and seeing what works best. In fact, so much prep work goes into getting dinner ingredients ready that the chefs are waiting a bit until the kitchen gets its stride before introducing lunch. However, take-out will start soon, and brunch will soon follow.

The restaurant plans to offer more vegetarian options, as well as vegan and gluten-free (currently the menu lists all the dishes that fit those particular categories).

The spot, formerly The Laurel, has been freshened up with new decor. A mural by local artist Erin Rogers Pickering graces one wall. Everyone who works at Abril Cocina is local, including the servers and kitchen staff, many of whom are Columbia High School students.

“If you love really, really good food, you’re going to love what we do,” said Valadez Trevino.

The restaurant will have its official grand opening in early May.