Common Lot Will Serve Up Unique Dining Experience in Millburn

Australian chef Ehren Ryan is thrilled to see two years of plans and dreams come to life before his eyes on the corner of Main and Essex streets in downtown Millburn. 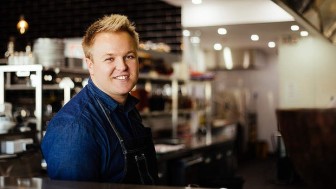 After spending more than a decade cooking in kitchens around the world, the innovative chef has put down roots in Chatham and anticipates his new casual yet upscale restaurant, Common Lot, opening its doors (and breaking out the liquid nitrogen) in late winter or early 2016.

So, just how does a chef from Sydney come to hang up his toque in Essex County? Ryan’s parents live in the area, and while visiting them over the years, he says he came to view Millburn as the perfect spot to establish his restaurant.

“It’s a really nice town with a great demographic. We’re so excited to bring high quality service and great food in a relaxed environment,” he says. “A lot of people in the area appreciate fine dining but don’t always want to travel to Manhattan. We’re just a ten-minute walk from the Paper Mill Playhouse. It’s a prime location.”

Speaking of his family, Ryan says his parents have been extremely supportive of his new venture. His wife, Nadine, will manage the front of the house.

“We work quite well together, fortunately,” the chef says.

As excited as he and his family are about sharing their cuisine with fellow foodies, Ryan says he’s not rushing the construction as he’d rather “get it right” than experience any hiccups once the 62-seat eatery opens.

“Our architects are Studio 1200 of Millburn. They have designed the exterior and interior of this project and they have been nothing short of amazing to work with,” explains Ryan.

An upstairs space will accommodate overflowing dining and also serve as a library for the treasured collection of cookbooks the chef has amassed throughout his travels.

While exuding a comfortable, laid-back vibe, Ryan explains that he also wants to offer diners an intimate, one-of-a-kind experience. To that end, a “Chef’s Table” which seats four, will give guests an intimate view of the culinary team at work. Watching Ryan employ liquid nitrogen, which flash freezes foods to preserve texture and taste, is just one of the techniques culinarians can enjoy. 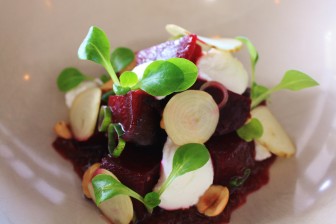 “You basically purchase the seat and you sit right at the kitchen, opposite me,” Ryan explains. “It’s very personal. You can choose three- or four-courses or the nine-course tasting menu depending on how you feel. There’s a lot of interaction and a bit of theater.

“With some of the food, you’ll have to get involved and make it yourself. We might give you fresh herbs that have been hit with a little liquid nitrogen and you’ll grind them in mortal and pestle and then coat a sorbet with those herbs. It’s very hands-on and a very unique experience.”

Thanks to the expansive windows overlooking the corner of Main and Essex, passersby also will have a chance to enjoy watching Ryan and his team prepping and creating the American-style cuisine that boasts both Australian and Asian influences. 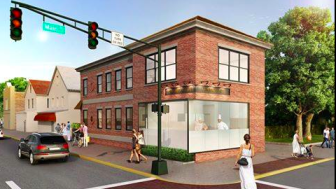 Common Lot, a casual yet upscale eatery, will open at the corner of Main and Essex streets in downtown Millburn.

“The kitchen is open and on full view. It’s designed to be watched,” says Ryan.

While initially the eatery will be BYO, Ryan hopes to obtain a liquor license in the future. In anticipation of preparing some refreshing, fruit-infused beverages and cocktails, the chef is in the process of preserving plums and peaches while they’re in season.

“We’re in constant contact with farmers markets to locate suppliers and we’ve been busy pickling, juicing, and preserving as much as possible in the season so we’ll be ready when we open,” he notes.

While initially Common Lot’s  name might seem like a nod to the shared plate concept that permeates the menu, Ryan explains that it denotes “a shared space serving the general public.”

“We love the meaning behind the name,” he says, “and its very true to us. We’re super excited to open up and get involved in the community.”

Makers Fair in Downtown Maplewood Kicks Off the...