“We are thrilled to welcome these two new retailers and celebrate the new spaces of two of our existing merchants, just in time for the holiday shopping season,” said Cat Delett, executive director of the Maplewood Village Alliance. “With the addition of the treasure trove that is Magnus Comics, the charming Murrray and Finn, and the beautifully curated new MEUS and City Workshop spaces, Maplewood Village continues to provide a unique and delightful destination for residents and visitors alike.”

New retailerMagnus Comics brings a huge selection of comics and collectibles to the upstairs location at 155 Maplewood Avenue, above Roman Gourmet. Visit the website for hours of operation. Not only can you buy one-of-a-kind items, you can sell them too: “Bring us your cool stuff! Currently buying unique and vintage toys, comics, collectibles, and novelty items. Not sure what you have? Come in for an appraisal and potentially leave with cash!” 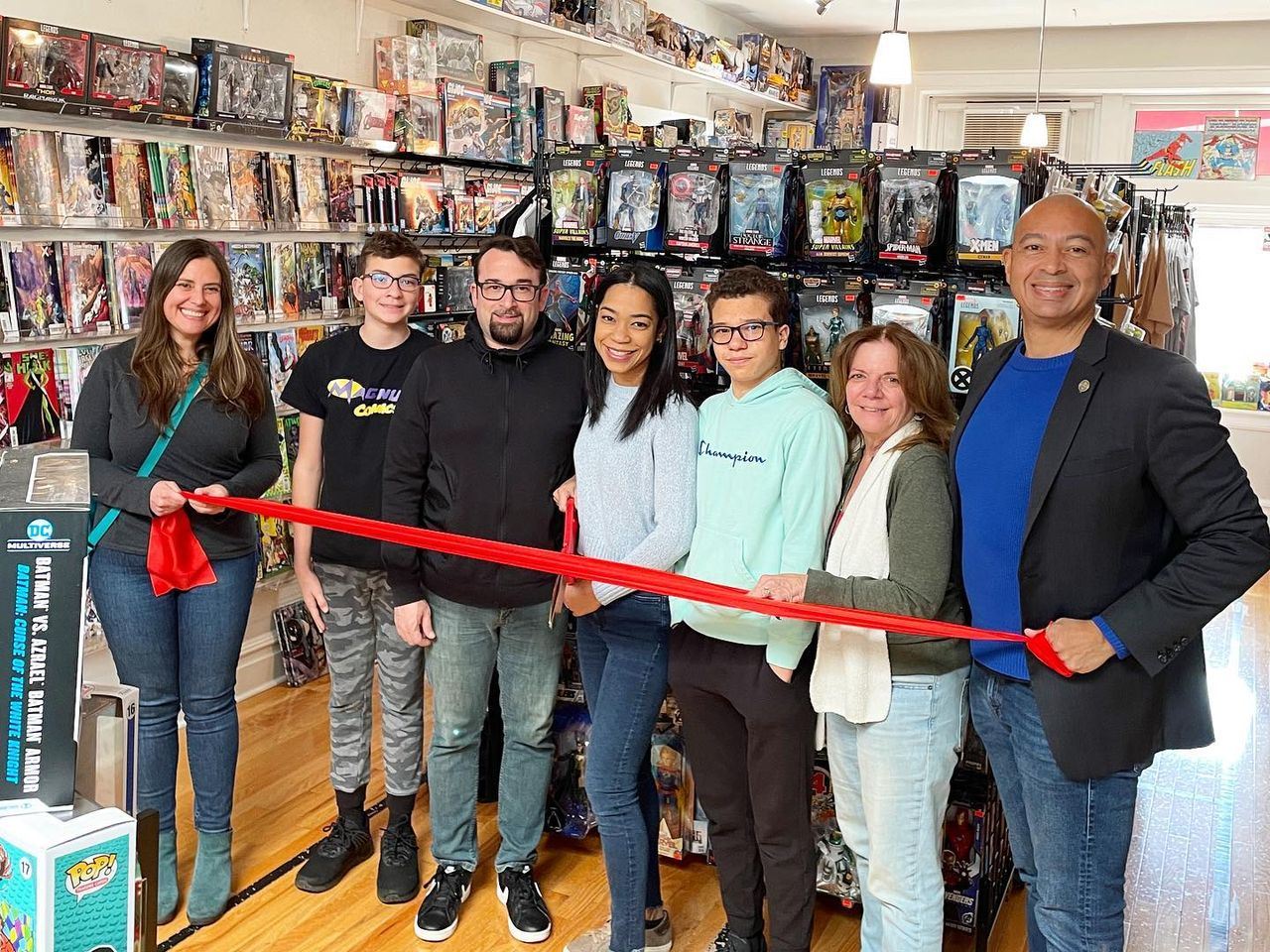 Murray and Finn is an “adorable and beautifully merchandised” women and children’s clothing and items store at 98 Baker Street (the former MEUS space). From the website: “Murray & Finn was born out of a love for thoughtfully designed pieces for women and children. We have carefully curated a unique selection of clothing, toys, and accessories from all over the world. We appreciate simple, beautiful, well-made pieces that can last a lifetime. We hope you love our selection as much as we do.” Store owner Erica Finnan is a former school psychologist and mother of Josie and Phoebe. 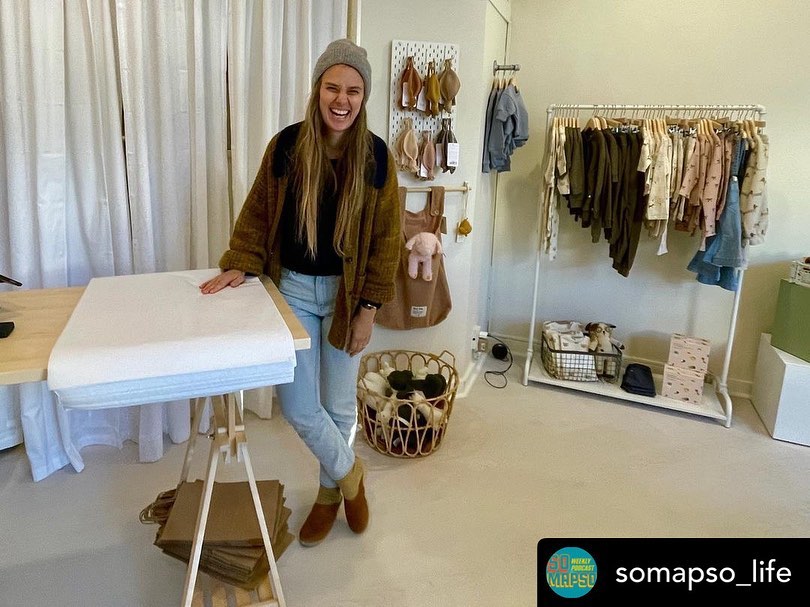 On social media, Marichelle Hills of MEUS waxed poetic about the new center counter in her luxuriously larger store:

Hollie and Victoria of @spacesbyhollievelten conceptualizing the center counter. Our wrap around counter that sits in the middle of our space is my favorite feature – it is like the cozy kitchen in a home where everyone ends up congregating. It represents what Meus has always been to me, a welcoming and inviting space where (although it’s not a restaurant) at its heart – she gently whispers “anak, kumain ka na ba?” Anak means child, son, daughter but in my filipino culture you don’t need to be blood related. It is an endearment often used towards someone you care for and is younger than you. “Kumain ka na ba” means have you eaten yet? Culturally, food is our love language. Anytime someone came to our house, my mom would offer them something to eat and drink. She was relentless and would often not take no for an answer. I hope this spirit comes through when you walk into Meus. 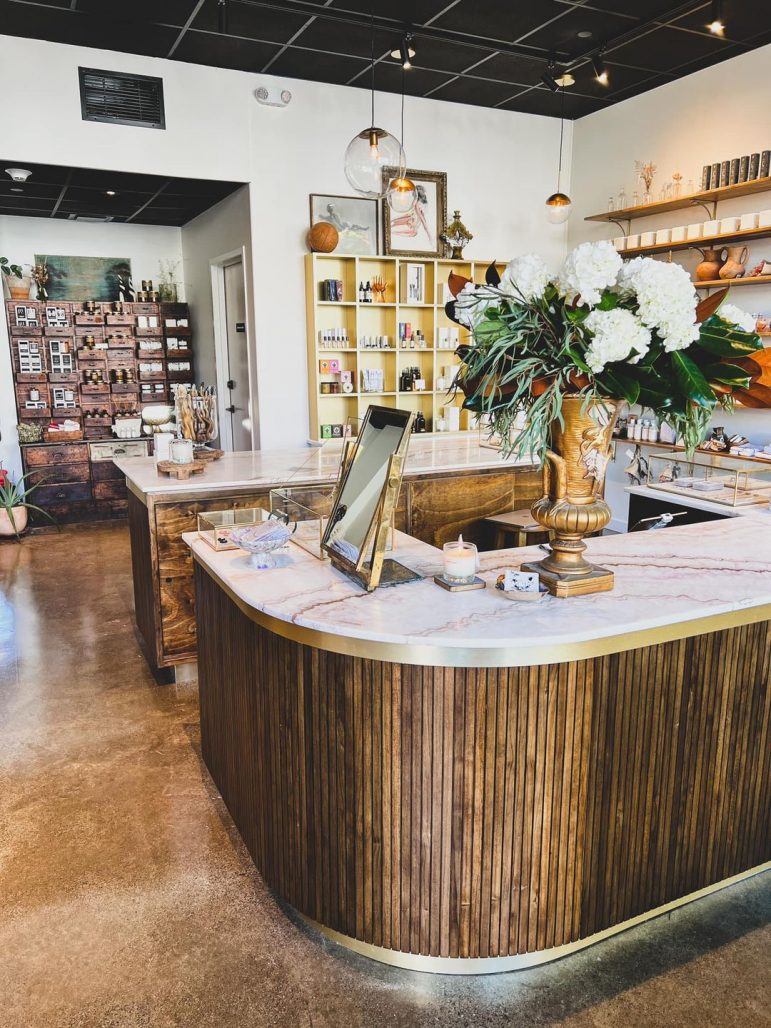 MEUS, which had been operating for several years at 98 Baker Street, is a home and lifestyle shop that that sells and supports the work of independent artists. “At its heart, MEUS offers the simple pleasures and luxuries that honor the ritual of gift giving: to oneself and each other,” says Hills.

Hills has long been a champion for shopping small and shopping local. Not only has she brought along City Workshop to the new space, but, says Hills, “I will also be launching a community-based arts space on the second floor in the new year.” Stay tuned!

Meanwhile, City Workshop Mens Supply Co. owners Roger and Josefina Ruiz Stevens, who opened the Maplewood shop at 92 Baker Street three years ago, are dedicated to classical American workwear. Think: selvage denim and flannel. “I’m not a fashionista,” says Roger Stevens, “but I have a sense of style. I would wear 99% of our inventory.”

Three years ago, Stevens told Village Green, “People like being able to come into our store to touch and feel the clothes before they buy them.”

Now there’s that much more to touch and fell at the new 104 Baker Street location.