Blog: Fighting by the Seat of Our Pants Against ALS, a Formidable Foe

Editor’s note: Meg Marlowe is a South Orange resident. The Village Green has edited some of this blog for brevity. Read the entire post and more of Marlowe’s blog posts here.

Saturday is the 7th Annual Rock to Defeat ALS Concert at the South Orange Elks Club a fundraiser for ALS. Read more here.

I know the title of this blog post is strange. I wrote this… for Arts Unbound’s Story Slam. I knew I was going to do the story slam for about two weeks now, but only prepared for it the day of. It’s been a crazy kind of time around here, and I am flying by the seat of my pants, which was the original name of this story. When the story was finished, I liked it enough to keep it, but had to change the name. This one works. It’s really what we all are doing when we are battling as formidable a foe as ALS.

[Last Sunday was] the Walk to Defeat ALS in Saddle Brook. This is my 8th or 9th year walking. The team’s name has gone through a few changes. First it was “Lainey’s Legacy” for my Mom, Elaine Kall Marlowe (nicknamed Lainey) who succumbed to this disease in 1983. One year it was Lainey and Lorraine’s Legacy, as we had a Co-Captain who lost her Mom to ALS. This year, we changed the name of our team to SO/MA’s Legacy to reflect all those in our community of South Orange and Maplewood who are suffering with this devastating disease, and those who once lived here, but ALS took them from us. 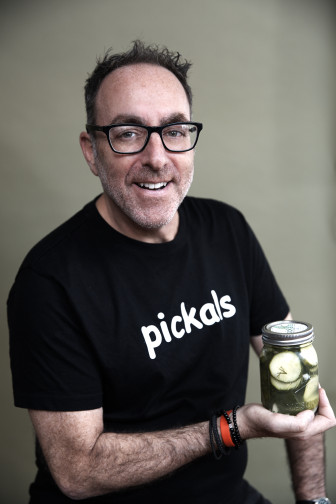 My friend Arthur Cohen is battling ALS, as was Dave Adox, who very recently lost the fight for his life. I only met Dave once, but have spoken with his husband a few times, and met some of Dave’s family and friends. Here was a young man enjoying life in the finest way possible: with a loving partner and family. He was the type of man who kept in touch with schoolmates, many years after school ended. He was concerned with the well-being of others. When his elementary school classmates found out that Dave was suffering with ALS, many of came to see him and stayed to help.

At his Shiva, I saw wonderful pictures of Dave growing up. Many pictures of traveling, many pictures of friends…lots and lots of friends. And all the pictures on Facebook after his passing showed just how many people loved him and felt a tremendous grief at his loss. He was such a wonderful friend to so, so many. Dave lost everything to ALS at a very young age, but he never lost his spirit, or his love. Arts Unbound partnered with Dave’s husband Danni for an Art Bender a few days before Dave died, and a mural was painted on my old apartment building on Irvington Avenue in South Orange. Dave was so happy to be there. I saw the pictures and thought how wonderful that he could see it.

My pal Arthur amazes me and reminds me so much of my Mom, who never gave up, and always believed a cure would come. Arthur lives in a different time than Mommy did though, thank god, although he may not be able to see it in everyday things. People still may stare at him, or not understand that inside his atrophying body is the same man with the same brain that he had the day he was diagnosed. ALS rarely affects the brain, which remains lucid throughout this cruel ordeal.

I would venture to assume that Arthur is probably a better, more enlightened man now than he was on that dreadful day. He now has firsthand knowledge of the temporalness of life. Not just of being alive, but of what we have, who we are, and what we have come to expect as our normal. And did Arthur find out he was sick and just give up? NO. This man said, “Okay, I have one of the worst diseases known to man. Let me start a business, and give the proceeds to The ALS Association to help others like me, to help find and supply treatments and ultimately, find a cure.” Did he just tell everyone, “Please do this for me?” NO. He has been actively involved in the creation and operation of PickALS, his pickle company, since Day One. I always tell him that I think he is a force of nature. But sometimes it is nature, organic or mutated, which forces us to make that choice: Lie down and take it, or take action. Arthur is the epitome of taking action!

In 1980, when my Mom was diagnosed, many had never heard of ALS….The disease is still considered rare by the CDC, with approximately 5600 new diagnoses a year, roughly one every 90 minutes. But look at this way: This is one of the worst ways to live and die that I know of, and every 90 minutes someone is told they are going to have to go through this…and every 90 minutes, someone is losing their battle with ALS.

So this disease disposes of its victims, and then regenerates itself with new ones. The average life span for those suffering with ALS is 2-5 years. That’s some chilling statistics to me.

Mommy didn’t know all the statistics, because it was a relatively unknown disease at that time. She just knew that she and a few of her neighbors were doomed to spend the rest of their short lives in the prisons that used to be their active bodies. Mommy had Bulbar ALS onset, which first manifests in changes in voice and speech, with a harsh, hoarse or strained voice. She thought she had a sore throat. She was auditioning for Off-Broadway and to join a prestigious theater group which would help her reach her goal of BROADWAY! Finally she would achieve her dreams…

…after several tests, is told she has ALS – Amyotrophic Lateral Sclerosis. What does that mean to her? What does that mean to us? Not so much, except we are told that it’s fatal and there is no cure. That’s a sucky thing to hear when you are 55 years old and just about to start on the life you always knew was your destiny.

Mommy was not as active as Arthur is when she found out she had ALS. She was never involved in fundraising, or trying to find a cure. People did stare at her all the time as if she was an invalid. She was not an invalid, dammit. She just couldn’t walk, or talk, or really move. But she could communicate; at least on paper, at first. When she still could use her hands, she wrote in her journal, “It’s so hard to lose your voice when your whole life’s work is based on communication.” Later, she had an alphabet board that she could move her eyes across to pick out letters and spell out words and sentences. But to be an actress, a director, a writer, a lector, or many of the other roles she played without speech…it was a tragically ironic fate that befell my Mommy.

Still, she insisted on living as normal a life as possible, and that included going to places and doing things the same way she always had. Except that in the early ‘80s, there were no real accommodations for the disabled, as we were just beginning as a society to ‘learn to be tolerant’ of people who were ‘different’…. People stared at Mommy in her wheelchair, and spoke to her as if to a child. They didn’t know. They weren’t taught that what you see does not always inform what is really going on.

She had always gone to plays; she was not only an actress, but a lover of the arts. We went to a play right in South Orange, with her neighbors. I wheeled her in and sat next to her. She made some noises because she had such a terrible time trying to breathe. People were turning around in their seats and giving her the stink eye. The stink eye! To my sainted mother who just thought maybe that she wasn’t dead yet. She thought that maybe that she could still enjoy her life while she was on this side of the grass. She was dejected.

PLEASE remember that this disease can happen to anyone. That a wheelchair can happen to anyone. LIFE happens and things happen. I had a friend who worked for a rehabilitation center. He told me that the patients there called us, “TABS” – Temporarily Abled Bodies. I like that. Because it reminds you that you are not special. You have just been lucky so far.

I will fight with Arthur, and with the Daves and Mommys and all those who choose to claim quality of life for themselves, even in the crappiest of times. And possibly the most cliché thing I have said so far, though I would have to go back through my notes to be sure: PLEASE remember to be grateful for what you have, and love your friends, kids, family, LIFE. Tonight. Always.