Making a Commute With Twin Babies Work on MidTown Direct 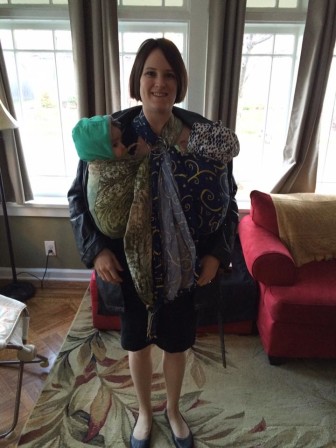 Being the subject of a social media conversation is usually not a good thing.

Unless you are Erin Elmouji.

Elmouji is a lawyer who works in Midtown Manhattan and lives in South Orange, NJ.

She is also the mother of six-month-old twins Aya and Zaina, whom she totes to work each day using two slings (toddler Nadine attends local daycare). Elmouji recently and unexpectedly became the subject of glowing commendations on the Facebook group Swap SOMa Lounge for her stupendous commuting prowess.

“I need you to know that there is currently a woman on the train with TWIN babies both in slings on her chest at the same time and her bags full of stuff for said TWIN babies all taking up exactly: ONE SEAT! So I guess what I’m saying is, there are still some awesome, unassuming human beings on this commute,” wrote Liz Lewis Haller, the originator of the thread. Haller was posting about Elmouji as an antidote to other threads about rude commuters hogging extra seats on standing-room-only trains.

Others quickly chimed in:

I know her. She’s a super hero.

Wow…that deserves a medal or at least a free ride!

I take jitney with her too! She’s amazing and always smiling and so pleasant.

This person deserves a parade. Whoever she is. I’ve never even tried to do NJT with twins alone. Standing O, woman!

Friends clued Elmouji in on the thread and she soon responded, posting the picture shown here and writing, “Thanks for all the love here — really enjoyed reading everyone’s comments! See you all on the train.”

We caught up with Elmouji via email and asked her if she was surprised by the thread. “I suspected we were becoming a bit notorious from the stares and whispers we got on the commute every day,” wrote Elmouji.

Via phone, Elmouji explained more about her commute.

Her firm provides three months of onsite daycare for employees returning from maternity leave — an offer too good for a nursing mother to pass up. The twins and Elmouji are now one month into the gig, so locals have just two more months to catch the trio on the train. After that, Aya and Zaina will be in local daycare with their big sister.

Fortunately, before attempting the twin trek, Elmouji had some experience commuting with an infant; she did the same with Nadine when she lived in Brooklyn. However, twins presented a greater challenge and the move to South Orange presented a longer and more varied route. Elmouji tried several twin carriers, but after researching on the internet, settled on using two slings.

“It’s not the most comfortable, but it’s a lot easier than any other alternative,” said Elmouji who points out that a stroller would be impossible in transferring from jitney to train to subway (yes, she needs to go a couple of stops once she hits Manhattan).

Her husband Adil prefers using a twin carrier when he brings the babies in (you can look for him on the train from time to time as well).

“For him, for some reason, the slings are almost too primitive. It’s funny — he’s from Morocco,” Emouji notes, where slings are commonly used. However, she reports that Adil “likes the buckles and straps.”

Wrangling two babies on crowded transportation seems a Herculean effort, but the self-effacing Elmouji says, “They adjusted pretty well to it. They are pretty comfy. I think they like the stimulation and the motion puts them to sleep.”

The sleepiness of the babies probably explains some of Elmouji’s popularity with her fellow commuters. Still, she knows enough about babies to always avoid the quiet car.